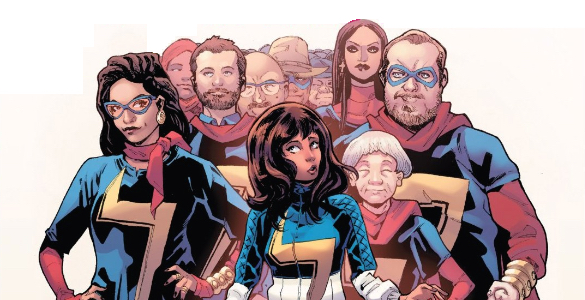 How does an issue of Ms. Marvel work without Kamala? Well, in the case of Ms. Marvel 25, I’d argue that it doesn’t. There are moments here that feel unmoored, floating in a pool of heightened drama without the grounded tether that Kamala offers when she is the center of the narrative.

One of the plot points in this issue has to do with Kamala’s weekly sandwich delivery from Naftail. Kamala’s friends go crazy for this sandwich. I don’t blame them. It sounds delicious. But their intense feelings about the sandwich feel out of sync with the more restrained way that they are dealing with the fact that one of their best friends “dumped” them. One panel in particular struck me as beyond the pale. 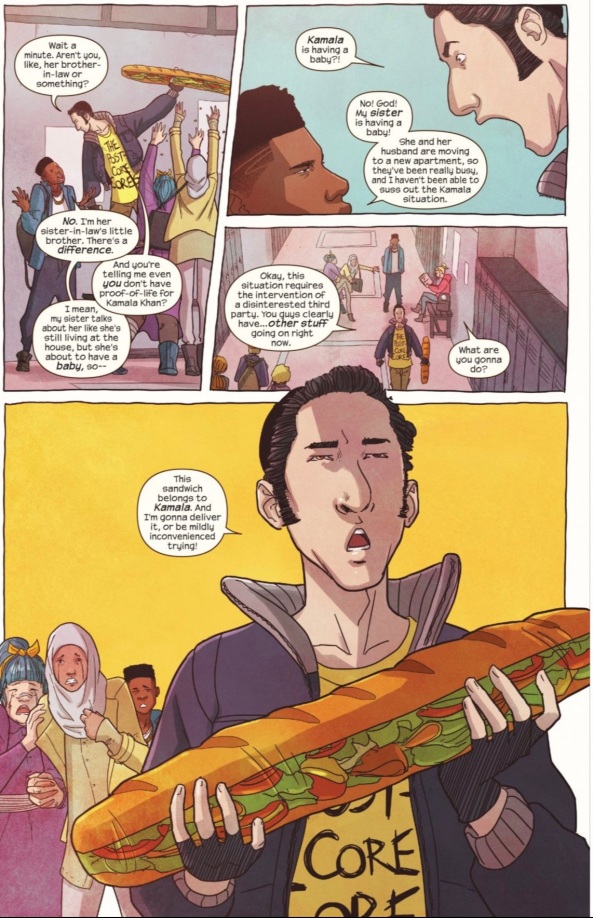 The teens are literally sobbing in the hallway as Naftail takes away the sandwich. While this could be a funny bit for a crew of side characters, when they are the center of the story, it reads as bizarre. Yes, that bread looks like crusty heaven, but when these guys are dealing with the sudden withdrawal of a close friend and taking on the work of a missing superhero, shifting them to caricatures cuts them short.

Also pushing hard into crazy-town is the opening scene. Wilson orients the reader to this arc by presenting a parole board that is apathetic, bordering on evil. I guess we are being offered a glimpse into the dangers of bureaucracy and perhaps the cost of preventing crime is saving criminals from acts that have long term consequences? It reads like a very dark take on the criminal justice system and this kind of cynicism runs counter to my expectations from this book. This could be the effect that G. Willow Wilson and Nico Leon were going for all along. I finished this issue missing Kamala more than ever.