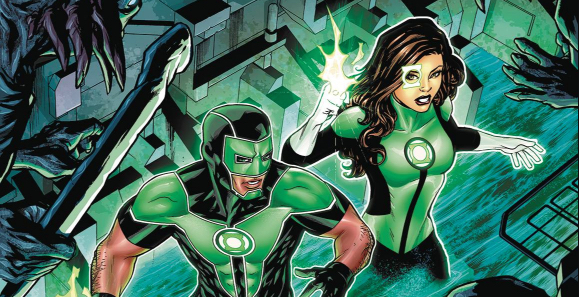 “I conducted my own investigation because no one listens to me. I got away with it because no one looks at me. Because, unless I have your reports, your coffee or your lunch, I’m invisible.”

Patrick: Part of what I love about the short-lived Agent Carter television series is that, when it wants to, it can be thuddingly obvious about its themes and values. Peggy is a bad-ass super-spy often overlooked — or worse, taken advantage of — because she is a woman in the 1950s. The show loves putting these blatant statements of gender theory in Peggy’s mouth, but only once the show itself has actually demonstrated what she’s describing. It makes for an exhilarating story that embodies complicated values: having fun and having something to say at the same time. Green Lanterns 37 has an awful lot to say, but has not quite mastered how to have fun saying it.

There are a couple failed attempts at injecting more traditionally “fun” elements into this issue’s non-stop exposition geyser. The lanterns’ handler insists on sparring with them while laying out the political climate of Ungara. Writer Tim Seeley is tapping into some loaded ideas, casting the Molites as refugees unable to adapt to Ungaran customs and being perceived as criminals. There are protests in the streets, decrying both the Molites as non-assimilating criminals and those that welcome them to their planets as “Universalists.” I’m all for a obvious parable about the dangers of nationalism and isolationism, but the graceless parallel-drawing really needs to wait until after we’ve seen something happen. We don’t see a single Ungaran interact with a Molite in this issue. Not once. We don’t see how Molite customs offend the Ungarans, but we are told that they do (during an unrelated sword fight, as though that makes it more interesting).

The issue’s biggest failing is in its final-page reveal, which clues the reader and Baz into Liseth’s true identity. She takes partial responsibility for the killing the Molite leader has confessed to, and in so doing, reveals herself to be a member of Red-Tide, the Ungaran-supremacy group. Seeley and artist Carlos Barberi have kind of a backwards reveal on their hands, having not already established what Red-Tide is. Liseth describes the group as she’s confessing to being a part of it, which is about as effective as Darth Vader having to explain what a father is after revealing himself to Luke. Having already played the violence card to make an exposition-dump interesting, Seeley and Barberi try playing the sex card:

It’s a classic case of telling instead of showing. And no about of sex or violence is going to cover that up. I desperately want a Green Lantern tale with parallels to real world global political issues, and white supremacy and islamophobia are topics everyone should be dealing with right now. Just, y’know, make the story work first.