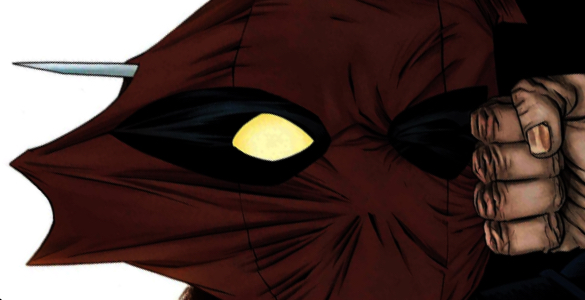 Back in high school english class, I was daunted by the idea that every work of literature alludes to earlier, more foundational works. How could I ever understand the meaning of a novel if I haven’t also read the novels it references, and the novels those reference and so on and so on. I’m still fascinated by the notion that every work of art has an ever-branching family tree of influences, but I’m less concerned about missing them — a work lives or dies on its own merits, so if I don’t “get it,” I’m happy to pin that on the work itself. I have a largely similar attitude to comics, where general familiarity with the character and the world might be a safe assumption, but a given issue can’t take for granted that we’ve read any other comic, let alone one from years ago. And yet, comics also has this rich, ever-growing continuity that can (and some might argue should) inform every character’s identity. Such is the case with Deadpool Vs. Old Man Logan 3, which draws upon writer Declan Shalvey’s own personal history with Wade Wilson in one of the most rewarding ways I’ve seen in years.

In the middle of the issue, Wade and Logan are knocked out by the goons they’ve been chasing since the start of the series, leaving Wade to “what may have been the worst dream” he’s ever had:

It works fine as some kind of vague past trauma, but fans of Shalvey’s Deadpool work will immediately recognize this moment from 2013’s Deadpool 18, where Wade discovers the body of his former lover and fears the worst about their daughter. It’s a harrowing moment, still imprinted on my memory after all this time, but it’s also somewhat of a deep cut at this point. With four years and two volume (re)launches separating that issue from this one, there’s no guarantee that this particular reference will land (which would certainly offend Wade himself).

Instead, I might argue this moment as an important piece of autobiography — not for Deadpool, but for Shalvey. Or, at least for Shalvey’s relationship with Deadpool. He’s revisiting this formative moment, not because it’s important to our understanding of this issue (though I’d argue that the parallels are actually quite beautiful), but because it’s important to his understanding of this issue. This is his gateway into telling stories with this character, the seed from which all of his other stories must grow. I suppose that may be my own projection — I think Shalvey’s run on Deadpool way back when might have had that formative influence on my own interpretation of the character — but the joy of allusions isn’t just that we get them, but that we get to interpret them. Whether our readings of the significance of that memory speak to Wade’s values, or Shalvey’s, or our own, the point is that it’s significant. That’s clear enough, even if Wade (and Shalvey) snap right back to cracking jokes on the next page.

3 comments on “The Specificity of Allusions in Deadpool vs. Old Man Logan 3”