While organized religion is well known for rigid rules and requiring blind faith and obedience, I’ve never thought of them as qualities inherent to actually worshipping God. Malachi 3:10 implores worshippers to put God to the test in order to see for themselves the blessings he’ll bring those who love Him, while Genesis 18 describes a lengthy exchange between God and Abraham where Abraham continually questioned God’s intentions to destroy the cities of Sodom and Gomorrah, bartering for the lives of any righteous who might be in the city. I can really only speak for Judeo-Christian religions, but the point seems clear nonetheless: asking questions certainly seems to be an acceptable part of navigating faith. Forbidding questions only serves to empower men with agendas, as is the case in Simon Spurrier and Caspar Wijngaard’s Angelic 4.

One thing about Angelic‘s protagonist, the young monk Qora, which I’ve always found interesting is the fact that, no matter how much she questions her faith and no matter how much her superiors look down on her as being “nobedient,” Qora actually believes in the Makers with all her heart and wants what she’s been taught to be true. Her many questions are just her trying to understand commands that don’t make sense or seem cruel to her, and even her seemingly rebellious mission with Complainer is just her trying to prove that there’s worth in asking questions at all.

Qora’s right that there’s good in questioning even deeply held beliefs. As Qora’s learning, the monks’ beliefs in Angelic are based on some pretty flawed understandings of their past, on history that’s been twisted and distorted. Asking questions is essential to rooting out the truth, even if the truth about the Makers pains Qora to learn.

Meanwhile Alfer, the leader of the monks, demands explicit obedience and zero questions, and it’s a tactic he uses to retain complete control over the other monks. 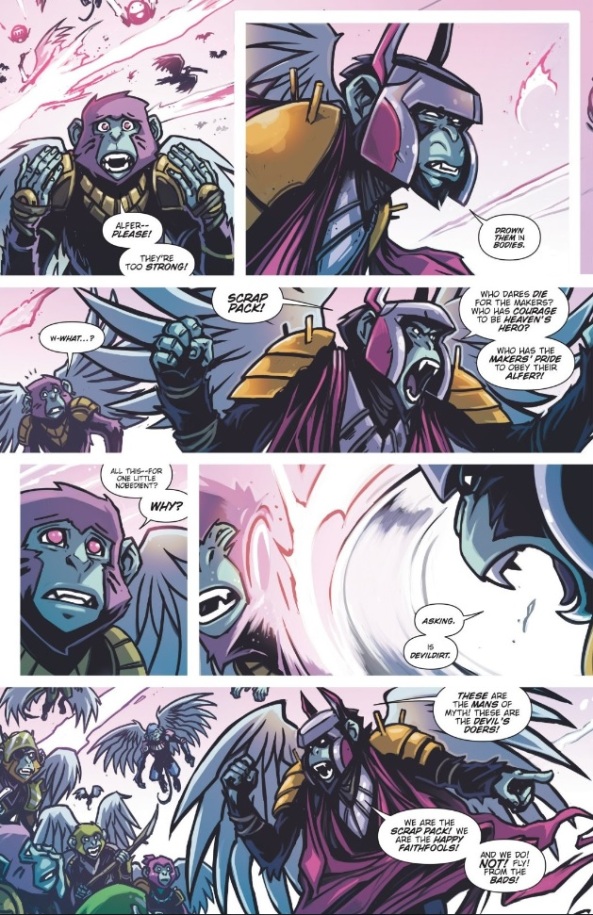 Whether Alfer truly believes in the lore or not is unclear, but also irrelevant — the lore benefits him, so he’ll lash out savagely at anyone who dares question it, because questioning the lore is questioning him and putting his grand lifestyle at risk. He’s willing here to sacrifice entire troops just to put Qora in her place, to get back his newest wife and punish her for daring to question him. As always, his actions and strict dogma only benefit himself.

The point seems clear: question authority. Rules are put into place by people for very specific reasons, and it’s vital to question those reasons and understand anything we obey or believe. The conclusions we come to may differ and are entirely our own, but blindly following commands only gives power to men like Alfer, whose wickedness thrives because nobody dares to question them. That’s not something any of us should abide.