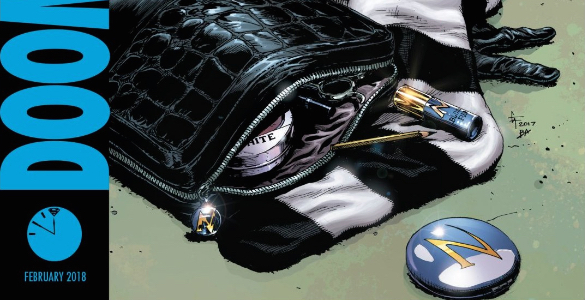 Michael: It seems that the divisive issue this holiday season was not about the fictitious “War on Christmas” but instead about your opinion of Star Wars: The Last Jedi. I’m fascinated by the varying differences of opinions on this film. One of the most popular criticisms amongst detractors is that it didn’t meet their expectations. Some Star Wars fans might have given The Last Jedi a small margin of potential victory where the film was both different and spiritually the same to the original films. I’m reminded of this intense desire for both nostalgia and innovation in Doomsday Clock 2.

Doomsday Clock 1 beautifully set the stage for the post-Watchmen world, and in issue two our “heroes” have abandoned it for the DC Universe that we know and love. Adrian Veidt meets up with Lex Luthor, Rorschach comes face to face with Batman — what more could you want? Geoff Johns meets the expectations of what you’d hope for in a story like this, but it would be a mistake to simply label it as a crossover. Instead, he introduces these characters to one another in a way that both services the story and the integrity of the characters themselves. Johns doesn’t dumb down the script in the slightest for the sake of simplicity and accessibility.

As great as these character introductions were, I found that one of the most memorable parts of Doomsday Clock came from the new character of The Marionette. 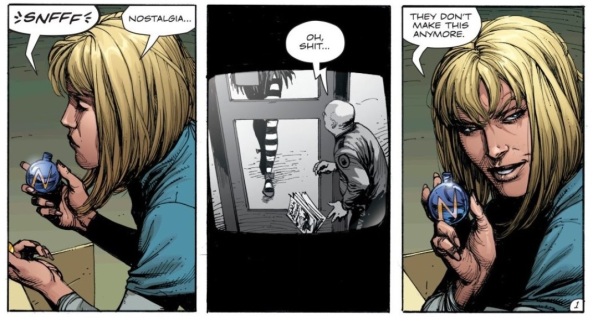 Marionette finds an old bottle of one Adrian Veidt’s signature products: Nostalgia perfume. I feel like this disjointed sequence — split up on the bottom of one page and the top of another — is symbolic of both Doomsday Clock and Watchmen as a whole. “Nostalgia…they don’t make this anymore.” What a delightful mindfuck that is. Is Johns saying that we champion books like Watchmen because we’re nostalgic for nostalgia’s sake?

Marionette goes on to say how disappointing the follow-up scent “Millennium” was. I think it’s widely agreed that, while trends from the ‘80s and ‘90s often come back in style, no one is really nostalgic for the early 2000s. This feed into my The Last Jedi hypothesis: Johns is aware that with a “legacy sequel,” it’s important to innovate certain story elements while replicating others present in the original.

After all, for all of the boldness of throwing the characters of Watchmen in with DC’s stable of heroes, Doomsday Clock is mirroring a lot of story beats from its predecessor. Barring Superman waking up from a nightmare at the end of last issue, Doomsday Clock 2 is the first introduction to the goings-on of the DCU in this series.

Instead of Watchmen’s “The End is Near” signs we have numerous protest signs of the anti-Bat variety. This latest anti-superhero sentiment is due to recent revelations of “The Superman Theory,” that contextualizes America’s superheroes as government-funded WMDs. The real reason that most superheroes are from America is simple: the writers, publisher and (majority of) readers are American, but this is a great in-story way to address the over-abundance of superheroes from America. “The superman/God exists and he’s American” was a headline featured in Watchmen announcing the arrival of the super-powered hero Dr. Manhattan — one that Johns is most certainly emulating in Doomsday Clock 2. And like Watchmen, a lot of the meat and potatoes of the public policy and opinion of Doomsday Clock is in its “supplemental” materials — The Superman Theory is detailed in full in news stories from The Bulletin.

The Superman Theory is also explored a bit in Watchmen world just before they hop into the Owl Ship and come over to the DCU. As most of the city runs in terror, Gary Frank draws one man standing out from the crowd to recite part of the old catchphrase from The Adventures of Superman: 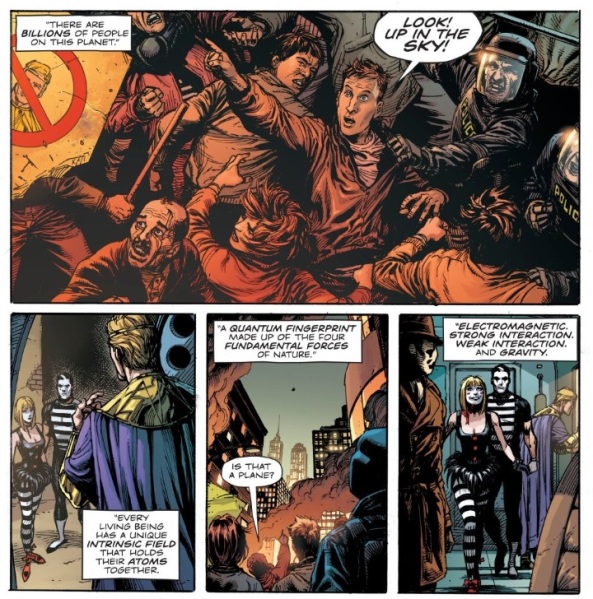 It’s kind of surprising that a Superman optimist such as Geoff Johns would paint such an ominous and contemptuous picture of the archetypal do-gooder as the bringer of annihilation. Personally, I found this imagery ten times more effective than a Superman/evil Superman counterpart. The juxtaposition of the world looking up for a hero to save them and instead being greeted by a nuclear warhead is very Watchmen indeed.

And even though it might have seemed like I poo poo-ed the base level of a Watchmen/DC crossover earlier, it was a delight to see Rorschach in Wayne Manor/The Batcave. 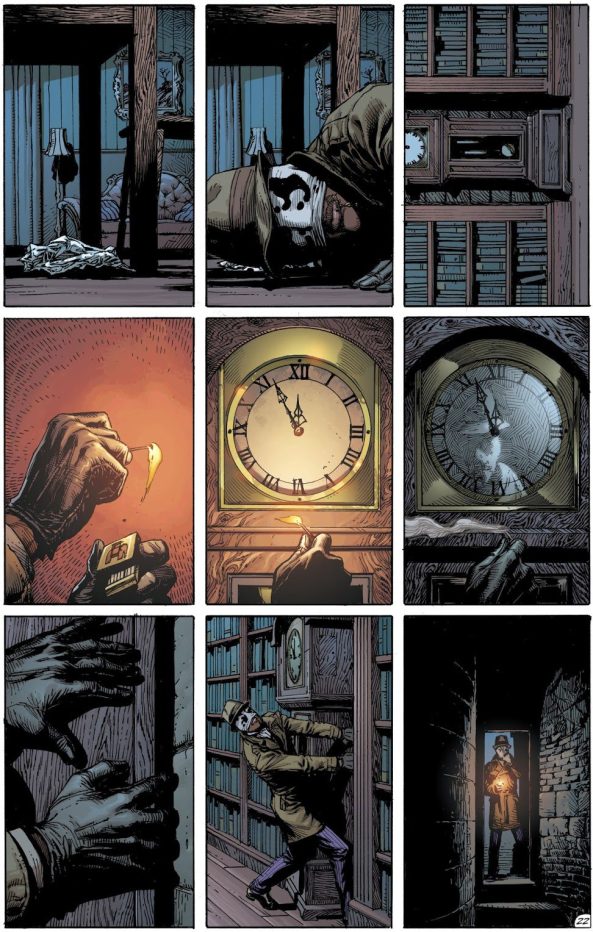 Gary Frank does some great visual storytelling with Rorschach on par with Dave Gibbons’ original Watchmen work.  Without a speech bubble or internal monologue, Frank shows us Rorschach’s detective work in action.

Similarly I think that Rorschach’s reaction to all of Batman’s trophies in the cave was awesome. 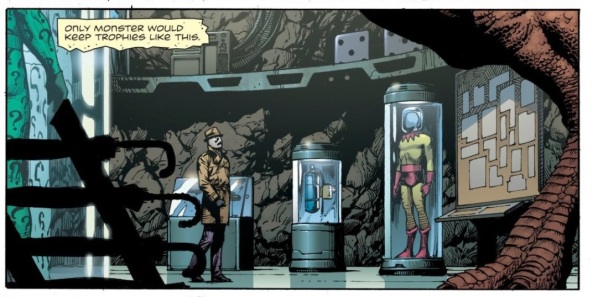 Though Batman has seen his share of evil in his time, Rorschach comes from a world that is as violent and unforgiving (maybe moreso) than our own. Can you blame him for thinking that Batman’s collectibles were trophies commemorating his crimes?

Drew, if you couldn’t tell I am still really digging this series — was Doomsday Clock 2 a dip in quality for you? I’m also still digging The Mime and The Marionette, do you have anything you’d like to comment on their robbery/costumes? One thing I’ll say is that this DCU doesn’t necessarily jibe with the current continuity — it has a different feel to it — do you think that’s intentional or matters at all?

Drew: I’m willing to chalk that up to the style of the creative team and the tone of this series — of course it feels different, but I think we’re meant to understand this as the mainline DC Universe. Those kinds of differences of tone and voice are true of pretty much any crossover, but are particularly pronounced in one that is explicitly paying homage to a series that was conceived in many ways as a critique of the DC Universe.

But I think this works best for me when I’m thinking of this less as a crossover between these universes (or even as a sequel to Watchmen), and more of a way of reconciling the legacies of these two properties. Specifically, the way the more shallow “grim’n’gritty” elements of Watchmen were adopted by the DC Universe in the wake of Watchmen‘s runaway success. The precise narrative for how and why that happened is a bit more complicated than that, but I don’t think “Watchmen made the DC Universe dark for decades” is entirely inaccurate.

Which may be why the DC Universe seems so markedly dark in this issue. The reality of the DC Universe probably is darker on the whole than it was before Watchmen, but some corners of the DC Universe have resisted that more — or recovered from it more rapidly — than others. Indeed, we might understand Rebirth as a kind of rebuke to the lingering effects of Watchmen, returning the DC Universe to a more hopeful, less bleak outlook.

But that it’s “returning” to that hopefulness complicates the nostalgia narrative for me. Is the nostalgia for Watchmen or a time before Watchmen? Is this series critical of one of those nostalgias but not the other? I think it’s too early to say specifically what this series has to say on the issue of nostalgia, but I’m excited that Johns seems committed to the idea of addressing these issues in a series that clearly has a complicated relationship to nostalgia.

I suppose what interested me most in this issue is where Johns and Frank start to break away from the Watchmen style. That style clearly has a profound influence on the look of this series, from the nine-panel grid to Rob Leigh’s hand-drawn(looking) speech balloons, but the strict intercutting that Johns and Frank use for much of the issue insists on a few four-panel rows that feel decidedly alien to the Watchmen universe. 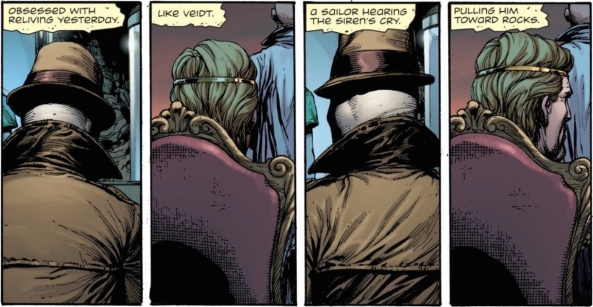 That may feel like a modest example of breaking the Watchmen style — and it would definitely be an overstatement to suggest that this issue’s visual style isn’t largely conceived as a tribute/homage — but it does show that Johns and Frank are willing to break with convention when and where it suits their story. That’s an important distinction for this series moving forward, and one that gives me confidence for how things might pan out. There’s a deep reverence for the source material, to be sure, but it’s not slavish devotion.

Which might just speak to the Carson McCullers quote from which this issue gets its epigraph:

We are torn between nostalgia for the familiar and an urge for the foreign and strange. As often as not, we are homesick most for the places we have never known.

It’s an obscurer reference than we ever got in Watchmen, but I think its specificity more than makes up for its unfamiliarity — this is obviously chosen rather precisely. Which is why I’m reading this quote as a mission statement of sorts for this series. We’re not just torn between the foreign and strange; we’re homesick for something we’ve never seen before. Here’s hoping Doomsday Clock can deliver on that promise.