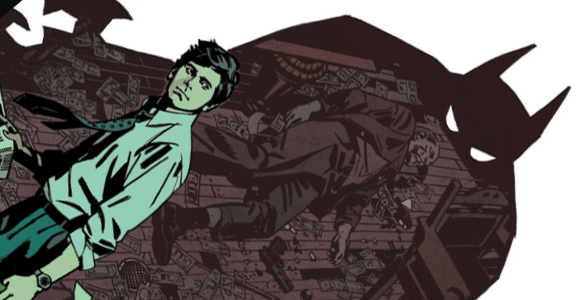 As a force for good in the world, there’s a lot missing in the Batman equation. Or, if not missing, at least contradictory. Batman’s search for justice implies a kind of universal balance, one where all bad behavior is punished and all good behavior rewarded, and because money is never an object for Bruce Wayne, this balance is achieved at no real cost to anyone. Batman Creature of the Night 2 explores the inherent imbalance necessary to create Batman in the first place, illustrating the difference between being safe and being fair.

Bruce’s company’s investments are all doing remarkably well, but y’know, it’s partially because their competitors are beset with various tragedies. Bruce writes these incidents off as fortunate for him and for his investors. Because Bruce is so focused on how he can use the money from the resultant profits to help the victims of street crime, he never pauses to consider the victims of these incidents that end up netting him so much cash. And of course, these aren’t really accidents, but intentional actions undertaken by Bruce’s Batman-esque guardian angel. Part of making Bruce feel “safe” is empowering him with the money to radically reshape the lives of victims. Artist John Paul Leon draws these accidents at a safe distance, allowing us Bruce’s privileged perspective as spectator in these incidents, instead of the perpetrator of them.

Writer Kurt Busiek perfectly illustrates the slippery slope that Bruce is on as he attempts to help a young woman who lost her parents to inexplicable homicide. The girl’s name is Robin, because Bruce still only sees the world in terms of the comics that inspire him. The first step is to set up a fund for her, send Robin to a prestigious boarding school — essentially set her up the same way he was set up. But it doesn’t stop there: Bruce bribes Detective Hoover, first with a hat, then a suit, then a car, gain access to her parent’s case file. Ultimately, Bruce offers Robin a job, essentially sight unseen. Alfred calls this for what it is early in the issue: “privileged.” Whatever sacrifices (voluntary or otherwise) Bruce has made through the course of his life, his wealth and his position in his company are not the natural and inevitable result of a virtuous life led.

Actually, Busiek gives Alfred all of the best lines about what’s wrong with Bruce’s outlook, and by extension, the whole idea of the young rich white straight cis-male white billionaire reshaping the world. “You think you can push the world around and the world won’t push back.” The great failing of the Batman story is that it is based in naiveté. All the power amassed by Batman or Bruce Wayne or Bruce Wainwright comes from somewhere — you don’t make billions without someone else losing billions, and you don’t punch someone in the face without someone getting punched in the face.