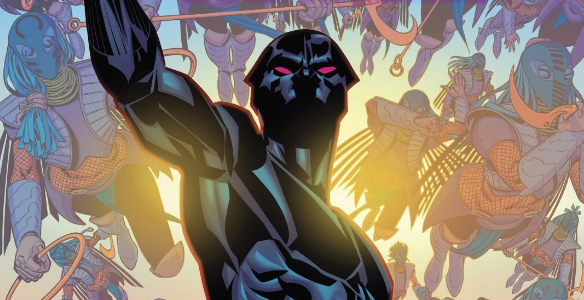 Be a sadist. No matter how sweet and innocent your leading characters, make awful things happen to them — in order that the reader may see what they are made of.

Whether you’re writing an indie comic title or trying to pen the next billion-dollar Star Wars film, a great place to start is by asking, “What is the hardest thing for my characters to do?” True character, after all, is revealed through the most difficult decisions they’re forced to undertake. After a very interesting tangent in Black Panther 166 to meet the new Klaw, writer Ta-Nehisi Coates tries to pile on the challenges facing King T’Challa and the rest of his royal court of protagonists, but is it better to assault a character from all sides, or to offer one clear, powerful opposing force?

This arc began with the inciting incident of gateways opening around Wakanda, with these portals spewing forth the stuff of folklore: spider-creatures, gruesome yeti, and troll monsters. These are all hold-overs from the religions which pre-date Wakanda’s ancient religion and its gods, the Orisha. However, Coates reveals to us that some of these monsters actually came into being through the newfound abilities of the revitalized villain, Ulysses Klaw. Klaw works so well as a villain for this world, embodying the late 19th Century European Imperialism which ravaged so much of Central Africa (10 million estimated dead by Belgians in the Congo, alone), while also asking some very interesting thematic questions. Klaw masques his power move against Wakanda by assuming the role of a god, one extolled by Ras the Exhorter (a name borrowed from the black separatist in Ralph Ellison’s Invisible Man). This ties, beautifully, into the extended questions which Coates continues to explore about the role of lore and cultural heritage in modern Pan-African culture and the contemporary effects of white colonialism on the black psyche. Huge, important questions being explored here, as we can expect from Coates.

So how many sources of antagonism do we have? T’Challa plans for responding to these threats on multiple fronts, because there are so many: Klaw and his cadre of cronies (Faustus, Stane, Hammer, Zenzi), the warring neighboring nation of Azania skirmishing at the border, the Originator gods and their open gates pumping out an army of beasts terrifying the populace. These are the literal baddies against the main character — who one might consider to be T’Challa, though I find the distance between myself as audience and the Black Panther to be vast, so maybe we’ll argue that our protagonist is Wakanda herself. Where I get overwhelmed, though, is with the litany of philosophical opposing forces, particularly with this title’s complicated relationship with democracy.

I can’t tell whether this is the character of Queen-Mother Ramonda, as a member of the “old guard” of Wakanda, lamenting the slow bureaucracy of democracy while being nostalgic for absolutist rule, or Coates as the author actually pointing the audience and book towards supporting a pro-monarcho-capitalist hero, we’ll need to wait and see, but either way, you may see how convoluted of a web is being weaved here.

I suppose my big questions I’m left with as “Klaw Stands Supreme” builds to its inevitable conclusion is: Coates wants to challenge his protagonist(s) as much as possible, sure, but are we at critical mass for the amount of antagonism being included here? Would Klaw as a singular, focused force be more effective? And can Coates tie this all up a bit tidier than the conclusion of “A Nation Under Our Feet”?

One comment on “Focus vs. Multiple Fronts in Black Panther 168”