Thanks to decades of supplemental material, there’s almost nothing that’s gone unexplained in the Star Wars universe — even the most minor, insignificant of characters tend to end up with extensive backstories. This can be fun trivia, but I often find myself rolling my eyes whenever I see another story that exists just to explain something that didn’t really need explaining. At first, Star Wars: Storms of Crait appears to be just that kind of story, but thankfully, it transcends those origins to become something far more entertaining.

Actually, Star Wars: Storms of Crait‘s attempts to give the rebel outpost on the mineral planet Crait (from The Last Jedi, in theaters now!) an origin are easily the issue’s weakest moments, as, outside of the trenches Luke and Wedge build, nothing here really matches up with the movie anyway — the actual base from the movie (with the giant blast door) is never built, and if the planet is practically uninhabitable, with all life poised to die off in a few years, how do the “Crystal Critters” survive there in Last Jedi? Again, though, Storms of Crait exists as much more than simply an origin story, allowing it to be a successful issue despite not fully succeeding in this area.

Storms of Crait‘s greatest accomplishment is simply being funny. Writers Ben Acker and Ben Blacker find the humor in their characters, mining consistent laughs from Luke’s whining or Han’s self-serving attitude, turning their casts’ greatest weaknesses into the issue’s greatest punchlines. This also serves a greater purpose, though. Throughout the issue Acker and Blacker emphasize one of Leia’s greatest strengths being her ability to see the potential in people to be great, and Luke and Han are proof of that. For all their flaws, as evident as they are throughout this issue, they’re still heroes who come through when they’re needed to. The same can’t be said for Trusk Berinato. 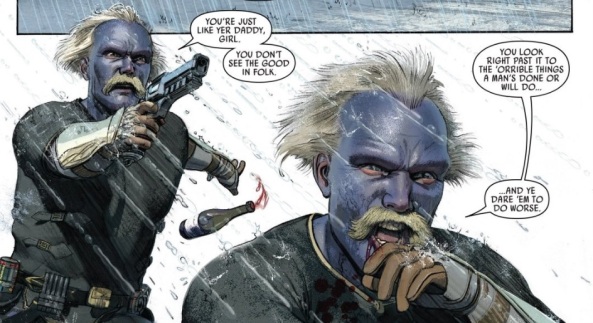 Leia ends up taking a chance on Trusk, a colleague of her father (Bail Organa, not Vader) who has proposed the dead planet Crait as a new base for the Rebels. Leia is an optimist, but not stupid. She gives Trusk a chance to help them because she truly believes that he has the potential to be an ally, but still does her homework and discovers his connections to the Empire (who he ends up selling Leia out to). Trusk takes this as a personal betrayal, as a sign that Leia only sees the worst in people, but Acker and Blacker make sure we know this isn’t true because of Leia’s faith in Luke and Han. Instead, Trusk is the one who can’t see the good in people.

Between this and Mike Mayhew’s atmospheric, action-packed art (I’m still not a fan of photo-realistic faces, but even this works far better in Storms of Crait than it has in the main Star Wars title lately), Storms of Crait ends up far transcending its premise. It’s not just trivia — it’s about something.

One comment on “Star Wars: Storms of Crait 1 Is More Than Just Trivia”