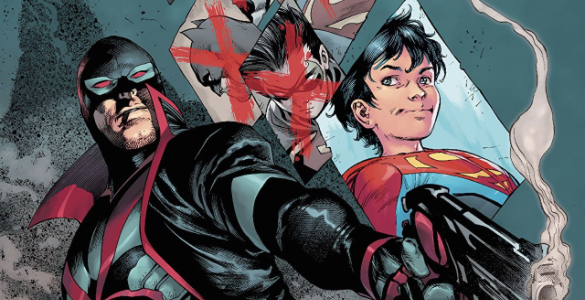 I consider a Peter J. Tomasi and Patrick Gleason credit on a comic book to be a mark of quality, almost a guarantee that the book I’m picking up will deliver a good time. Such a strong track record makes an issue like Superman 38, an issue that pretty much misses every mark across the board, a bit mystifying. How to account for such a discrepancy?

Perhaps it’s that the entire “Super Sons of Tomorrow” crossover event has the distinct flavor of corporate mandate, like an especially sinewy piece of beef that’s difficult to make your way through. Why is this an issue of Superman at all, except to string the events of this crossover across as many books as possible? This feels so much like a Super Sons entry that after reading the first handful of pages, I had to double check and make sure I was reading the right thing. Tomasi and Gleason have not been shy about making Superman a periphery character in his own book during their time on Superman, but it’s usually in service of foregrounding Lois or Jon. Here, everyone gets lost in the noise.

That’s especially true of Tim Drake, aka Savior, aka Easy to Mistake For Midnighter, whose redemptive moment in the final panels of the issue reads as inexplicably unmotivated outside of editorial knowing Drake’s gotta become a good guy again. His turn from antagonist to — ugh — savior happens too quickly to make any sort of impact. One moment, he’s trying to convince Superman to let his son explode, and then, in a single, tiny panel on an otherwise extremely busy page, Tomasi and Gleason try to sell us on Drake being turned by the sight of Clark and Conner Kent flying to help Jon. It’s thin gruel.

There is a brief moment early in the issue with the usual Tomasi and Gleason flair, and, unsurprisingly given how well they understand the characters, it involves Damian and Jon. Damian, obstinate as usual, refuses to let the Teen Titans knock him unconscious so they can ferry him and Jon to safety. But Jon knows it’s the best option they have, and, instead of arguing, does what needs to be done.

It’s the best, most genuine moment in the entire issue.

2 comments on “Feeling the Crossover Blues in Superman 38”