Humans aren’t perfect. We often have dumb ideas or bungle good ones, we make lots of mistakes, and fail far more often than we succeed. But we do try. And what’s particularly endearing is that we often try for the sake of others. This is what Marvel heroes are all about — imperfectly trying to help others — and there’s really no better example of this in the modern Marvel canon than Clint Barton. He’s an ace archer and his heart sure is in the right place, but (bless him), he’s more prone to failure than just about anyone else out there. But he’s also the most qualified person around to help Kate, which means he’s coming to her rescue, whether she needs it or not.

And “not” seems more likely here. We’ve seen Kate get out of similar scrapes in non-team-up scenarios, and she seems to be well on her way to staging an escape by the time Clint blunders in with an unconscious Madame Masque (in her Kate clone body), hoping to pull some kind of switcheroo. It’s an ill-advised plan ripped from an episode of Scooby-Doo, but of course it’s what Clint would come up with. It’s literally the first thing Clint thinks of when he hears that Kate has a doppelgänger running around.

Not that Kate’s friends are much more help. The next time we see them, they’re LARPing that scene from Mission: Impossible, with Clint sneaking through vents and all three of them trying to be the Ving Rhames to his Tom Cruise. 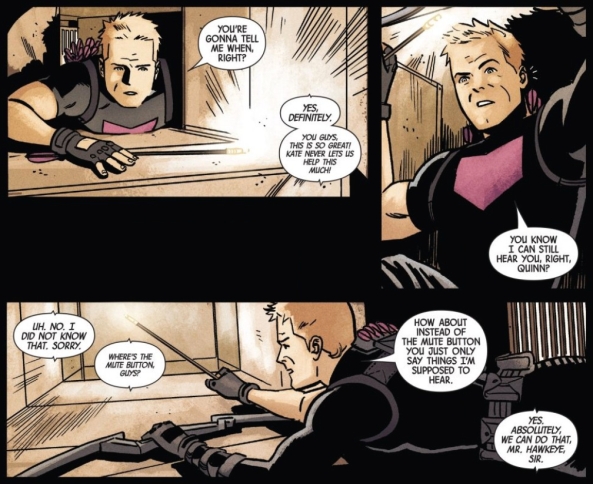 That is, until he reunites with Kate and she can ask what in the hell he’s doing. Turns out, three n00bs might not be the best sounding board for superhero plans.

Kate is immediately able to see the holes in this plan, and her prediction comes true almost immediately. It’s another great gag that not only reunites these two but ups their immediate stakes. Clint didn’t help get Kate out of the hole so much as double the number of people in a hole, but it’s okay: they both know the way out.

One comment on “Hastily-Laid Plans Go Awry in Hawkeye 14”