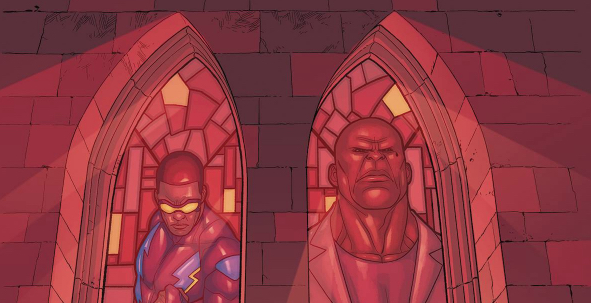 Superheroes have become so ubiquitous, we sometimes take their motivations for granted. Not everyone has a well-known origin story, so we often just accept that a given hero is fighting crime without any further explanation necessary. That may seem odd, but it’s also how most police stories go — we don’t always need an explanation for why the protagonist became a cop in the first place. But it does leave some personal investment on the table. Police stories often get around this by somehow making the case at hand personal, but that personal connection can have a lot more resonance if it reaches back to the character’s past — perhaps the very thing that drove them down this path in the first place. I hadn’t really been sweating Jefferson Pierce’s motivations — he’s a community-minded guy that happens to have superpowers, so I could believe him feeling some sense of duty — but Black Lighting: Cold Dead Hands gets specific, drawing from the real-world shooting of Tamir Rice as a kind of Uncle Ben moment.

Using the death of a real person as a plot point in a comic may seem exploitative, but I think it works here precisely because we’re already familiar with it. Jefferson could have described a fictional shooting with all of the same details, but because we already know the name and story (and have likely seen the videos) of Tamir Rice, we understand Jefferson’s feelings immediately, because they are our own. Understanding Bruce Wayne’s grief is an intellectual exercise for most of us, but we don’t have to imagine what it was like for Jefferson to follow the story of Rice and his shooters because we also did it.

It’s not entirely clear when in Jefferson’s personal crimefighting career the Tamir Rice’s death might have happened — I can’t tell if this is meant to be the thing that inspired him to fight crime — but it’s enough for him to simply be thinking of that story as he rushes to prevent a similar one from playing out.

Once Jefferson intercedes, cooler heads prevail, and the immediate danger of shooting is averted, though Tobias Whale does everything he can to stoke the fear that leads to situations like this one. Indeed, the sharpest political commentary in the issue is that Whale stands to benefit from this climate of fear, selling more weapons which in turn generates more fear in an endless cycle — Whale even sets aside some of his profits to the NRA just to keep those flames fanned more generally. It’s a beat that brings the subtitle of this miniseries into focus, hinting at the shape its final two issues might take.