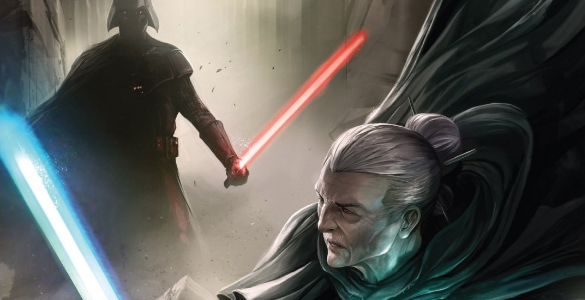 This article contains SPOILERS! If you haven’t read the issue yet, proceed at your own risk!

Spencer: If knowledge is power, than so is wisdom. Both are talked up as some of the greatest traits of the Jedi Order, but so often we think of Jedis as warriors first and foremost, their victories physical ones rather than mental. It’s a mindset Charles Soule and Giuseppe Camuncoli are clearly looking to challenge in Star Wars: Darth Vader 10. Jocasta Nu, Jedi librarian, isn’t much of a warrior (at least in comparison to Darth Vader), but she achieves a vital victory over Vader anyway, simply by using her wits and knowledge. Most importantly, she has the wisdom to recognize that achieving such a victory will require sacrifice, and the will to go through with it nonetheless.

Vader’s mission is to return Jocasta to the Emperor alive, because he wants access to her database of Force-sensitive children across the galaxy. Thanks to her keen instincts and knowledge of the Force, Jocasta is quickly able to pick up on this, and more importantly, on the differences between the Emperor’s objectives and his apprentice’s. 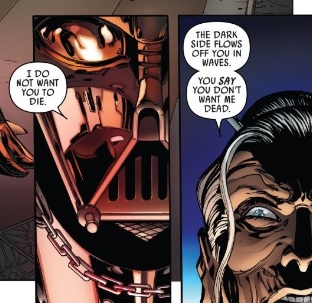 While it takes Jocasta until a little later in the issue to fully assemble that information, she first picks up on it here, when she notes the differences between Vader’s words and his seeming intentions. Vader is almost always conflicted about his missions and at odds with their ultimate objective, but Jocasta is one of the first to truly pick up on that tension and weaponize it against him. 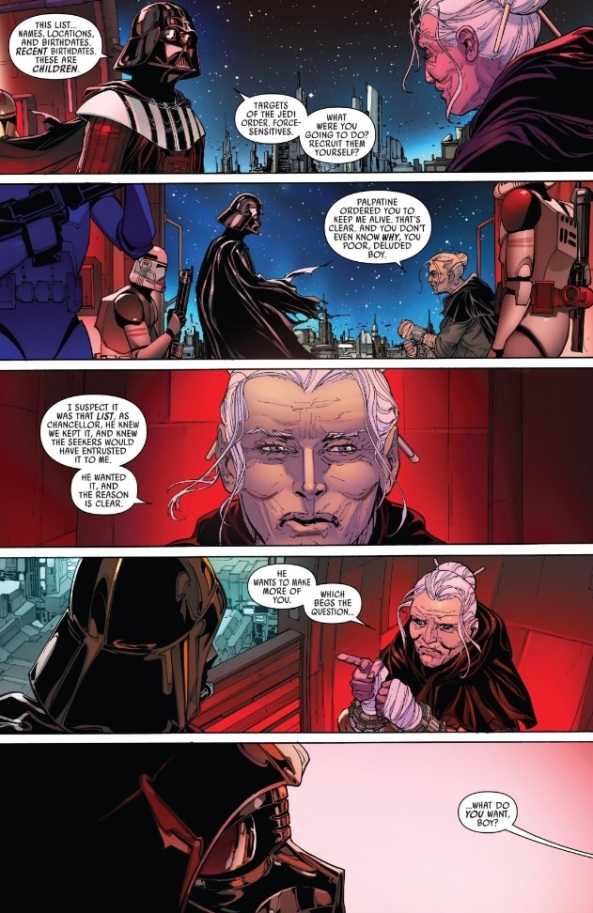 It does seem significant to note that this is more of a last resort for Jocasta, who does attempt to the best of her ability to fight off Vader and his soldiers and eventually escape. When that fails, though, she has the wherewithal to realize she needs to put together a last ditch effort, and the knowledge to make it an effective one. I think Jocasta’s theory here is at least partially right — I imagine Palpatine would probably kill most of these children, but he absolutely would attempt to seduce and recruit any he saw potential in, Vader be damned — but it doesn’t really matter whether she’s actually right or not, because Vader believes her. Tapping into a Sith Lord’s greatest fear is no small feat.

There’s also intelligence and wisdom in the way Jocasta is able to prioritize, and to still achieve her objective even if means drastically changing how she does so. At the beginning of the issue Jocasta is planning to take the list of Force-sensitive children with her, using it to train a new generation of Jedi and ensure that they rise again. Once Vader captures her and takes the list, though, she realizes this method is impossible. That doesn’t mean her goal can’t be achieved, though. 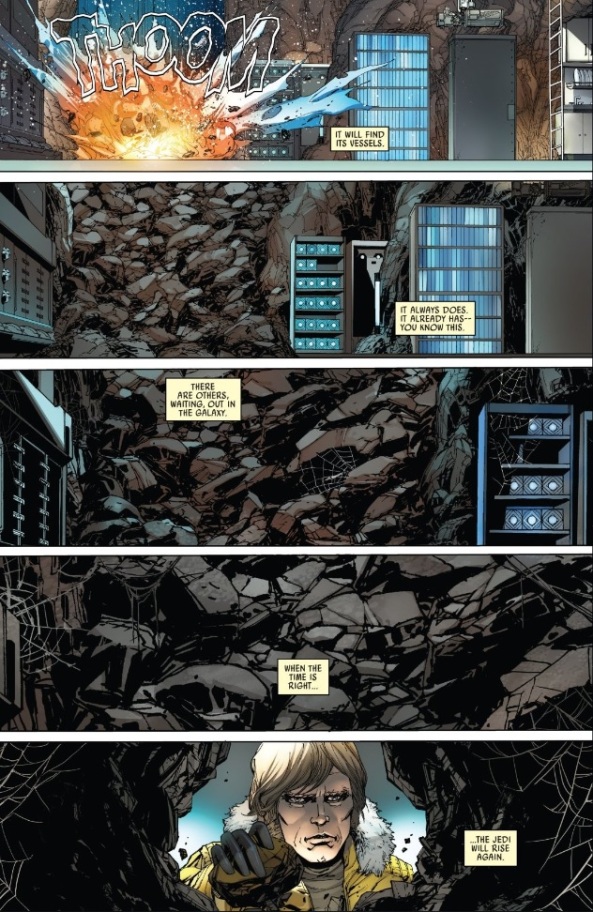 The narration here is an echo, a reprise of the speech Jocasta delivers to Vader at the beginning of the issue. The Force will always seek to find balance, and when Jocasta can no longer help it do so by finding and training young Force-sensitives, she does the next best thing: she manipulates Vader into destroying the list, thus protecting those children and allowing them time to rise on their own, which we can see them eventually do in the form of Luke Skywalker himself. Jocasta’s wisdom and knowledge of the Force allows her to better understand the role she plays, to not get hung up on the details but rather on results — and she’s more than willing to sacrifice herself to get them. Jocasta has valuable perspective that Vader often lacks.

Knowledge plays a vital role thought Darth Vader 10 in a few other ways as well. One is accidental — one of Vader’s Lieutenants neglects to inform the rest of the troops on just who exactly Vader is and what he looks like, causing the troops to mistake him for one of their Jedi targets and fire on him. It’s a beautiful reminder about how important knowledge is — without it, even the strongest can fall to a tiny mistake. Jocasta herself, meanwhile, forges the issue’s most potent weapon out of one simple fact: Darth Vader’s true identity. 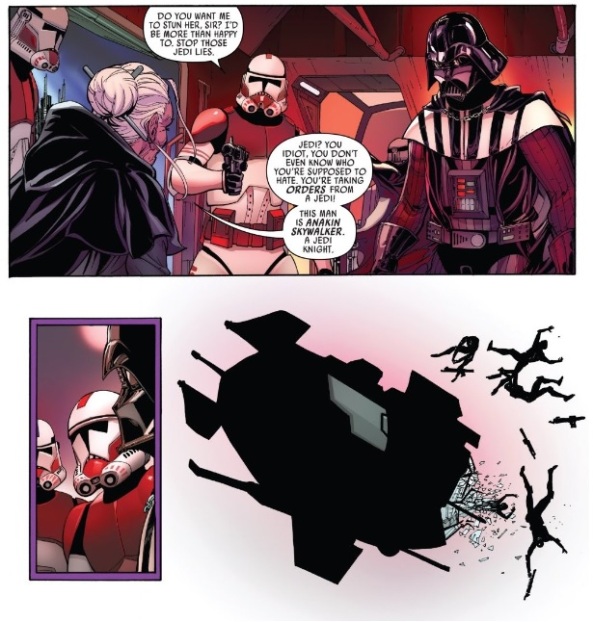 Again, it seems important to point out that Jocasta doesn’t intuit Vader’s identity herself — it’s a simple fact she discovers from the ID system in her Jedi library, but it allows her to learn so much about her enemy, and to ultimately land a mighty blow to him. At first her move here almost seems counter-productive, as the soldiers want to keep her alive while Vader quickly kills her, but again, Jocasta’s goal at this point isn’t to save her own skin, but to protect the kids on her list. Manipulating Vader into killing those soldiers helps her accomplish this goal, as Vader just killed everybody other than himself who knew that they’d recovered the list, allowing him to destroy the list without being ratted out to the Emperor. Jocasta likely didn’t plan every single piece of this plan out to the letter, but I’m still impressed by her resourcefulness and foresight. Maybe she wasn’t much of a fighter, but she was a cunning warrior nonetheless.

Taylor, what’s your take on this one? For an issue where information and manipulation plays such a large role, there’s still quite a bit of action — do you have any thoughts on the fighting, and on how Camuncoli brings it all to life? And I couldn’t help but notice how, even as Darth Vader is the main character of this title, he still plays the role of its somewhat enigmatic antagonist. Are you enjoying this approach?

Taylor: I’ve always thought that a compelling antagonist is better than a compelling protagonist any day, so I’m loving it. The reason I say this is that protagonists usually have to play by a certain set of rules. While they don’t necessarily have to be Luke Skywalker do-gooder types, there is at least a line most protagonists can’t cross if they are still going to be considered on the pro, as oppose to anti, side (and yes, I’m fully aware that a protagonist can be a bad person, but for the sake of a Star Wars story, I think my line of reasoning is justified). Whenever a character is bound to some oath or rule, their actions are limited to a certain degree and that’s just not as exciting as a character, like Vader, who can do whatever the hell he wants because he’s goddamn evil and doesn’t give a fuck about the rules.

This can make it hard to sympathize with an antagonist, though,  given that they may not behave in any way that is relatable. Camuncoli circumvents this pitfall, however, with a series of panels that focus on Vader’s most expressive trait — his eyes. Er, well, his eye googles. Just look at how full of fear they are when he realizes that the lightsaber-gun he and Jocasta are battling over is about to explode. 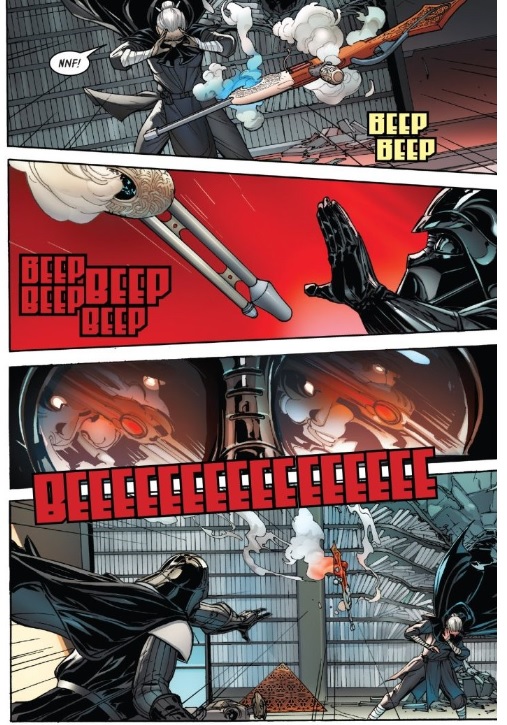 By cutting off the visor of his helmet with the upper boundary of the panel, Camuncoli has managed to make Vader’s goggles look wide-eyed and scared. Fear is an emotion everyone knows in one form or another and seeing Vader scared of something makes it easier to connect with him, even if most of his emotions are hidden behind a mask. Later, Camuncoli once again uses Vader’s eyes to help make him more relatable. 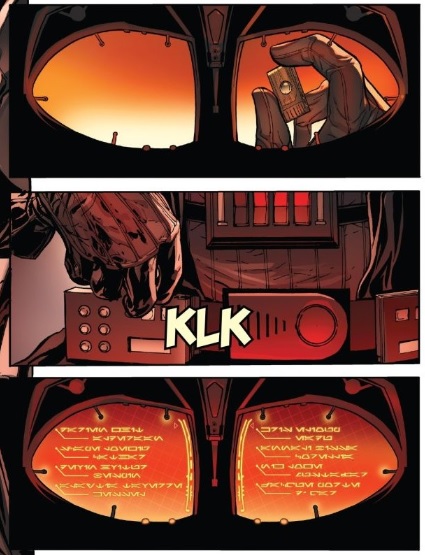 When he captures the data file with all of the young, potential Jedi names on it, he uses a function of his suit to view it immediately. In showing us this, Camuncoli puts the camera behind Vader’s mask so we get a view of what’s like to be in Vader’s shoes. In this way, Camuncoli literally is forcing us to consider what things look like from Vader’s point of view, which once again reinforces the idea that even though he’s evil, Vader is someone who you can empathize with.

Aside from making it easier to understand Vader’s perspective on things, Camnucoli draws some seriously fun action scenes. There’s a lot I could say about these, but what I appreciate most is the way he illustrates a Vader that is just as agile as he is strong. In virtually all portrayals, Vader is shown as being powerful, yes, but also kind of hulking and slow. Connecting this man with the flipping and lightsaber twirling Anakin Skywalker has always been kind of difficult, but Camnucoli bridges that gap here. Take, for example, the way Vader gracefully dodges all of Jocasta’s lightsaber-gun blasts.

There’s a certain beauty to be found in the way he appears to effortlessly glide out of harms way in the first and third panels shown above. This isn’t a Vader that is slow but powerful, but a Vader that is fast, deadly, and accurate — much like he was in his past life. This version of Vader also makes sense when you think about the time period this comic is set. This series takes place when Vader is just coming into his powers and forming the awesome and intimidating reputation that made his name feared across the galaxy. In short, he’s younger here than he is in A New Hope or even in the Vader series that proceeded this one. And lest you think this is just a matter of perspective in the panels above, look at the gazelle-like prance Vader makes to jump from the Jedi Library to an Imperial drop ship.

This panel of picture-perfect leaping is followed by Vader murdering a stormtrooper a panel later, which strikes a perfect balance in showing both the beauty and beastly nature of a young and virile Vader. As this illustrates, Vader and Anakin once used to be more closely connected. While that knowledge helps Jocasta win a moral victory at the end of this issue, it also is the reason Vader, a more powerful Jedi, was able to defeat her.