by Ryan Mogge and Patrick Ehlers

Ryan M: You can’t always get what you want. It’s a tough lesson, and one my parents tried to impart by singing Rolling Stones off-key to my brother and I throughout childhood. In relationships, defining and declaring wants is only the first step — you need agreement. Archie 27 picks up right where the last issue left off, with Betty and Archie being asked to make a romantic choice by Dilton and Veronica, respectively. Dilton and Veronica have defined their wants, but the power lies with Betty and Archie.

Archie offers commentary that he hates choosing, but the reader can suss out a solution here. If Archie took place in a simple world where everyone got their heart’s desire, the issue could end with a Dilton/Betty and Veronica/Archie double date to the Spring Dance, while Jughead eats a stack of hamburgers. Instead, Mark Waid and Audrey Mok are able to offer a satisfying conclusion to a story that was, at times, goofy fun without supplying a “happy ending” for anyone.

Waid acknowledges this in the final pages by cribbing from perhaps cinema’s most famous unhappy/happy ending.

We see Dilton and Archie walk away from Betty’s house, but there may as well be fog coming in on the tarmac. If the Casablanca reference weren’t clear enough from Mok’s art, Archie quotes Bogart’s classic line. This moment is ostensibly the final page of the arc, as the rest is epilogue and preview. Casablanca is a romance that ends with characters being more true to themselves than their genre. The same can be said about Archie and crew in this story. This issue eschews the gags and bits that have come to be expected from the series in order to give these characters authentic moments. When Veronica sobs to her mother that it feels weird not to be selfish, it’s not a joke. It’s a true moment for this character.

There are a few times where the issue seems to nod to the series’ usual propensity for gags. For example, I thought we were going somewhere silly with Moose and those water bottles.

Instead, its a chance for emotion and exploring the dynamics of the Moose-Dilton friendship. Mok has Moose’s look of intimidation perfectly rendered, even as the menace is undercut by it being an expression of Moose’s desire for affirmation from his geeky buddy.

That said, there were a few times where Waid really wants to turn the knife in our poor hearts, particularly when Betty appears in the doorway to say “Wanna dance?” to Dilton, who is there to ask her to a dance, before declining his romantic advances and sending him home with his crutch invention. Is Betty right that Dilton’s feelings are a function of his desire to fix things? Part of what I appreciate about the way this story is written is that I don’t know, and it doesn’t matter. We’ve seen enough of both of these characters and their dynamic to believe that it’s true for her.

Waid starts the issue following up on the ultimatums, presented at the height of drama and emotion and allows the rest of the story to exist in a more grounded world without the soap opera hysterics. For that reason, I am not excited about the new storyline introduced in the final page of the issue.

It’s good to see that Reggie was released from jail, but the transition from Archie, who will “go a million miles out of the way not to hurt anybody”, to Reggie’s vindictive desire to expose classmates for the clicks gives me whiplash. Maybe this will be a story that starts in the land of the nighttime soap before settling into something based in grounded story, but right now I am so pleased with this issue and very wary about the future.

Patrick, what did you think? Was the issue’s resolution of the romantic subplots satisfying for you? How about Jughead’s role as trusted advisor? Also, you agree that Waid was being mean with that “wanna dance” thing, right?

Patrick: It didn’t read as mean to me. Poor Betty still can’t even stand up straight, as evidenced by her crooked stance in the NOW INFAMOUS “Wanna dance?” panel. Literally the next thing she says is “whuf” as she crumples to the ground, unable to support her own weight. I think it’s interesting that we don’t totally get to see Betty as any kind of real perspective-character until the moment that she forces the resolution of both of these romantic stories. Waid and Mok set up a fairly obvious two-men-on-parallel-grief-journeys tableau early in the issue by presenting Archie and Dilton coming down from the “choose” moment on alternating panels on the page. I absolutely adore the way it starts with them both hunched and moping their way through the world. 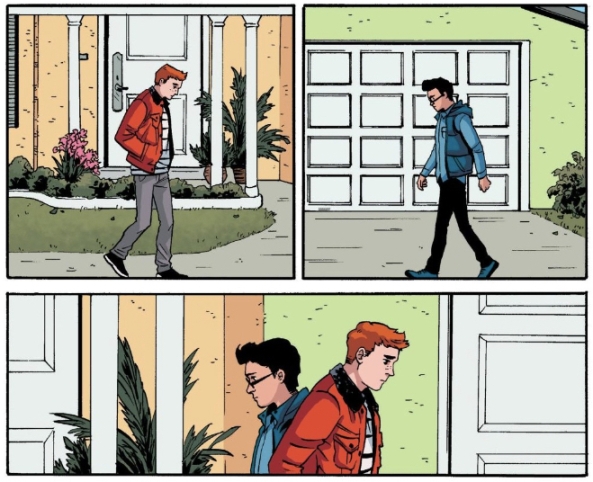 Of course, both of these characters are heading into different ways of dealing with their problems. Arch, ever the inactive player, is going to press on as he always does — by being sad and sweet and not wanting to hurt anyone. Ol’ Dilton, on the other hand, is throwing emotional caution to the wind and is going to take action to win Betty’s affections. Neither one of these courses of action is particularly mature, but y’know, we’re talking about the Riverdale kids, so some of that is to be expected. The fact that Arch and Dil actually cross paths makes their different approaches to this situation all the more obvious and explicit. I love love love the idea that the houses they’re walking in front of in the first two panels are literally right next door to each other (as we can see in the third panel).

And Dilton’s not the only one that’s on a parallel path with Archie – poor Veronica’s suffering through this thing too. Ryan already mentioned how Ronnie’s sadness is being played for pathos, rather than as the butt of some joke-on-the-rich-girl, but it’s also worth pointing out how she gets to share the page space with Archie the same way Dilton does. Wok splits the page again, but this time doesn’t let the characters’ paths cross – Arch stays on the right, Ronnie stays on the left.

And check out how letterer Jack Morelli keeps Archie’s text message balloons on his side of the page. Hell, we don’t even see Veronica’s phone in her panels — suggesting that Archie’s just texting into the void. They really are both sad and alone, and experiencing some genuinely upsetting teenage heartache.

But that brings me back to Betty. We don’t really see Bets dealing with any of this until she swats down two consecutive suitors. By withholding her perspective until the very end of the issue, Waid and Mok are illustrating how Betty is being treated like a solution to the story’s problem rather than an actor within the story, complete with problems of her own. She says as much to Dilton: “You’re a fixer, and I don’t need fixing.” She’s not a waypoint on Dilton’s mini-map representing the successful completion of a side-quest, just as she’s not the correct solution to Archie’s “Choose” question.

So, I guess that puts me in the same boat as you Ryan: after treating all of these sad sacks as fully formed human beings with contradictory, subtle wants, it does feel pretty abrupt to shift to Reggie exposing the Blossom twins as whateverwhateverwhatever. I almost felt like I was switching from the Archie comics to the Riverdale TV show — even the dramatic shadows of the prologue evoke the campy noire aesthetic of the television series. I should have faith in this creative team not to chase the success of the TV show, but in the weeks between now and the release of issue 28, I guess I’m going to have that faith tested.