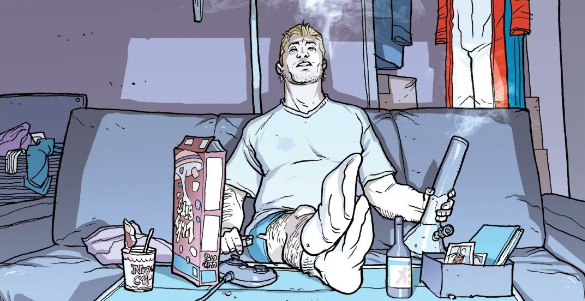 Where are we gonna go, now that our twenties are over?

I turned 30 last year, and it was both as overwhelming and as underwhelming as I’d been led to expect. It was underwhelming in the sense that I didn’t (and still don’t) suddenly feel any different, but also overwhelming in the sense that it’s a major life milestone, a pretty decisive end to my youth. You’re “supposed” to have your life together by 30, to have some sort of direction, but so many of us (especially now in the Millennial generation) don’t. I often feel just as aimless as I did at 18, only with the added bonus of feeling like my opportunities to find that direction have all but vanished. I’m not necessarily full of regret, but I still can’t help but to sometimes look back at my youth with nostalgia for all the possibilities I once had, and I’m rather certain I’m not alone in that regard. Nick Wilson, the titular star of Eddie Gorodetsky, Marc Andreyko, and Stephen Sadowski’s The Further Adventures of Nick Wilson, certainly knows how I feel. Sure, he once had all the direction in the world, but now he’s as aimless as the rest of us.

The creative team makes that fact abundantly clear throughout the entirety of this premiere issue, showing us a “normal” day for Nick Wilson consisting of short party gig, lunch with an old friend, and plenty of weed. It’s a far cry from his days as the world’s greatest (and only) superhero, but those days ended when Nick lost his superpowers and was (quite literally) brought down to Earth. Nick’s age is never actually stated in the issue, but his dilemma is certainly played up as age-based — Nick’s fears about this sexual prowess may be due to the loss of his superpowers, but they’re probably familiar to a lot of men getting up there in years. And Nick’s own post-powers ennui is compared and contrasted to the age-based concerns (or age-based lifestyle changes) of the party-mom and Nick’s old high school-ex, Jane Jenkins.

Jane seems to be handling things with a lot more grace than Nick, but in a way her problems are pretty similar to Nick’s — the life she once had is over, and she finds herself starting over at an age where that’s awfully hard to do.

There’s almost an ironic ring to this series’ title, with Nick’s “Further Adventures” thus far being anything but adventures. I’m curious to see whether the rest of this series is going to find Nick learning to appreciate a different kind of adventure than the one he was used to as a superhero, learning to appreciate that change in perspective age brings, or if he’s going to find new adventures of a whole different sort (as the B-Plot with Xavier and his father seems to be hinting at). Either way, I hope it helps Nick find some direction. Getting old (or losing our powers, or losing whatever identity used to define us) isn’t the end of the world, no matter how it may feel at times.