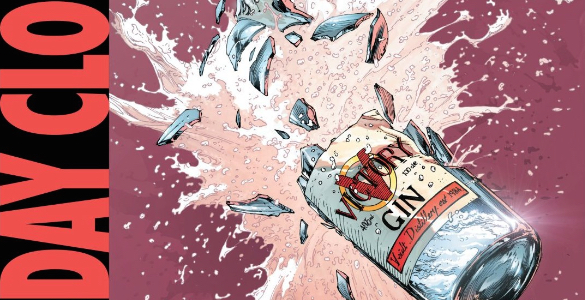 Spencer: What’s the most controversial element of the original Watchmen? For my money, it’s the pirate comics. I understand and appreciate the in-universe reasons for choosing pirates, and I understand their function in reflecting the themes of the story in a sort of parallel narrative, but I’ll admit that, while many readers consider them sacred, I’ve skipped them in all my subsequent Watchmen rereads. To me, those segments have always felt tantamount to the supplemental material in the back of each issue, something extra and non-essential, important more as an intellectual exercise than as an interesting narrative, or an interesting part of the overall Watchmen narrative, in their own right. Issue three of Geoff Johns and Gary Frank’s Doomsday Clock introduces this semi-sequel’s own version of the pirate comics: the noir movie. I have similar issues with these segments as well.

Similar issues, but thankfully, not identical. Unlike the pirate comics, I’m actually invested in The Adjournment‘s murder mystery, and in its behind-the-scenes murder mystery as well. The supplemental material also draws explicit connections between the film — or, at least, the Hollywood era that birthed it — and some major DC players, including Rita Farr (The Doom Patrol’s Elasti-Girl), Sgt. Rock and Easy Company, Ted Grant (The JSA’s Wildcat), and Libby Lawrence (The All-Star Squadron’s Liberty Belle). In fact, readers are first introduced to the film when it starts playing at former JSA member Johnny Thunder’s nursing home. All this connects the movie to the world around Doomsday Clock in a way I don’t necessarily think the pirate comics ever were.

Of course, as of now these DC connections are meaningless; in fact, Johnny Thunder mostly seems to appear as an excuse to introduce The Adjournment, not the other way around. Instead, Johns seems to be using the movie in the same way Alan Moore used the pirate comic: narration from the movie is used to segue between one scene and another, and events and themes from the film resonate with the rest of the issue’s story — the best example is the comparison Johns draws between the loss of Nathaniel Dusk’s family and Johnny Thunder’s family breaking their promise to visit him. The plot of the movie involves two men murdered while playing chess, and apparently the twist is that one of the victims was a murderer himself. Could this be a reference to the tussle between Comedian and Ozymandias that opened the issue, or perhaps foreshadowing of future events?

Ultimately, though, I feel the same way about The Adjournment as I do about the pirate comics — they’re interesting intellectual exercises, but I don’t know if they help me get anything extra out of the narrative. This seems especially egregious in Doomsday Clock 3, an issue where the movie takes up quite a bit of space, but ultimately, not that much happens. Thankfully, what happens in this issue seems far less important than how it happens. Marionette and Mime’s excursion could be summed up in a sentence or cut to less than a page, but it would rob us of some gorgeously rendered Gary Frank fight scenes. Likewise, The Comedian/Ozymandias match-up revels in the minute details of the fight.

I can imagine many artists fitting this exchange into a single panel, using speed lines, blur effects, and afterimages to convey Adrian’s speed. Frank, though, wants us to be aware of each and every shot, of every beat of the battle. It slows the pace of the narrative down, turning quick encounters into immersive experiences. Later in the issue Frank and Johns use this trick to a different effect, putting the reader in Rorschach’s shoes as time slows to a crawl around him.

This time we aren’t meant to be relishing every hit, but to be frustrated like Rorschach, to be feeling every excruciating second of Batman’s read pass as if they were an hour. It’s tremendous use of layouts to control the pace, tone, and feeling of the story.

Rorschach’s plot this month brings me both my favorite moment of the issue, and my least. Favorites first: I love what little we get to see of this new Rorschach’s origin.

Tying him directly into Ozymandias’ attack on New York makes his relationship with Veidt much more complex, but it’s also a much more compelling reason to revisit Watchmen at all. I didn’t need a story that conclusively resolved Watchmen‘s open ending, but a story recounting the fallout of Veidt’s attack on one individual person feels much more worthwhile to me; it’s a chance to deepen the original story without betraying it, which I appreciate.

I’m much more sour, though, on Batman’s locking Ozymandias up in Arkham. It’s a great twist, but I feel like Johns came up with the twist first and strained to make the story reach that point. Why would Batman lock a man who knows his secret identity and spent the night in his house up in Arkham? That’s reckless! Shouldn’t he be much more curious about someone who just showed up in the Batcave in the first place? It feels like Batman’s making dumb choices just to reach a preconceived plot point, which isn’t great storytelling.

Michael, for an issue where not much happened, there’s still so much I couldn’t cover. What’s your take on the Comedian/Ozymandias fight, or on Comedian’s survival at all? How does that even work? How do you feel about Mime and his imaginary/invisible guns? And what’s your read on The Adjournment and its role in Doomsday Clock? Do you think we’ll even see it again, or will it be a one-issue idea rather than a running segment?

Michael: Spencer I’m with you on everything you just said — you’re right on the money my friend. Like Spencer, I painfully read through The Tales of the Black Freighter and was frustrated at its lack of payoff/synchronicity with the main Watchmen story. I am optimistic that The Adjournment and the mystery surrounding Nathaniel Dusk’s death will tie-in better with Doomsday Clock, for the reasons mentioned above. However the introduction of the vague plot elements of The Adjournment and Johnny Thunder coupled with Batman’s bullheaded decisions at issue’s end make Doomsday Clock 3 the weakest chapter thus far. Once the series is completed, a little bit of hindsight bias could change that however.

Batman is often portrayed as the master strategist, the chess player that is ten steps ahead of his opponent. But despite his genius-level intellect and expert detective skills, writers often portray him as stubborn and skeptical, unwilling to accept evidence that he doesn’t believe or understand. Scott Snyder has done this a few times in his run with the character and Geoff Johns does it again in Doomsday Clock 3.

As Spencer mentioned, the logic of Batman locking up some crazy dude who knows his secret identity in Arkham Asylum — the one place where you’re sure to find hundreds of people who want to kill or crush Batman — is bananas. I get as frustrated with this frequent version of Batman as I did with Jack on LOST. You have this man of science and logic who believes he has the whole world figured out, but when he stumbles upon something that doesn’t jibe with that notion he freaks the fuck out. In the context of the whacky multiverse of the DCU, is Walter Kovacs’ journal really all that out there? Would Batman simply deny this possibility, get rid of Rorschach and not investigate further? I don’t believe so, and I am sure we will see a change of heart in Batman — hopefully sooner than later.

Let’s focus on “The Comedian Conundrum,” shall we? The world of Doomsday Clock 1 takes the events of Watchmen as gospel — everything that happened in that book set up the hellscape world on the brink of Armageddon that Adrian & pals narrowly escaped. So it stands to reason that Edward Blake — The Comedian — still fell to his death and was buried. Without that inciting incident, there is no rest of the Watchmen story as we know it.

And yet Gary Frank shows us an alternate resolution to Blake’s perilous plummet. Doctor Manhattan appears to have saved Blake, transporting him to another world and dropping him in the Gotham harbor. So which is it? Did Blake still meet his inevitable end, causing the chain of events that led us here to still occur? Did he alter the history of the Watchmen universe? Or neither? My money’s on neither.

Alan Moore and Dave Gibbons crafted Manhattan as a character whose godly powers removed him from the bounds of normal human society. His ability to see the events of time and space simultaneously instead of linearly made him value human life less — or at least value it differently. With that in mind I’d say that as far as Doctor Manhattan is concerned, there is no “change” to Blake’s fate. Manhattan has momentarily plucked The Comedian out of his original narrative for reasons unknown — but I believe that after he’s done with him, Blake will still end up street pizza. There is no time travel or time stream change because for Manhattan it is all happening at the same time.

Doomsday Clock continues to stand out from its predecessor for the sheer inclusion of The Mime and The Marionette, who continue to wickedly delight. These characters fit so well into the Watchmen world, and I commend Johns and Frank for their slow burn reveal of The Mime’s weapons. For two issues we’ve laughed at, but been unsure of just what The Mime was capable of. Does he have powers that allow him to mime guns and conjure bullets? Is it just a psychological game? It turns out that our boy is in fact packing heat — real invisible guns. 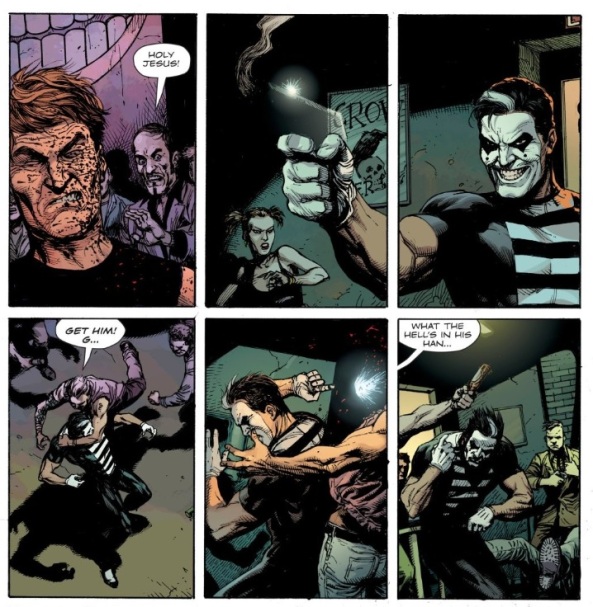 The conceit of Watchmen was that in a world of masked heroes Doctor Manhattan was the only one who had actual superpowers, which this seems to hold up. I wouldn’t be surprised if the invisible weapons are somehow tied to Manhattan’s powers. Waiting to reveal those invisible weapons until Marionette and Mime arrive in Gotham was also a nice touch. Like their Dark Knight Detective of Science, Gotham City operates on “real world” threats. This makes the reveal of The Mime’s guns even more striking and theatric — putting on a show for the local yokels as it were.

I’m still 100% onboard for this series, but this issue did leave me a little disappointed. That’s not that really that surprising for a third issue, however. In the first two issues Johns and Frank introduced us to the world of Doomsday Clock and then pulled the rug out from underneath us. Now we are in the thick of it, with clues and trails that we don’t really know what to do with yet. But unlike Batman, I’m not choosing to ignore them and walk away. Bat-burn!