As readers, we’re all duly familiar with the narrative modes — third person omniscient, first person, objective observer, etc — we’re taught them from an early age, and are aware of them in basically all narrative writing. We’re far less aware of the narrative modes in visual storytelling, and lack the kind of common nomenclature to identify them that we have for literary narrative modes. But there’s no doubt that they profoundly influence our perceptions of visual media — there’s a profound difference between a camera shooting from over a character’s shoulder to one that is meant to literally represent their point of view, and we can feel that difference, even if we don’t have precise language to describe it. It allows visual storytelling to be much more visceral and subtle than prose, as we’re not necessarily consciously aware of its effects. With The Wild Storm 11, Warren Ellis and Jon Davis-Hunt exploit this feature of visual narrative for all its worth, keeping us at a distance from any of the events of the issue.

It’s an effect that’s perhaps only truly understood in the context of the series as a whole, which often gives us rather explicit POV shots, showing characters’ arms at the bottom of the panel, as if they’re our own. This issue provides no such visual cues, so while a few shots might arguably be from a character’s point of view, there’s nothing that draws our attention to it. Instead, we get a lot of two-shots and over-the-shoulder compositions, keeping us constantly aware of how our characters are positioned relative to one another. It’s a clever way of keeping us on the outside of an issue that is ultimately about characters spying on (and potentially misunderstanding) one another. 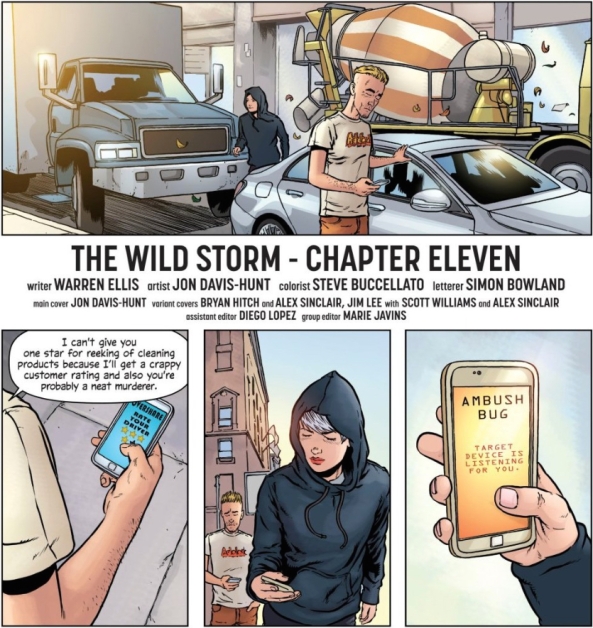 We might actually understand the second and fourth panels as Lucy’s POV, but for me, the key moments are in panels one and three, which introduce the jogger in the black hoodie and reveal her to be Lucy, respectively. It’s a twist that couldn’t really be pulled off in prose — there’d be no way to introduce a seemingly unimportant background character without explicitly mentioning them — but it’s also one that positions us as a kind of impartial observer of these events. We’re neither Lucy nor Mitch, but a third person who understands their relationship (even if Mitch doesn’t), and watches these events unfold from an objective distance.

That distance becomes increasingly important, as the various factions’ attempts to infiltrate and understand one another are slowly and imperfectly forming. We see that Bendix is spoiling for revenge and I.O. is doing everything they can to get leverage over him before that, and that our Wild CAT is caught in the middle, as I.O. doesn’t exactly understand what their role is in all of this. That I call them “our” Wild CAT may speak to some favoritism, but one of the benefits of the narrative distance is that I’m kind of rooting for everyone. I feel for poor Mitch getting hacked (in spite of Jackie’s warnings about rideshare apps) and for Miles’ domestic life. Heck, I even relate Bendix’s thirst for blood, no matter how unpalatably he may come off. That means I’m fully invested when things finally do boil over — it’s all the more thrilling because I don’t want anybody to lose.