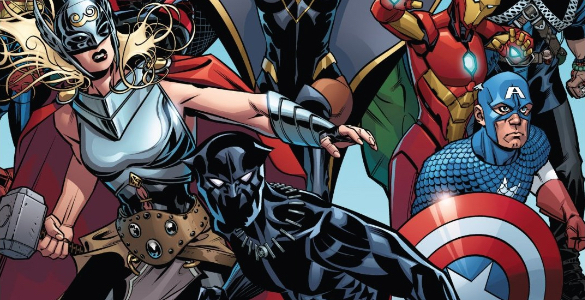 All comics are silent comics. This is an immutable fact due to their very nature as a static, visual medium. This makes it all the more impressive that artists can imbue a page with a bevvy of techniques which trick our beautiful brains into not only interpreting some onamonpaeatic words as sound, but even suggest the sound’s quality in a way that we, as readers, hardly notice as we go. Black Panther 169 takes away the sense of perceived sound and employs a level of visual storytelling which this title had not yet utilized, making for a gripping read, one focused on two characters, in opposition, in a high-stakes sprint to their objectives.

Artist Leonard Kirk draws fifteen of the eighteen pages of story in silence due to a simple but effective plot mechanic: the sound-based antagonist Klaw uses his sonic abilities to such a degree to bring back his long-lost sister and transmute her neural profile into captured Midnight Angel Ayo’s body that all  of the diagetic sound in the base is canceled out. This leads to Ayo’s lover and former Dora Milaje, Aneka, to jump her guards to free her partner.

This heavy reliance on visual storytelling is a departure from this series’ established style, and Kirk pulls it off with aplomb. One of the first things he does to sell these silent scenes is intruduce the idea that, due to the intense power requirements of Klaw’s experiment, the lights flicker on and off. With this conceit, Kirk establishes a rhythm to the action: 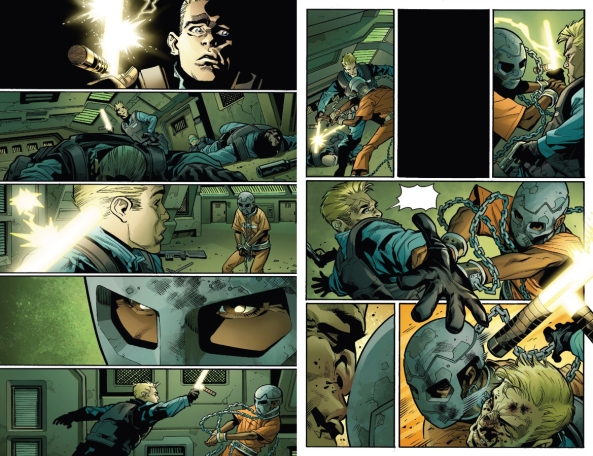 Kirk’s page composition works hard to sell this concept, too. The page on the left sells the moments by giving us long, horizontal panels bleeding to the edge of the page stacked on top of others of the same — lending a stacatto beat without feeling rushed. Comparatively, the right page returns to more traditional panel gutters, with the panels becoming cramped, variable, kinetic, and much faster to read as Aneka’s ambush turns into the claustrophobic fury of one vs. one hand-to-hand combat. The different beats in her various fight scenes all capitulate with some beautiful, thematic moments when this black African woman literally uses the chains of her oppression against her white captors. Sometimes visuals can say just as much about a motif as any character’s sermon.

Writer Ta-Nahisi Coates also set this issue up to succeed brilliantly and simply. Klaw needs this experiment to work and Aneka needs to disrupt the process to rescure her lover. Both of these objectives are oppositional, effective, and immediate, dialing the stakes high and allowing this issue to be both concentrated and efficient. It also surprised me how complicated this made my emotional repsonse to the villain’s plot. Though his methods are dastardly, at the end of the day, Klaw just wants his sister back. It’s a savvy move to build some understanding between the reader and the antagonist without going so far as to build sympathy for the (white) devil.

One comment on “Silence is Golden in Black Panther 169”