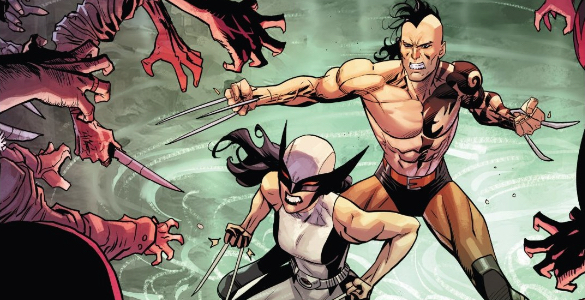 Michael: Tom Taylor continues to write one of the best Wolverine books that is actually pretty un-Wolverine-ish. Wolveriney? Wolverinian? What I mean to say is that for a character who is best known for being a bloodthirsty stab machine, this Wolverine is almost the opposite. To be clear, Logan was/is much more than a barbaric beast. But in Laura Kinney, Tom Taylor has crafted a Wolverine who is wise, humble and (mostly) peaceful. Like Logan, Laura is full of guilt over the violent life that she was born into. But in All-New Wolverine 30, Laura takes that guilt and transforms it into repentance.

All-New Wolverine 30 marks the end of the book’s “Orphans of X” arc, in which the loved ones of victims of the Weapon X enact revenge upon the “Wolverines.” For a premise such as that — which likely contains a bodycount of thousands — the conclusion of “Orphans of X” has a total of zero deaths.

After resuscitating her fellow Wolverines — Old Man Logan, Sabertooth, Lady Deathstrike and Daken — Laura makes a plan of non-lethal attack. After advising Sabertooth and Deathstrike to leave (for some reason) and having the rest of the fam hide, Wolverine faces the Orphans of X alone.

She dons her new Murumasa armor only to shed it two pages later. There’s a lot of powerful imagery from Taylor and Juan Cabal in the next several pages. The first of which comes from Taylor’s script, where it gets a little hokey, but in the best way:

The Muramasa armor is literally crafted from the souls of her family, which makes her sentiment even more potent. Hokiness approved!

With the same sentiment, Laura’s “Jesus walk” is a well-choreographed piece of performance art from start to finish. She armors up to take the brunt of the deadly Muramasa gunfire from the Orphans of X before stripping it off completely, leaving her vulnerable to Henry Sutter’s gunfire. Laura Good Will Huntings her way to the hearts of the Orphans of X and it’s fantastic. How many revenge stories have we seen where the vengeance seeker fails only because they’re the villain? Taylor shows that the Orphans deserve as much forgiveness and justice as the wolverines do.

Instead of continuing the cycle of vengeance Laura decides to join with the Orphans because realistically their goals are the same. It’s a brilliant bit of unity that subverts the norm: the hero says “ya know what? You’re absolutely right. Let’s fix this together.” This of course is punctuated by Cabal’s most powerful image of the issue:

After being shot by poisoned bullets and on the brink of death, Wolverine still has the time to pull a mask over her face to complete her performance and really sell her message.

Tom Taylor is excellent at fleshing our supporting characters, I’d love to see him on a team book — Injustice notwithstanding. Apart from their pre-established best friendship, this issue makes it clear that Gabby is the perfect Deadpool analogue. Gabby — or Honey Badger — calls attention to the more absurd elements of her family’s adventures without overdoing it. In case we missed Daken’s plan from last issue catches us up to speed while calling it out for being ridiculous and gross.

She also uses Captain America as a verb.

Taylor’s approach to Wolverine’s son Daken is very interesting to me. From what I’ve read of Daken, he’s been this father-hating antihero who will kill or fuck anything that’s in his way. In the “Orphans of X” arc, however, Daken has been a more likeable character in the company of his sisters. Though technically since Laura is Logan’s female clone, wouldn’t she be Daken’s…mom-dad? Nevertheless I like that having family warms Daken up a bit. Daken plays big brother to Gabby and Laura in different ways. Gabby is the little sister that admires Daken because he’s a rebel without a cause who tries to keep her at arm’s length. However, Laura is the selfless sister who gives everything for her siblings and asks for nothing in return. Which is why it’s a lot more touching that Daken goes out of his way to ensure that Laura gets to bury her mother — or at least a clone of her mother. I eagerly await what Daken’s future holds in particular, and hope that he makes more appearances in All-New Wolverine.

Patrick what do you SNIKT? There are plenty of excellent Juan Cabal visuals from this issue that I didn’t comment on — what in particular stood out for you? I didn’t really touch on the Henry Sutter of it all, which might not be the most vital plot point of all time, but certainly had an emotional effect. Any thoughts on that? Do you think the “Orphans of X” conclusion leads us to a soft reboot for All-New Wolverine? Are we witnessing the birth of “Wolverine: Weapon X Hunters”?

Patrick: “Hunters” is terminology I would hope they steer away from. I was also really moved by Laura’s pacifist stand against Sutter and the Orphans of X, and it would be sort of a shame to have that same violence redirected back toward the people responsible for Weapon X in the first place. Laura says that she’s going to “see they face punishment for what they’ve done,” which to me suggests hiring a bunch of good lawyers and private investigators. Perhaps that’s “hunting” in the broadest sense of the word, but y’know, when you’ve got three Wolverines and a Honey Badger, the hunt is bound to get more violent than that.

And the non-violence here is so fucking important. Michael, you sorta half-posed the question of why Laura sent Lady Deathstrike and Sabertooth away before enacting her plan, and it’s sorta evident, right? Those two weren’t ready to make the peaceful choice. Nor should we ever expect them to. Cycles of violence are hard enough for regular people to break, let alone straight-up villains like LDS and ST, who have had their murderous rage reinforced and rewarded their whole lives. Laura, Daken, Gabby and Logan are making the extraordinary choice. It is admirable, and it is heroic, but it is by no measure natural that they make it.

DeLaney, you asked me about Cabal’s artwork, but you’ve done a pretty nice job of pulling some of his most compelling images in your half of the piece (including some choice Daken beef-cake). I wanted to focus a little bit on colorist Nolan Woodward’s use of red in this issue. Red is a loaded color, suggesting anger, passion and blood all at once, and Woodward is careful to withhold it from us for the first half of the issue. In fact, the first eight pages of the issue lean so heavily into cool blue color palettes that even the reds of of Gabby’s goggles or Laura’s eyes read as brown. 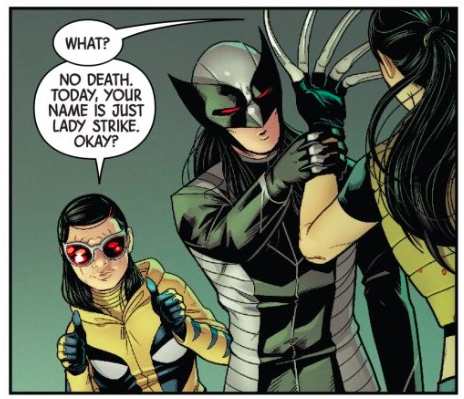 Which isn’t to say that there’s no red. There’s the old hunk of Daken-flesh slumped onto an operating table, or a singular spurt of blood as our heroes crack dude’s heads together. But it’s all very measured and understated until Laura flashes back to the night she spared Henry Sutter. The background of the panel that sets her on this flashback is bathed in red, with the name “Sutter” repeated over and over again, as though Word Perfect crashed in her HUD. Within the context of the flashback, the red is from the fire, but it comes to represent Laura breaking free of her programming. If the cool blues represent Wolverine at her most bad-ass, then red represents her at her most vulnerable and empathetic. Check out the Murumasa armor: it’s all blue, save the eyes, and removing it is what leads to Laura’s bright red blood on the floor.

Cabal is usually pretty literal with his backgrounds, but once Laura sheds the armor, all of that literalism is thrown out in favor of the emotional reality of Woodward’s colors. When Sutter pulls his mask off, the walls disappear, replaced by scarlet light.

Cabal and Woodward call this back too pages later, melding the memory of the night Laura spared Henry with the present.

The rest of this story plays out with Laura bleeding profusely, acting as a kind of human-offering. It is the ultimate act of vulnerability to turn violence — that which used to be her greatest strength — into empathy. That’s what the red comes to represent. That’s a startling subversion of how one would expect the color to be used. But check out all of those high-angle panels of Laura standing in a graphic pool of her own blood and tell me that it doesn’t represent strength by way of understanding.