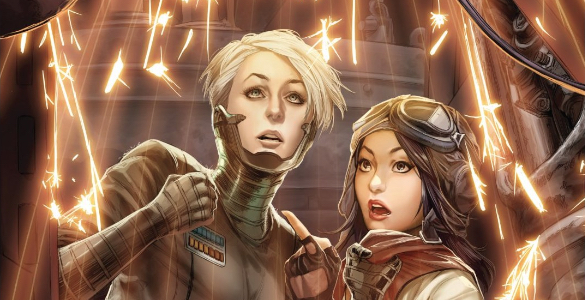 In the past few years, big mega-franchises (Marvel, Harry Potter, Star Wars, etc) have struggled with finding ways to include LGBTQA characters into their stories. Weak attempts at feigning inclusion usually boil down to cryptic hints (“The universe is so big, of course there are gay characters out there somewhere!”) or meaningless lip service (aka JK Rowling insisting Dumbledore is gay, but declining to include any evidence in the text, including in the the yet-to-be-released-but-already-tired Fantastic Beasts sequel film due later this year).

There have been nods to Chelli Lona Aphra’s queerness in previous issues of Doctor Aphra, but in Kieron Gillen, Si Spurrier, and Emilio Laiso’s Doctor Aphra 16 she’s actually allowed to kiss Magna Tolvan, and Laiso’s art is appropriately celebratory.

That a chaste kiss is enough cause to break out the Prosecco speaks volumes about the lengths that these fan-beloved franchises still have to go when it comes to representing queer people, but progress is progress, and even small steps forward are cause for celebration.