By Taylor Anderson and Drew Baumgartner 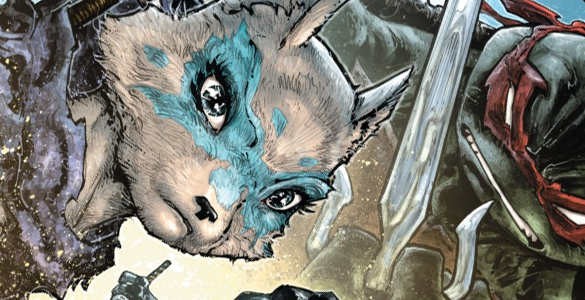 Taylor: After all the numerous battles the Teenage Mutant Ninja Turtles have been through, it’s become easy to forget one fourth of their namesake. No, it’s not that they’re teenagers — Raphael’s temper and Michelangelo’s lightheartedness remind us of that every issue. The part of their name that’s easy to forget, rather, is the “ninja.” Even though each turtle knows ninjitsu and uses shurikens, they frequently eschew one of the fundamental traits of being ninja — stealth — and this makes them more akin to warriors than ninja. So what happens when they’re called out on not being the thing they were trained to become since birth?

Alopex and Raphael are on a stakeout of Null Industries to see why the mysterious company keeps stealing animals from pet shops and has an electric barrier to keep intruders out. Unsurprisingly, a stakeout isn’t Raphael’s idea of how they should be handling the situation. He sees barging into the compound first and asking questions later as the best means of action. Luckily, he eventually gets his wish when Zodi, the scorpion mutant, arrives on the scene with a fresh load of stolen animals. However, just as Raph is about to confront her with open aggression, Alopex stops him with an astute observation. 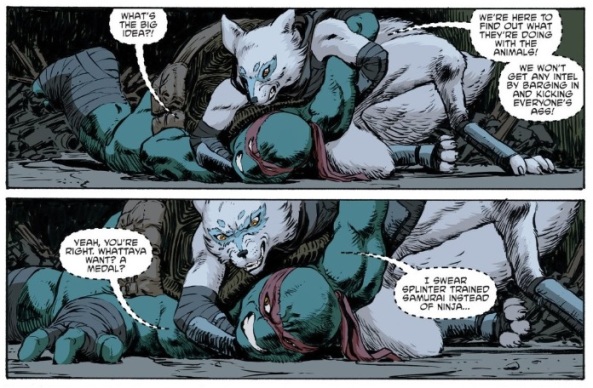 Raph is acting like a samurai here and not a ninja. As in a lot of issues, Raphael, just like his brothers, is eager to get into the action and eschew the whole “espionage” part of the ninja definition. This is a clever and snarky observation from writer Ian Flynn that pokes fun at the turtles’ inability to do their job correctly and which also happens to set the issue up for its most exciting parts.

Since Raph has to resort to stealth mode, this sets up an exciting situation wherein he and Alopex can’t be seen for fear of losing out on precious intel. These scenes of covert action are the best in the issue, and it makes me wish that we saw more like them in TMNT. One of my favorite sequences happens when the shadowy duo first infiltrate the Null compound by using some good, ol’ fashioned ninja smoke. 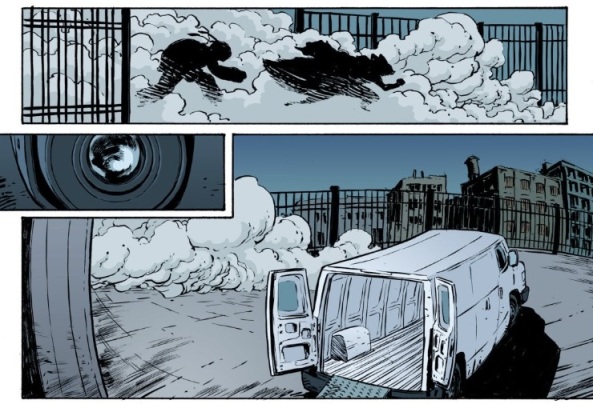 The action isn’t all that dynamic, but what makes these panels so good is the way artist David Wachter organizes these panels. First, he uses an establishing shot of Raph and Alopex sneaking into the courtyard under the cover of smoke. He then uses a small insert shot to show that this courtyard is being monitered by security cameras. He then cuts back to the courtyard only this time we see it from the point of view of the camera with our heroes fully camouflaged by their artificial fog. This sequence does a great job of creating tension by using that cut to the camera and makes Alopex’s advice that she and Raph actually act like ninja seem all the smarter.

The suspense caused by the need for Alopex and Raph to stay hidden is what drives the early action of this issue. Anyone who has played an Assassin’s Creed or Far Cry game knows just how delicious the tension can be when your protagonist has to accomplish a mission undetected, and the same is true in this issue. Just look at how much fun this page is. 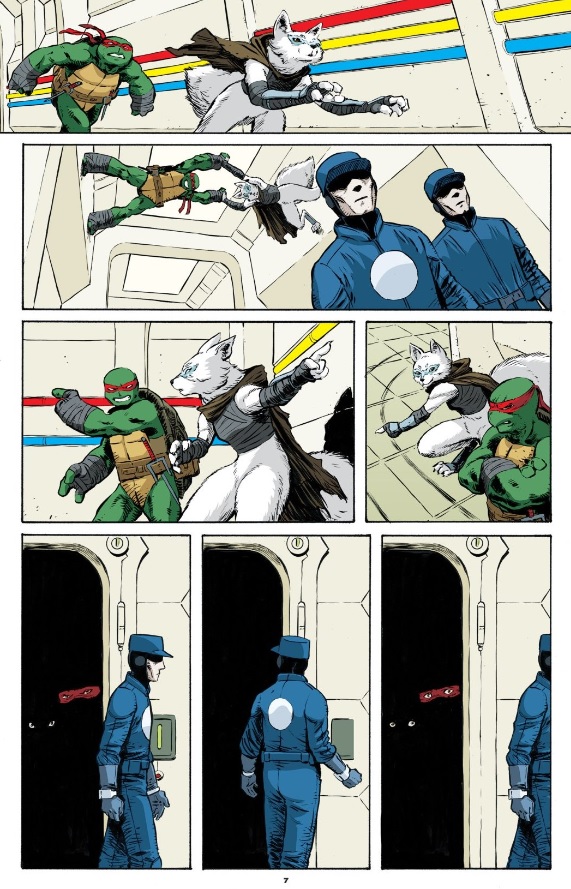 There’s the first close call when our heroes dodge detection by hiding on the ceiling to evade some guards. That in and of itself is fun, but for my money the last three panels, where Alopex and Raph are hiding in the shadows is the absolute best. Wachter again expertly depicts this. In the  first of these three panels we see Alopex and Raph’s eyes, but then in the second they disappear as a guard turns around and peers directly at them in the darkness. The anxiety in this one panel alone is fantastic, as it’s so easy to imagine the guard flipping on a lightswitch or poking his hand into the darkness to uncover the pair of ninja.  However, he moves on and Wachter gifts us with a panel showing the relieved eyes of Raph and Alopex once more.

This is just a great sequence and easily the best part of the issue in my opinion. Drew, I’m curious if you felt the same way. I think the rest of the issue is actually really fun and I particularly like Zodi’s biting dialogue. Do you have anything to say about that, or other parts of the issue? Oh, and what about the “Kingdom of Rats” prelude? Pretty weird right?

Drew: Man, an open conflict with the Rat King has been on the horizon for what feels like years now, so the thought of it actually happening has me super pumped. It’s clear that Bobby Curnow has big plans for that character, so even a little tease like this is more than enough to pique my interest. And at four pages, I hesitate to call it more than a tease, though artist Pablo Tunica turns in a distinctive take on the character design, accentuating both his rat- and corpse-like characteristics.

I mean, I was definitely going to read TMNT 81, anyway, but now I’ve filed it away as something special to look forward to.

As for the feature of this issue, Taylor, I might quibble a bit with your characterization of how IDW has handled the ninja elements of the Turtles generally (I’ve often been impressed at the stealth and patience of these Turtles’ ninja-ing), but your point about how well those elements are handled here is well taken. That infiltration sequence is really fun — I love the way Wachter uses a subtle fisheye effect to communicate that we’re getting that camera’s perspective — and I agree that Flynn’s choice to lampshade the non-ninja choices is a smart one.

Actually, let’s talk about that a bit. Raph is impulsive and quick to anger, so it makes sense that he might struggle with the more disciplined elements of ninja craft. That is: he’s the smart choice for bringing these questions to the fore, as his attitude often seems at odds with being a ninja. Raph grappling with that dissonance is a great story element, but what puts it over the top for me is the fact that it’s Alopex that is calling it out. Her discipline is the yin to Raph’s impulsive yang, allowing Flynn to personify the conflict that’s at the heart of who Raph is as a character. Moreover, that Alopex is clear-headed enough to deliver that message builds upon her ongoing story — particularly Teenage Mutant Ninja Turtles 66 (one of our favorites from last year).

Indeed, Flynn builds upon that enlightened characterization further when Alopex gets the drop on Zodi. 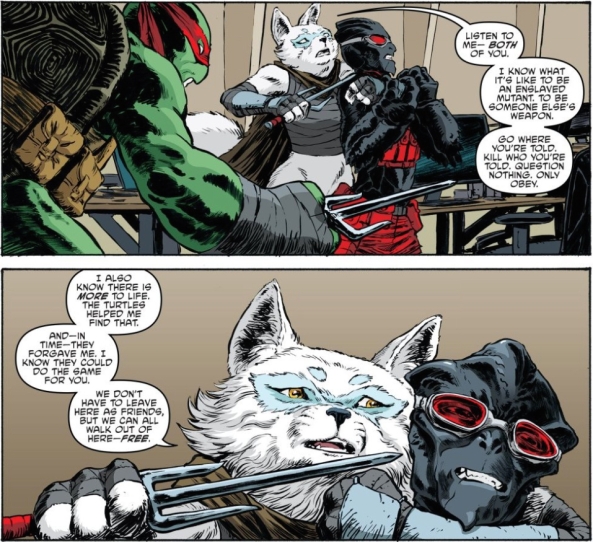 It’s a great moment that speaks to exactly who this character is and what she values. That makes it all the more heartbreaking when Zodi rejects and mocks the offer. Actually, heartbreaking might be putting it too mildly — it seems, however temporarily, to have broken Alopex’s worldview. Look how quickly she slips back into her old rage-filled self after Zodi’s goading.

Maybe that’s what’s the most heartbreaking of all — Alopex is coming off of a long, arduous journey towards inner peace, but it only takes a few comments from an obnoxious troll like Zodi to undo all of that progress. And Flynn really does nail the trollishness of Zodi’s character, writing her like one of those heartless pedants you might accidentally find yourself arguing with on Facebook. It’s a strong characterization in an issue full of strong characterizations.

As ever, I’m thrilled with the state of IDW’s TMNT universe — not just what’s on the page, but what’s behind it. We’ve seen Curnow, Wachter, and Tunica do amazing things with these characters before, but now we can add Flynn to that list. This issue demonstrates his command of these characters and their voices. At the very least, that means I’m excited to meet this snake character in next month’s TMNTU, but here’s hoping Flynn sticks around a lot longer than that.