Michael: Tim Seeley’s Green Lanterns has the DC logo on the cover, but it feels like a very Marvel series, particularly The Amazing Spider-Man. In the heyday of the Stan Lee/Steve Ditko era, ASM had socially relevant messages, long-running narratives, and, of course, the down-on-his-luck protagonist. The modern Amazing Spider-Man tales try that same type of storytelling with an occasional social media flair — to varying success. With ties to prior issues and the constant personal problems of our heroes, and a superhero dating app, Green Lanterns 40 fits right in with that ASM mold.

After their recent adventures in the stars, Simon Baz and Jessica Cruz are happy to be back on Earth doing simple, uncomplicated heroing. After partaking in some hurricane damage control, the Lanterns find themselves in the middle of a missing (super)persons case.

Nightpilot — a superhero that Baz dated for a little bit — has gone missing, and The Bulleteer asks Baz to help track her down. Baz and Jess enlist Cyborg and the Justice League satellite to shed some light on Nightpilot’s whereabouts, only to find that many more heroes have disappeared in similar circumstances. It probably takes a little too long for them to connect the dots between missing superheroes who all happened to be using the same “Caper” dating app, but what are ya gonna do? Our superheroes can’t always be as smart as us readers.

We’re a few steps ahead of our Lanterns on this case, seeing these Caper kidnappings are all a means to an end: super labor. It’s interesting that the direct result of using a dating app is slavery. I’ve been watching a lot of Black Mirror lately so that’s kind of where my head is at — is this Tim Seeley’s critique of our online dating/phone obsession? It might be a bit of a stretch to say that Green Lanterns 40 is about humans being slaves to their devices, but it’s in there somewhat.

I like the idea of Caper if for no other reason than it introduces us to a wide array of lower-tier heroes. They may have sillier names and costumes but since they’re not established mainstays, there’s more of a risk involved — they could very well drop dead. That’s what I like about Green Lanterns, really: there’s very little history to work with/around. Seeley gets to play in the storied universe of DC’s sandbox but with characters whose histories haven’t really been told yet.

That being said, Green Lanterns 40 hints at something which I think could derail all the progress this series has made so far: work romance. 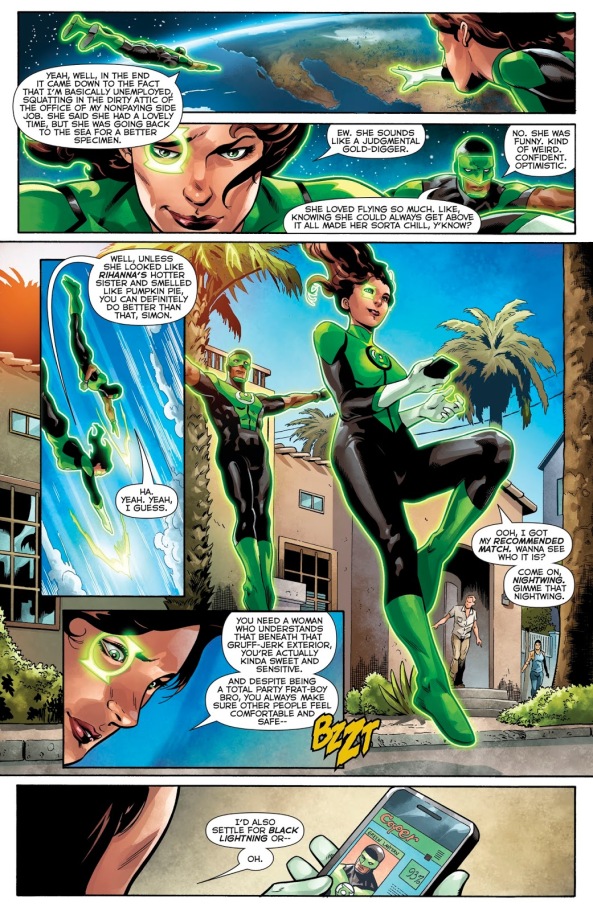 Jessica signs up for Caper and shells out the extra $9.99 to find her perfect match. To her surprise, her partner Simon Baz is a 93% match — a fact that she keeps to herself. Jess and Baz really work together — their friendship has been believable with both Seeley and Sam Humphries behind the wheel. I think turning their partnership into a romance is all kinds of cliche that would most definitely qualify as a “jumping the shark” moment.

It’s possible that this isn’t an indication of a future relationship but of normal human sexuality. Maybe it’s just a brief consideration of one friend as a potential lover. If this has been a love story in the making however, let’s be honest with ourselves: Jim and Pam’s romance stopped being interesting when they actually started dating.

Another thing that I didn’t love is Baz going all high school bully on the Hoocups staff — the garage tech people. “I’ll be back for you nerds!” Maybe Baz is laying on the tough guy act pretty thick, or maybe he’s just irked that the nerds were right:

At least one of the scenarios that she described has happened to Baz and Jess in the past 40 issues. They’ve got your number Baz!

Mark, what’s your take on this Caper caper? Are you a Baz/Jess shipper? Do you like the inclusion of these lower tier characters? Finally, I shall leave you with a brief description of the villain Bulleteer mentions early on: Snowflame, a Colombian villain who gains super strength, super speed and pyrokinesis when he snorts cocaine.

Mark: Green Lanterns 40 is Tim Seeley at his best, and so much of my enjoyment of the issue comes down to the relatability of each and every hero. The Bulleteer is a superhero, yes, but she’s also just a woman worried about the well-being of her friend. Baz is a protector of the universe, sure, but he’s also mildly terrified when he recounts his date with Night Pilot and the stress of simply having to wait for internet to be installed in a new apartment.

(Maybe not intentionally, but I think it’s funny that when Jessica holds up her phone to show the Caper app to Baz and Cyborg it’s on the login screen, even though she was logged into her account and perusing matches just seconds before. Did she quickly log out of her account before showing her screen to Baz and Cyborg out of fear that she might expose some embarrassing personal detail to them? This issue is spookily relatable, if so.)

It’s also cool to see the opening of Green Lanterns 35, the aftermath of Baz’s date with Night Pilot, come back and pay off here in a surprisingly meaningful way. It’s this sort of attention to detail that made Seeley and Tom King’s run on Grayson so memorable, and it’s very gratifying to see it play out here.

I’m in total agreement that the idea of Baz and Jess becoming romantically entangled is, on its face, unappealing. I laughed at Caper scientifically determining that Jess’s perfect match is Baz, because that’s a funny joke and, to my mind, they’re not really right for each other at all. They’re partners and best friends. They need each other, but they don’t need each other, you know?

Still, I spent a lot of time praising this issue for its relatable moments, and I know lots of people who’ve been friends with someone and flirted with the idea of becoming more. I’m not excited by the idea of Jessica and Baz becoming an item, but it could be fun to watch them try.