Not only is it cliche to say that setting of a story becomes its own character, it’s also inaccurate. I don’t care how much you think New York City is a character in [whatever movie you’re talking about], characters have wants, desires, arcs — characters can change and be changed by the story. A location cannot. A good setting can be incredibly additive, coloring in emotional information and setting an appropriate tone, but, y’know — isn’t a character. In Black Bolt 10, writer Saladin Ahmed and artist Christian Ward use the ancient Inhuman city of Orollan, nestled away in Greenland, to emphasize the cold lonely journey Black Bolt has been on since issue 1.

Blinky has been kidnapped by Lash, so Black Bolt and Titania head to Orollan to rescue her. Black Bolt has taken the action of the series to a lot of weirdly sterile environments: space stations and space ships, void of any sort of weather or cultural history. The ruins of Orollan provide an eerie backdrop for this rescue mission, both literally, as the crumbling buildings crowd the background of the page, and metaphorically, as Black Bolt considers how his legacy of failure lead him to this point. I find it fascinating how Ward allows the environment of Orollan to blanket the entire page, sometimes allowing snowflakes to violate the panel borders, and sometimes letting a snow drift act as a transition between actions. 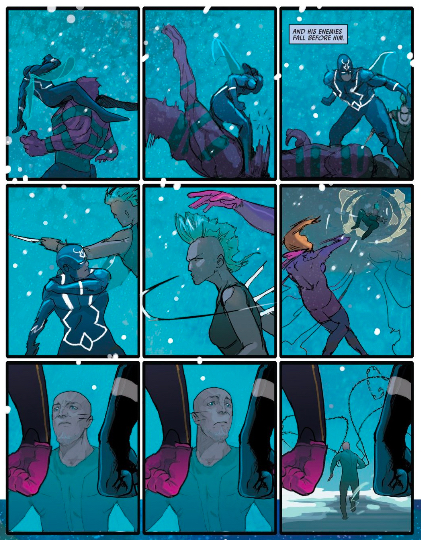 There’s an awful lot going on in this issue, including Black Bolt’s half of the scene we originally saw in Inhumans: Judgement Day 1, and some of pages are over-stuffed with incident. So it’s cool to see just how much of the setting can be established by totally passive, wordless means. When Lash does finally start describing his plan 10 pages into the issue, we already have a feel for the dead world he’s ruling over. Titania makes fun of this part of Lash’s monologue, but it’s true: Black Bolt and Lash aren’t really so different. They both motivated by these stark backgrounds of loss and desolation. Bolt’s heroism comes from his ability to choose life, love and fellowship over destruction.