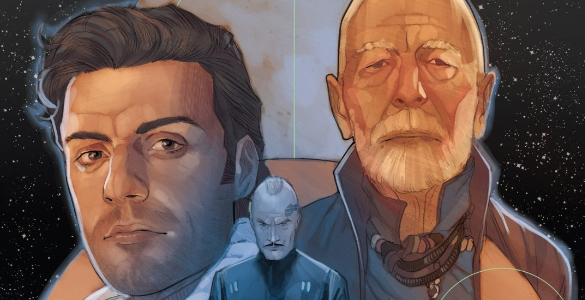 Taylor: Star Wars fans of a certain age remember a time when new Star Wars movies weren’t something to be expected like the changing of the seasons. For these fans, the original trilogy was sacred canon, spawning innumerable subtexts which, because there were no movies to look forward to, were anticipated greatly. In particular, the X-Wing series stands out as being a fun permutation of the early Star Wars novels because it supplied fans with the flair of space battles and the familiarity of well-loved, if obscure, characters like Wedge Antilles. More than anything, though, these novels were fun because they were a journey into the unknown where anything could happen. That’s not the case with Poe Dameron, since we all know how the comic ends. The limitations this places on the series is apparent, and no more so than in issue 24.

Given that I’m talking about where this series ends, it makes sense to start my discussion of this issue at its conclusion. The plot of this installment follows Poe and his team’s mission to save Lor San Tekka from the evil clutches of Terex, who is threatening to sell the coveted man to the First Order. This doesn’t happen after Terex manipulates his way out of the situation, but Lor San Tekka does end up floating abandoned in space, running short of oxygen. 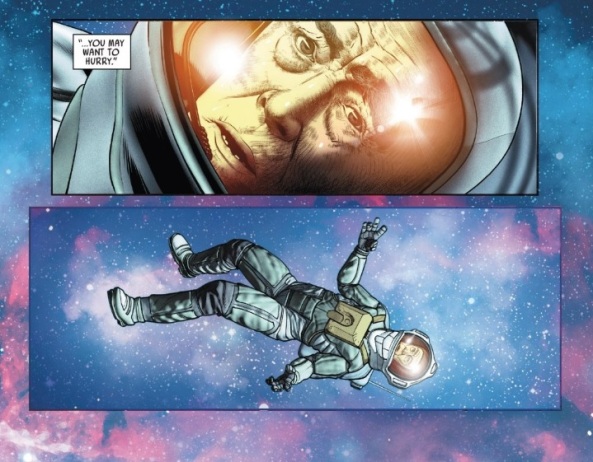 That this is the conclusion of the issue is disappointing. Lor San Tekka is alive and well at the beginning of The Force Awakens so it’s clear that he doesn’t die a sad, lonely, and oxygen-starved death in space. This means there is absolutely no drama or suspense surrounding the “climatic” ending to the issue. It makes the issue have all the sad trappings of a story that is simply going through the steps of being told as opposed to one that is new and fresh. It would be one thing if this is the only way the issue underwhelms, but sadly that feeling is pervasive throughout.

This is apparent in scenes where writer Charles Soule  familiarizes his audience with the ancillary characters in Black Squadron. Within the flight group their has been a simmering romance between Snap and Karē, and as they wait for a signal telling them where Telex is, they decide to talk about having a talk about them. 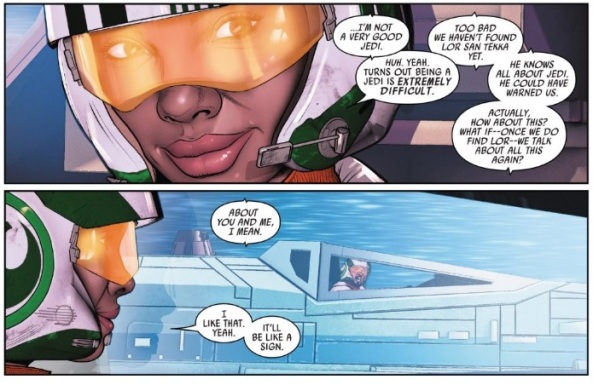 There’s nothing so affronting about this scene and in many ways I appreciate how it sounds like a natural conversation you might have with someone you care about to fill in an awkward silence. This scene, of itself, isn’t the problem. What is, is that it’s hard to care one iota about these two characters. Once the events of The Force Awakens roles around, whatever interest their story may hold in Star Wars is gobbled up a larger story line. I know some fans appreciate learning more about these characters who only make a small appearance in the movies. For me, however, knowing where things go for them makes it hard for me to care about them in the present in this issue. This is different from an old school Star Wars novel where a relationship like this could eventually spawn an entire story line, if not its own novel.

If there is one thing that consistently stands out about this series, on the other hand, it’s Terex. From his first appearance in the series he has been a magnetic lighting rod who makes every scene he is in interesting. The same proves true in issue 24, and I find that his interactions with Captain Phasma are delightful. 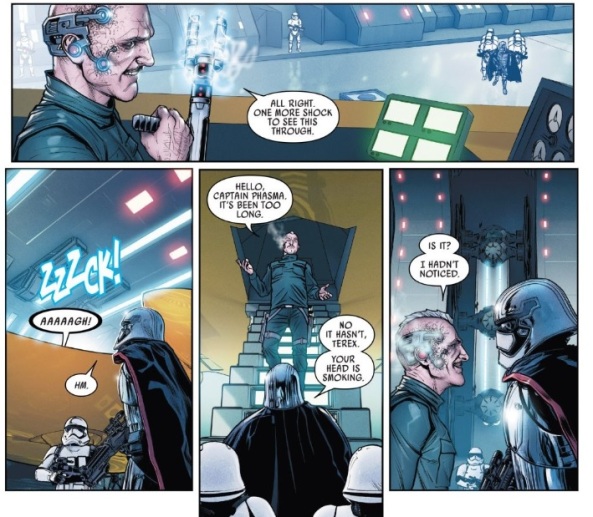 Here, as always, Terex is one step ahead of his adversaries. Having been betrayed and virtually enslaved by the First Order, Terex uses Lor San Tekka as leverage to get his electronic head implants removed. That Terex has planned to deceive the First Order from the start should really come as no surprise at this point, but that doesn’t make it any less enjoyable. Terex now hates Phasma and the First Order as much as he hates the Resistance and that’s turned him into a chaotic neutral character. Wherever he goes, trouble is soon to follow. Whether that means hurting the Poe Dameron or Captain Phasma matters little to him at this point. He’s out for himself. This makes him one of the few elements in the Poe Dameron comic that isn’t beholden to the future the series is steadily marching towards. How his particular story ends, and the destruction he causes in getting there, is a complete mystery and that’s what makes him such an exciting character.

Patrick, is this issue as ho-hum for you as it is for me, or did you find it more exciting? Is the narrative yoke of the Star Wars universe too great for this issue to pull away and do something interesting? Also, I really liked Angel Unzueta’s art in this issue — his attention to detail is really nice. Your thoughts?

Patrick: Oh man, you ain’t lying about Unzueta. All through this arc, but especially in this issue, he does such a fantastic job of leaning into Star Wars’ obsession with geometry. Y’know how every hanger door is a squat hexagon and every ship is a tightly choreographed dance of vectors and sharp angles? Unzueta keeps that mathematical certainty on every page, populating the backgrounds of panels with an almost ludicrous amount of trigonometric detail. 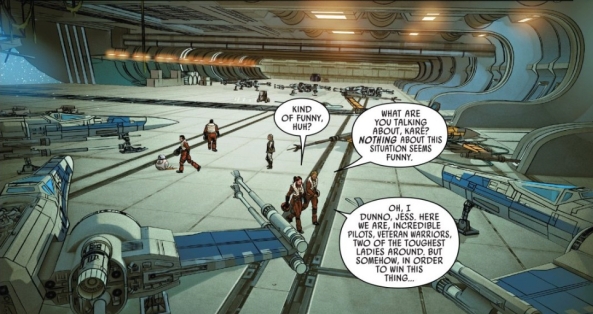 This level of detail expresses a kind of certainty that we are used to seeing in Star Wars — the certainty of what is good and what is evil. Taylor mentioned that Agent Terex, the obvious standout from both this issue and from the greater series, is a glaring exception to the series’ favorite moral binary. I’m never sure how much thematic information the Lucas Film Story Group shares across its multiple storytelling platforms, but the rise of chaotic ambivalence is a theme we start to see taking shape in The Last Jedi. There’s the hustler-hacker DJ, the amorality of Canto Bight arms dealers, and the staunch silence from the Resistances’ allies in their time of need. We are seeing a universe breaking under the weight of responsibility to take sides. Terex represents that refusal — he asserts his individual liberty over any single loyalty. This is basically the only time Unzueta will let his meticulous geometry melt away: when Terex puts up a W.

Of course, Unzueta isn’t alone in telling Terex’s story. I was tickled to see Leia leveraging her mother’s gowns for the purposes of springing Lor San Tekka from Trade Federation prison back in issue 21. I’m no prequel apologist, but there are legitimately astonishing aspects of those flicks, and Amidala’s wild costumes are among the most striking. They imply centuries of culture, and a ruling class that both slow to adapt and reticent to abandon tradition. They’re both inspiring and irritating, making the viewer wonder how she even gets into these things while simultaneously confessing that they do look dope though.

Terex has no such affinity for these gowns. Or, maybe he does and it doesn’t fucking matter: survivalism trumps sentimentality. I love the idea that Soule found a way to bring these dresses into his story, make them a functional plot device, and then lets his own erratic goblin flush it all away. 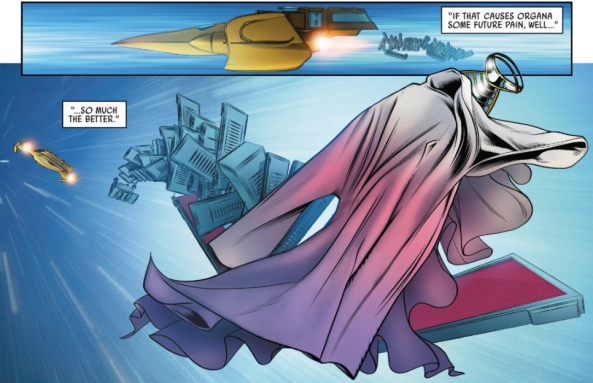 Soule puts Terex’s ethos right into the character’s mouth, should there be any confusion. “I think I finally realized the key to happiness. Stop caring about the fate of the galaxy.” Terex becomes a troll, more interested in thwarting the plans of others — whatever ends they’re after — than fulfilling any of his own goals. That’s a familiar scenario, isn’t it? “Both sides are evil” and “it’s dumb to care” have become a shield for the disaffected — the kind of apathetic anarchy that authoritarianism steamrolls so effectively.

All of which does make the question of whether Snap and Karē’s romance is distracting them from the fight feel a little trite. Perhaps to underline the knowing boringness of that conflict, Soule compares their restraint to that of the Jedi. Their maniacal chastity is arguably what turned Anakin Skywalker to the dark side, so while it is thematically relevant, it is also a stale-ass metaphor. We have been through this conflict before: it is literally part of the foundational story of this universe. The Snap and Karē scenes end up being demonstrative of what needs to be jettisoned for Star Wars: Poe Dameron to escape its moralistic, pedantic roots. Sure, I’ll miss those pretty dresses, but the only way to get to the future is to release the past.