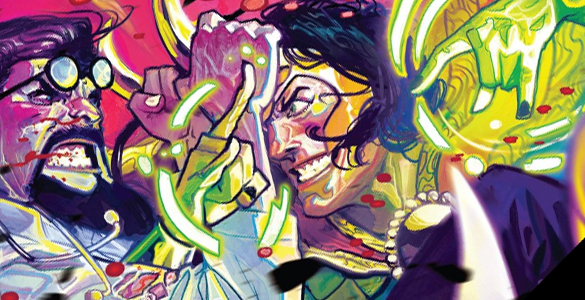 Patrick: Where does trust come from, narratively speaking? It’s almost a process of subtraction: audiences trust what they are presented with until they are given a reason not to. We’ll be dubious of anything a villain says because they demonstrate themselves to be dishonest, or greedy, or whatever it is that triggers our own feeling of moral superiority. Heroes are, of course, the opposite: we will trust them, even give them the benefit of the doubt when they make bad calls. Ultimately, we’re acting on our faith in narrative structure and we trust our hero to be in the right by the end of the story. Doctor Strange 385 twists our assumptions about right and wrong, about heroism and villainy without ever truly violating our expectations for Stephen Strange or Loki.

And that is the dichotomy at the heart of this arc: Strange vs. Loki. It’s a matter of how and why these  characters utilize deception. Strange is an opportunist — though his end-goals are almost always noble, he can steamroll innocents in order to achieve them. On the other hand, Loki’s goals are frequently unknowable, seemingly even to himself. Writer Donny Cates has some fun with this aspect of Loki’s character by stuffing his mouth full of possible explanations for his faking the tournament for the title of Sorcerer Supreme. 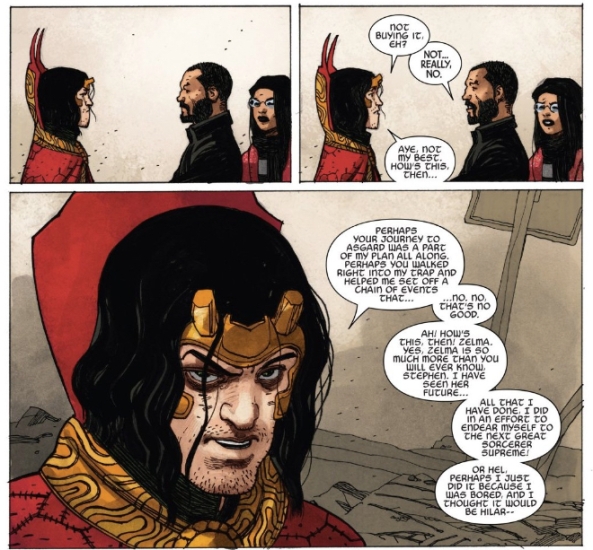 Cates and artist Gabriel Hernandez Walta play this moment for comedy. I love this dialogue-free panel of Loki’s first excuse not landing — the acting on Loki biting his lip is particularly effective. In fact, all three character’s mouths are shut in the first panel and open in the second. It’s like they were all holding their breath to see if anyone would take the bait. Of course, no one does, and Loki just tosses out every conceivable reason he could have had to redistribute magic. It would seem that the reason doesn’t matter, only the outcome.

Let’s compare that to Strange. This guy is doing what he thinks is right: unseating Loki as the Sorcerer Supreme. His methods for doing so reveal just how rotten Strange was all along. Sentry drives this point home when he arrives on the scene to re-exile the Void. Sentry’s more than happy to help, of course, but is enraged that he should need to help at all: Stephen told him that the Void was already contained. Walta and Cates telegraph Sentry’s anger with a series of BOOMs as he traverses the globe in the blink of an eye. The text never addresses what these BOOMs are — is he breaking the sound barrier repeatedly as he flies, or are these sound effects representative of his rage? We see a full KA-BOOM in the same panel Sentry lands a blow on the Void.

How you read Strange’s dishonesty in this scenario will probably vary from reader to reader. The Void was contained, and it wasn’t until Strange lost control of the Sanctum Santorum that that containment was called into question. That’s Strange in a nutshell, right? Everything’s fine as long as the dangerous things are under his control.

Keeping the Void locked up in his basement is a huge violation of trust, but it’s also one of those existence-threatening betrayals that’s too big to really wrap our heads around. Bonding the Exile of Singhsoon to Zelma’s soul is extremely personal, and it’s kind of mind boggling that Strange is surprised Zelma cannot forgive him for this violation of her spiritual being. Strange ends the issue alone, standing in the ruins of his old home.

Only that’s not totally true. One of the first casualties in Strange’s war on Loki was the dog Bats. We all love Bats (y’know, because he’s a good boy), and it was heartbreaking to see Strange offer his corpse to the World Tree. Loki shows genuine regret for Bats’ death and finds a way to bring Bats back as a ghost. A ghost which ultimately just mocks Strange. “Congratulations doc, you won.” Ouch, that’s some brutal poetic justice.

What do you think DeLaney? What was Loki up to this whole time? Does it matter? It seems like Strange’s biggest mistake is trying to measure himself against a character with no logical moral center, right?

Michael: Patrick, who can say what Loki was up to? Loki warns them of several things coming that they are not prepared for — including Infinity Countdown, a big Marvel event down the road. It’s possible then that there was a real answer buried within the litany of excuses that he provided to Zelma and Strange.

Does it matter that we don’t know what Loki was up to? Not really, for the purpose of this story. Loki is there to fulfill his raison d’etre: to cause chaos, as well as to be a fool for Stephen Strange. Loki’s time as Sorcerer Supreme drives Strange to desperation and thoughtlessness. In the end, Strange has lost almost everything: Zelma, Bats and nearly his life — because of his betrayal of trust.

Doctor Strange 385 zeroes in on two of those betrayals in particular: The Sentry and Zelma. Strange’s betrayal of Zelma is a dangerous omission akin to letting her drive a car with no brakes and no airbags. With Sentry, however, it’s a little more personal, which is why the guy almost punches Strange’s damn head off. 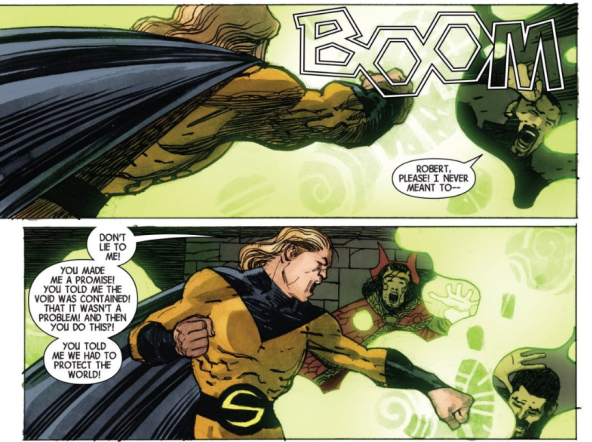 The way Strange uses The Sentry is like putting a recovering alcoholic in a room full of booze. Before Strange found him, Sentry was trying to find a way to kill himself and The Void. Strange brought Sentry back from the brink only to bring him face to face with his inner demon yet again.

Curiously, Loki is the one that saves Strange — possibly because he feels that he is partially to blame. Cates writes a very compelling and convincing God of Mischief. His actions and attitudes are as mysterious as his motivations. Coupled with Walta’s artwork, I found myself believing that Loki cared about and meant the things that he was saying, and maybe he did! With an opponent who is as indecipherable as Loki, it would be hard for Strange to measure himself, as Patrick pointed out.  I think that Loki’s tenure as Sorcerer Supreme was too short-lived, but who knows? Maybe he’ll pop up again somewhere down the line.

The magic of the Marvel Universe is deeply connected, a presence that every magic-user feels. During the fight with The Void, Loki taps into that well of magic to restore Strange’s power.

I think this is the most striking image of Doctor Strange 385. Walta’s work really embodies that idea of magical connectivity and the cost of magic. Loki uses his magic to dig into the Earth, establishing lightning roots that restore power to a handful of Marvel’s mages, including Magick and Brother Voodoo.

Let’s focus on the titular Doctor Strange for a moment, shall we? I’ve heard people say that Stephen Strange is just the Tony Stark of the magic world. I don’t love that comparison, because I think that Stark and Strange are both different levels of smart and dumb, but I understand it. Both Strange and Stark believe that they are the ultimate authority in their respective fields of magic and science. Strange’s ego leads him to believe that he can contain a force like the Void is no different from any of the dangerous weapons that Stark believes are only safe in his hands.

But where Tony Stark has an alcohol addiction, Stephen Strange has a power addiction. To be fair, Stark is probably addicted to power too. But like someone whose addiction left them ostracized from the people they’ve hurt, Strange is now all alone. He won…right?