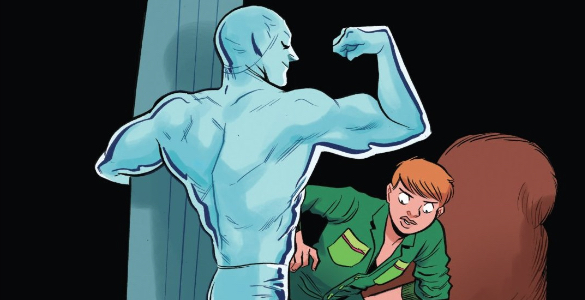 Back when the first Avengers movie came out, audiences were thrilled to see a fight between Thor and Iron Man. Fast-forward to last year, and many of the same audiences were similarly thrilled to see Thor fight the Hulk. That audiences love to see heroes fight each other is nothing new. There’s a very specific reason why people enjoy fights between comic book protagonists so much: it’s essentially a cinematic version of arguments comic book nerds have been having for ages — “who would win in a fight?” And truthfully, it isn’t only comic book fans who have been asking this question. Comic book creators have been discussing the question in issues for decades now. This debate continues in Unbeatable Squirrel Girl 29, only now it’s accompanied by Ryan North’s distinctive humor and irony.

Doreen is fighting the Silver Surfer because she thinks he’s an impostor posing as the Silver Surfer to extort money from unknowing planets. Things aren’t going well for Doreen, but thanks to Nancy, she learns she’s mistaken and promptly ends the fight. Thus the debate between who would win a fight between Squirrel Girl and the Silver Surfer is settled. And, as the Surfer points out, this kind of misunderstanding and fight happens often. 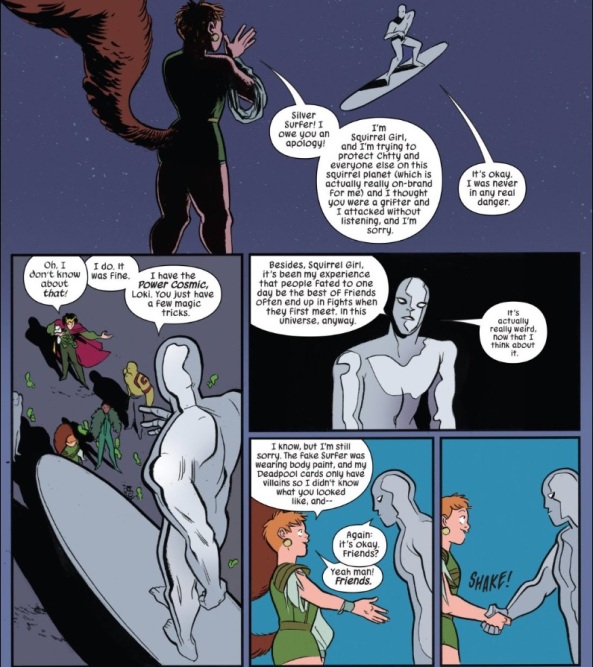 That heroes fated to one day be friends often start off by fighting each other is his observation in a nutshell. A quick mental survey of hero team-up stories proves that this is true, and makes the Surfer and Doreen’s fight just another entry in a long list of superhero fights. This observation is typically insightful fare for Ryan North. If there’s anything that North specializes in, it’s the ability to lightly satirize the very medium he is working in. In this case, he points out the the trope of heroes fighting each other, but only after he’s made that very thing happen in his comic first. This is clever because North is essentially calling out himself, along with all other comic book creators, for the very thing he is mocking in this issue. As always, North’s wry humor and self-awareness make this issue more than just the sum of its parts.