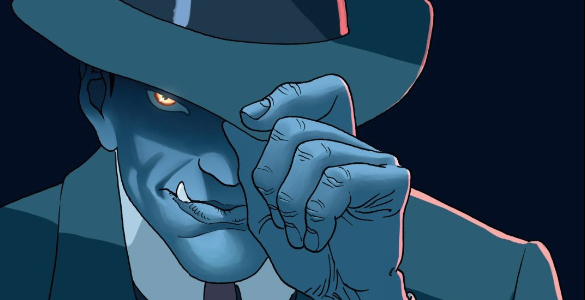 Patrick: On February 14th, a 19 year old former student opened fire on Marjory Stoneman Douglas High School. He killed 14 students and three teachers. The gunman had been expelled before completing school, and he bounced in and out of foster care. He suffered from depression, cut himself, frequented white supremacy websites, and actively posted about his desire to shoot up the school. When he was still a student, he wasn’t allowed to wear a backpack, because administrators feared he might bring something dangerous on the campus. On the day of the shooting, he was armed with an AR-15, which he had purchased legally. This shooting is a critical system failure. And that failure is necessarily the failure of the generation that came before both the shooter and his victims — the children punished for their parents’ crime of inaction. How does that happen? How does a generation obsessed with protecting their young end up harming them? Brian Azzarello and Eduardo Risso’s Moonshine 7  explores the devastating relationship between generations, staging acts of innocence and malice simultaneously.

It’s a heartrending issue, opening with narration that strikes too fucking close to home for a comic released on February 21st.

Once upon a time, there was a child. And was doomed. Because, God or devil — he wasn’t sure which — told the boy a terrible story. Remain a child, and you will be eaten. But if you grow up? You will eat children. The End. But it wasn’t. For when the child learned the secret… No. It was only the beginning.

Risso and colorist Christian Rossi support this narration with an impressionistic tale of a young boy — presumably Lou Pirlo as a boy — taking shelter in a store front, only to discover a greater threat in doors. Later in the issue, Pirlo narrates his experience being beaten by his father. He even tries to make it sound like it’s a good thing: y’know like getting the shit kicked out of him gave him the strength to fight off the police. Risso has no such delusions about whether or not this brawl is cool – it ain’t. It’s dark, messy, chaotic. 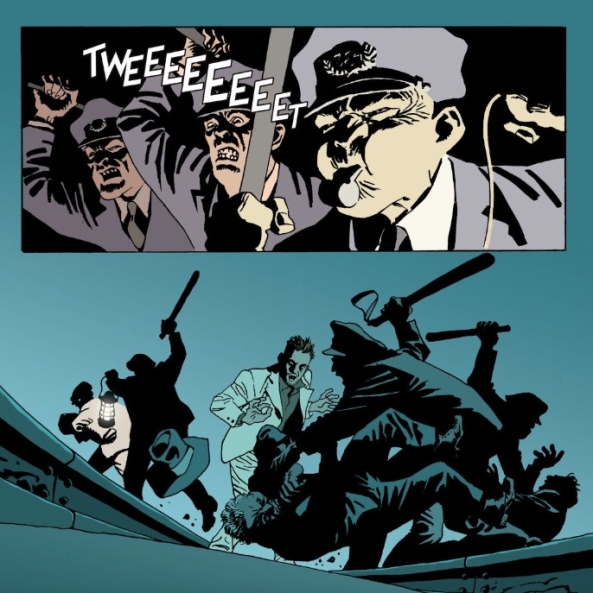 Pirlo’s not wrong, in the strictest sense. A life time of having to stand up to his drunken old man has emboldened him to take on officers of the law in hand to hand combat. However, it’s also doomed him to a life where this kind of violence is necessary.

That is literally the sins of father revisited on the son — a cycle of violence. It becomes a little more complicated when the issue pivots away from an actual paternal relationship. Back in town, L’ago juggles continuing his war on the lycanthropic moonshiners with entertaining the locals. It is… unsettling. 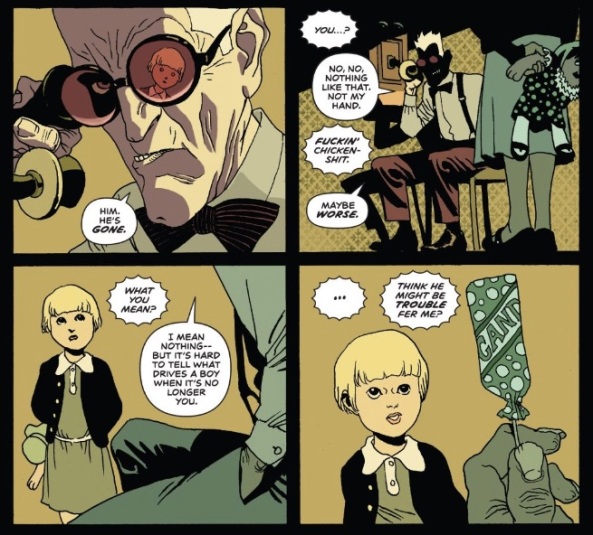 The same panel that he announces Pirlo has been taken care of, the face of a child appears reflected in his glasses. And Azzarello and Risso play every conceivable innocent note in the scale to quick-sell this kid’s untouched virute. Dolly? Check. Candy, labeled as “candy” to avoid confusion? Double check. I almost can’t deal with L’ago’s monstrous visage in that second panel, blacked out but for the horrifying red eyes.

Of course, that’s all training wheels for the literal war that Hiram has passed down to his family. Not only is his family left behind to fight Hiram’s enemies, they have to deal with his weapons. Tempest and Enos address their transformations frankly at the end of the issue. Just as Lou has to channel his father’s alcoholic bowery boxing moves to win a fight, Tempest and Enos have to turn into motherfucking wolf monsters to win their own fight. Enos simultaneously seems the most upset about it and the most matter-of-fact. The language Azzarello imbues him with to describe the sensation is phenomenal. “You see yer blood leave yer body, an’ go dancin’ before ya, don’ cha?” He is painfully aware of the price he pays turning into a beast, but he’s also calmly removing his clothes to ease the transformation. 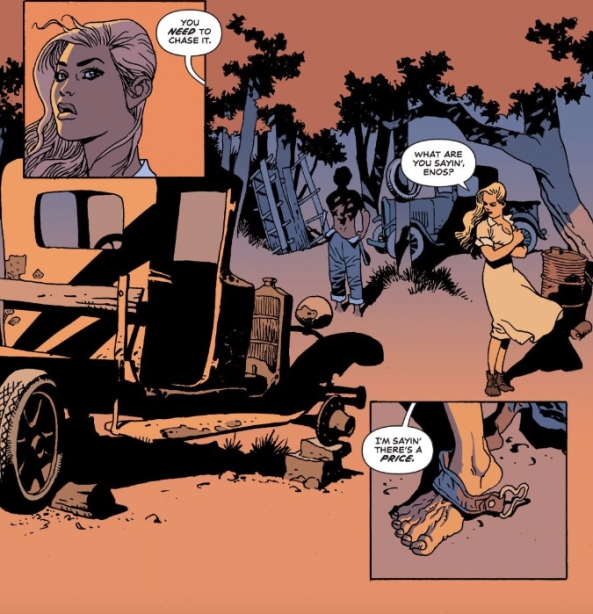 Moonshine paints kind of a dire scene for everyone. I mean, no one is anywhere near escaping — or even being aware enough to attempt escaping — from the violence they’ve inherited. It’s a great thrill to see this series back again, but it’s themes also feel too fucking relevant for this moment in history.

What’d you think of this issue, Drew? I don’t totally remember how Pirlo wound up riding the rails with Delia, but she almost seems like she’s above the cycle of violence, right? We don’t see her participate it in at all? Maybe that’s one of the benefits of being outside of the dominant culture — you don’t have to be a part of their self-destructive bullshit.

Drew: Or at least the combination of suffering the violence of that culture and being othered by it inoculates one to perpetuating it. Indeed, she has been a force of anti-violence in this series — the angel on Lou’s shoulder, trying futilely to protect him from Hiram’s werewolves. She sees a way out of these cycles, even as everyone else seems to see them as inevitable.

Only, they might actually be inevitable. Lycanthropy has been coded for many things over the years, from puberty to menstruation, which wraps it up in some notion of adulthood, or at least sexual maturity. But Moonshine has always taken a slightly different tack, drawing parallels (and delightful confusion) between Werewolfism and Lou’s own drunken blackouts. There’s whiffs of Jekyll and Hyde in there — drinking a potion turns a gentleman into a violent boor — but this issue introduces the notion that Lou’s drinking habit 1) started when he was a kid, 2) was inherited from his father, and 3) was always associated with violence. That’s a potent cocktail (if you’ll excuse the pun) — maybe more than any one man could be expected to resist.

Meanwhile, Enos’s conversation with Tempest emphasizes one of those other themes Werewolf stories often address: 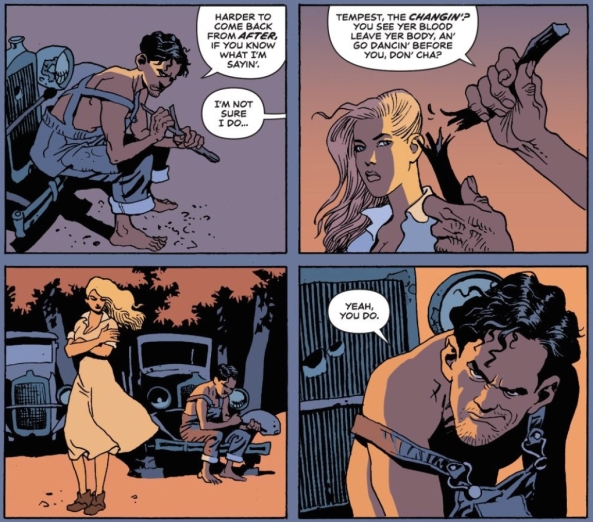 Maybe I’m taking “you see your blood leave your body” too literally, but it’s Enos’s insistence that Tempest knows what he’s talking about that convinces me that he’s at least hinting at menses. Or maybe I’m not taking that insistence literally enough. Leave it to Azzarello to hit his double meanings subtly enough that I’m never sure if I’m missing things or adding them myself. Still, its hard for me to not be reminded of that particular reading during this conversation.

Of course, Enos’ ultimate point, that his transformations are slowly eroding his humanity, doesn’t quite make sense for the menstrual reading. It might make more sense for the alcoholic reading — that it’s wearing on his life, and each escapade is harder and harder to return from — but I think Patrick raises a good point in suggesting this might all be about the problems a previous generation hands down to the next. It’s not entirely clear whether any of these werewolves have control over when and if they transform, but this whole conversation is sparked by Mama asking Enos to kill the mobsters. That is, it’s not the literal transformation that Enos is worried about, but the metaphorical one — he’s reluctant to kill because that’s the thing that’s hard to come back from. But he does it, and he does it because Mama asked him to.

In that way, I think the older generation in Moonshine has a much more active, direct role in the violence of the younger generation than your opening suggests, Patrick. They didn’t just stand idly by while their children got more violent — they forced them into violence. Lou was forced to fight by his dad. Enos is forced to kill by his mother. And because these acts of violence are tied up with werewolf transformations, they’re coded as a kind of coming of age. Lou became the violent alcoholic adult he is because he was forced to drink and fight at the age of ten or eleven. Enos’s transition into a violent monster is unfolding a bit more slowly (again, talking about the metaphorical monster), but is happening just as inextricably, and is even more tied up in transformation. These characters aren’t becoming violent adults because of their parents’ passivity, but because their parents actively drove them to violent ends.

It’s interesting that this issue — one of the least violent, that fight at the rail yard notwithstanding — should be the one to prompt this discussion, but it’s actually one of the more emotionally brutal chapters in this story so far. Lou’s story of abuse is hard to read, and I can’t help but feel for Enos as he laments the burden of being the family’s designated monster. And actually, that rail yard beatdown only emphasizes the brutal nature of this issue — the only person made to truly suffer the consequence of violence in this issue was only trying to break the cycle of violence, hoping to rescue Lou from his own demons. 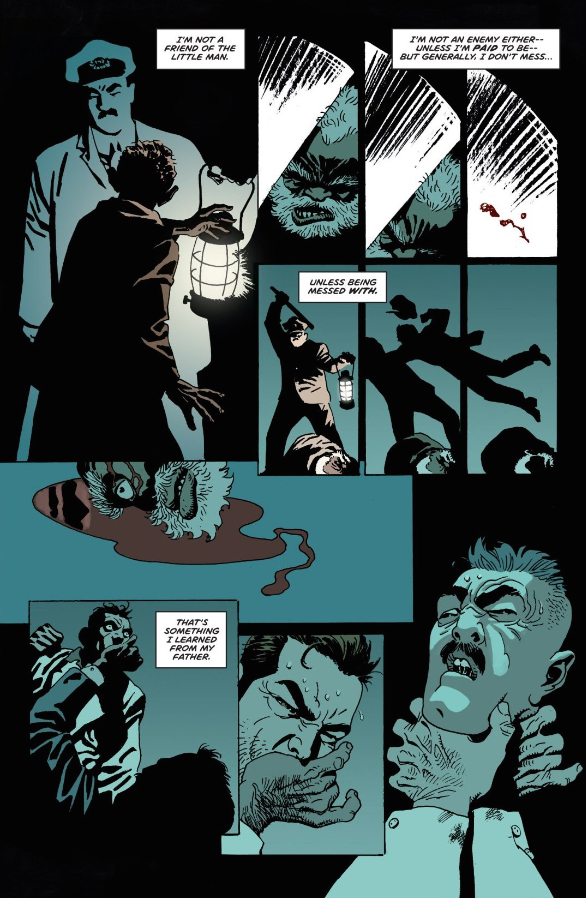 Unfortunately, his sacrifice throws Lou into a blind rage, dredging up all of that stuff about his dad. Violence begets violence, and the cycle continues.

And I suppose that’s why this series feels as timely as it does, even when it doesn’t feature a single gun going off — it’s about violence itself. It’s an unfortunately evergreen theme, but I can’t think of a better creative team to address it with such maturity and confidence. That may make it sometimes hard to read (and there’s little doubt that future issues will coincide with future real-world violence), but that’s also what makes it so rewarding. As much as this series may be about werewolves and gangsters, it’s also about the nature of humanity itself. That means it has its share of ugliness, for sure, but also beautiful and sad and familiar and oddly satisfying, too.