Spencer: Since our audience has excellent taste, I’m going to assume that you’re all watching NBC’s The Good Place, right? Essentially a show about lost souls trying to earn their way into Heaven by becoming better people, one of the more interesting concepts percolating beneath the show’s surface is the idea that the rules dictating what afterlife you’re sent to are inherently flawed and unfair. It’s almost impossible to earn your way into the Good Place — only the most selfless and charitable of souls make it — leaving plenty of folks who led wholly mediocre lives (or whose greatest crimes were being born in Florida) facing an eternity of torture and punishment. I couldn’t help but think of this while reading Nick Spencer, Donny Cates, and Rod Reis’ Doctor Strange: Damnation 1, which finds the city of Las Vegas, the Avengers, and perhaps the entire world being judged by equally biased, unfair rules.

Remember in Secret Empire, when the city of Las Vegas was destroyed by Hydra? With his newfound boost in power, Doctor Strange is finally able to do something about it, bringing back the city and resurrecting every soul lost in the attack. All magic has a cost, though, and in this case, the cost appears to be dragging Mephisto and a chunk of Hell back with the city. 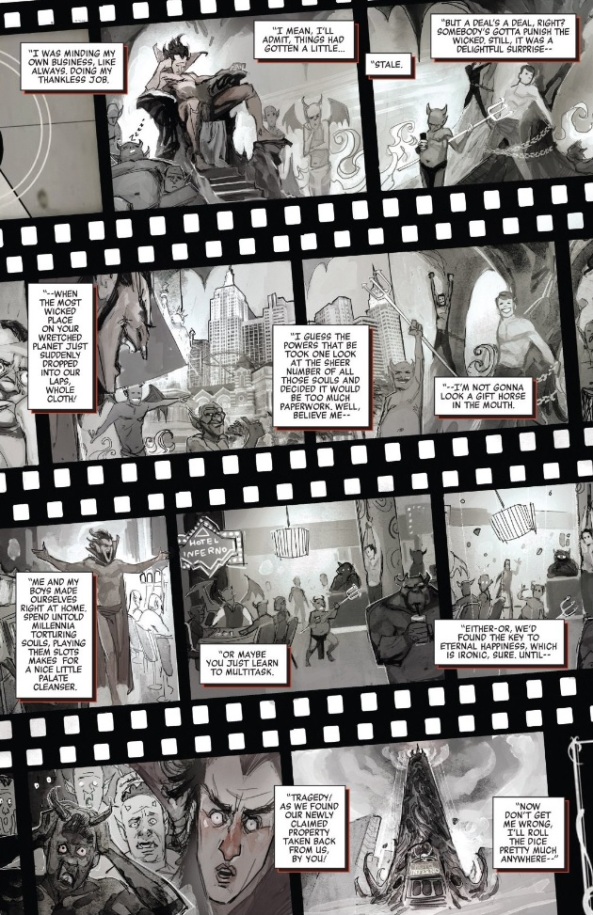 The creative team’s interpretation of Mephisto is wildly entertaining — he’s irreverent and theatrical, but still menacing — which almost masks how horrific this whole scenario is. An entire city is sent to Hell simply because of its reputation for sin, and because it would be too much effort to judge each soul individually. It’s immoral yet incredibly mundane, flawed not out of hatred, but out of bureaucracy — certainly akin to the business-like demons of The Good Place, but not that dissimilar from the disregard for human life so many lawmakers and businessmen have in real life either.

Now that Mephisto’s brought a chunk of Hell back to Earth with him, he’s claiming the souls of all sinners in his vicinity (and eventually across the globe), but by his own admission, he has a rather subjective definition of “sin.” The first we see fall victim to his control are a man cheating on his wife, a gangster, and looters robbing a store — maybe not deserving of eternal torment, but certainly bad people — but his judgment quickly spreads to far less deserving targets like strippers, a man who doesn’t put change in the parking meter, and a boxer. More problematic still, he next claims the Avengers themselves.

The Avengers’ sniping here is rooted in recent events and characterization in a way that makes it feel genuine, whether or not Mephisto is stoking their anger (and for the record, I’m genuinely unsure if he’s influencing them here or not). I don’t want to try too much to figure out which of this issue’s co-writers is responsible for which portion, but this scene feels like a direct continuation of Nick Spencer’s work in Civil War II: The Oath, where Stevil Rogers tried to paint the Avengers’ faults as major sins that made their defeat just and inevitable. Mephisto seems to share a similarly uncharitable view of these heroes, viewing their petty arguments as worthy of soul-stealing damnation.

In The Good Place, the afterlife’s rigid, unfair rules are a result of divine beings who underestimate humanity’s ability to grow and change, and who don’t truly understand human beings as well as they should — nor do most care to learn more. It’s not entirely clear if Mephisto is following strict and unfair rules of judgment or simply damning souls on a whim because he loves it (though I’m leaning towards the latter), but his actions likewise betray his indifference to the value of a human soul. He doesn’t care about humans, nor does he believe in them.

Stephen Strange is the exact opposite. He brought Las Vegas back because he cared about the lives lost there so deeply that he didn’t even care what consequences his actions might bring. While his facing Mephisto is him taking responsibility for his mistake, his gambit — betting Mephisto that good people, that heroes, that his friends will always come through in the end — belies his utter faith in the potential of humanity. The Avengers let him down, but other friends do not.

Bats the (ghost) dog is a true friend, seeking out help when Strange needs it most. Wong, on the other hand, is ready to leave Strange to handle his mistakes on his own, and truthfully, nobody could really blame him. “Las Vegas” perks his ears, though — Strange may not deserve Wong’s help, but all those other innocent souls do, and he can’t stand idly by as Mephisto threatens the world. As Strange predicted, Wong comes through when it matters most, assembling a team of Blade, Moon Knight, Elsa Moonstone, Doctor Voodoo, Man-Thing, Iron Fist, and Ghost Rider to combat Mephisto.

Together these heroes are more than capable of taking down Mephisto physically, but that’s not really the kind of threat he poses now, is it? The true test will be whether these heroes are strong enough morally to escape Mephisto’s judgment — or, if that’s even possible when the rules are stacked so significantly, so unfairly in Mephisto’s favor. I look forward to seeing how they’ll turn the tables on him.

Taylor, what’s your take on this event? And how about Rod Reis’ art and colors? His work is absolutely stunning throughout, but are there any specific moments you’d like to discuss?

Taylor: Oh man Spencer, that’s a tough question! There’s just so, so much to love about Reis’ artwork that choosing a few instances I like is hard. You might as well be asking me to choose between pizza or Chinese food when ordering in on a Friday night. As hard as that question is, there are a few moments that stand out in my mind as particularly wonderful. What I first like about Reis’ artwork is the way he portrays mood and tone with color and content. When Stephen first returns Las Vegas to the land of the living he is overcome with the happy feeling that he has done something wonderful.

What immediately strikes me about this page is how vibrant and light the colors are. Lots of light blues, white, and other natural colors permeate the page. These bright colors give the page a buoyancy right off the bat. Once you look at the actual content of the page, you see that these colors are no mistake. Scenes of families and couples hugging, dogs running in the grass, and a seemingly pristine city show just how wonderful it is for everyone to be brought back from the dead. Stephen’s face depicted in the middle of these scenes, sporting a satisfied smile, shows how he’s basically breathing it all in and feeling pretty damn happy about what he’s just done.

Just a few pages later, though, the tone shifts dramatically when Mephisto’s Hotel Inferno bores up from the ground. This shift in tone is jarring because the colors and content on this page are expertly juxtaposed with the page above. 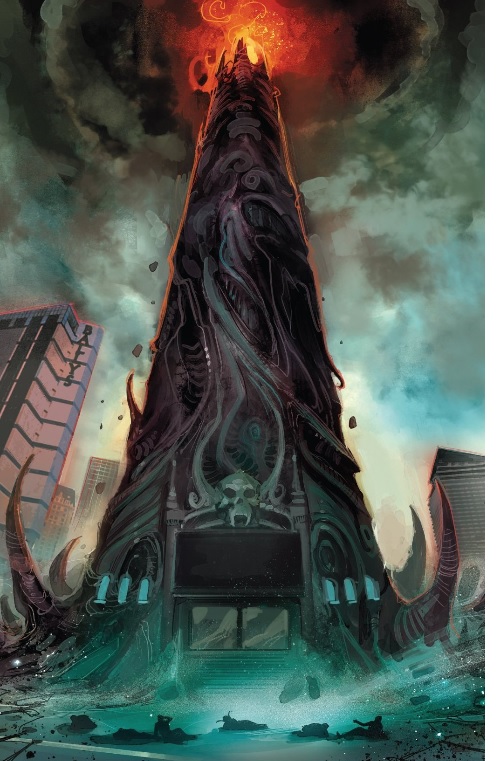 Whereas the scene of a resurrected Las Vegas is light in color, here it’s suddenly dark with the colors being dominated by black and a touch here and there of burning hot red. Black almost always signals something evil and that proves just so here, so it’s no wonder that this page shifts the feeling of the issue so abruptly. The content, of course, depicts Mephisto’s realm, which naturally includes all sort of skulls and pointy things that don’t exactly engender positive feelings. Then there’s Reis’ choice to position the angle of the panel below the tower. This accentuates the size of the tower which gives the impression that it is lording over Las Vegas, which it’s doing both figuratively and literally.

Both of these pages are grandiose in scale but it would be a mistake to assume that this is the only thing Reis is good at. Aside from Strange, the most important character in this issue is Mephisto, and it’s apparent that Reis is having a blast depicting him. Throughout the entire issue Mephisto changes things up on Stephen by teleporting him to new rooms and situations. These scenes usually change based on what Mephisto is talking about and just like his surroundings, the demon changes appearance, or at least depiction, as well. Just look at how these two close-ups of his face are different. 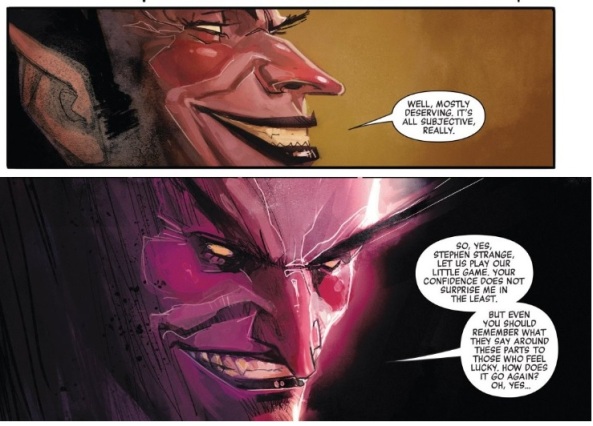 In the first panel, Mephisto is all suave and smooth talking about essentially conning people out of their souls. His depiction, likewise, shows him with rounded features and a face that is almost human-like. Essentially this is Mephisto at his most playful. However, when he tastes blood when Stephen offers to gamble with the demon, Mephisto is made up sharp angles and pointy teeth, revealing his more devilish side. These fluid depictions of Mephisto are great, detailed drawings that suggest the reality of Stephen’s situation is being bent as he’s led deeper into his enemy’s trap.

But the artwork isn’t the only thing I enjoyed about this issue. Nick Spencer and Donny Cates seem to understand what a Doctor Strange comic is all about because they makes sure to include everything in this issue which makes the series fun. When it comes to this aspect, just like Reis artwork, it’s difficult to choose one thing I liked the most. However, if my hand were forced I might have to go with the return of Stephen’s faithful dog, Bats, to the fold.

As exemplified here, Bats represents the more zany and weird parts of the Doctor Strange. He’s a talking ghost dog with an attitude much bigger than his small frame would suggest. Bats serves as a reminder that Doctor Strange, at its best, never takes itself too seriously. Bats embodies this ethos not only in form though. When he complains about nobody taking him seriously because he poops in the yard, it serves as a reminder of who and what exactly Bats is. He’s a talking ghost dog. On some level that’s always going to be goofy and weird and funny and that’s perfectly alright. In fact, I might argue, it’s what makes this series consistently stand out from others.

So, while I may not be a fan of the Good Place (sorry Spencer!), I found that reading this issue was anything but hellacious.