The damsel in distress is creaky, well-worn trope. It’s an obvious and immediate call to action, and an easy way to assert both the heroism and the masculinity of our heroes. But, like, it doesn’t really really explain the motivation of our adventurers, does it? Deadpool vs. Old Man Logan presents the recurring issues of two immortal warriors as a kind of “we need to rescue / we need to deal with Maddie” quest. But whatever her deal is, and whatever she really needs, is totally secondary to how Wade and Logan deal with the problems that keep cropping up in their lives. It’s a depressing reminder of how stuck both of these guys are.

Writer Declan Shalvey make s point of pitting the physicalities of his heroes against each other before turning to their competing ideologies. When it’s purely a physical contest, Deadpool represents “save Maddie” while Logan represents “kill Maddie.” It’ not particularly nuanced, as you might expect from two living weapons throwing themselves at each other. Artist Mike Henderson gives both of these killers almost adolescent postures during this sequence, leaning into that impotent defiance of kids who don’t know what they’re doing. 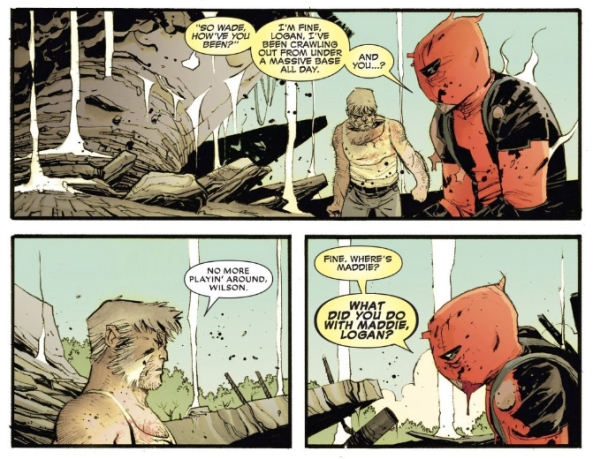 But something funny happens when Logan explains Maddie’s exit, and Henderson and Shalvey explain how Maddie killed her father by accidentally teleporting him into the room. Maddie becomes both as dangerous and lost as both Logan and Wade say she is. Which means neither one of them is able to see past their own emotional baggage to see the whole of the problem. Logan only sees another disastrous future he can try to prevent with a little snikt, and Wade only sees another little girl who needs to be protected.

They both come to a place where they realize their own shortcomings and are able to acknowledge the shortcomings of the other. Their story ends with an appropriately violent fist bump (snikt). But Shalvey mercilessly bounces us back over to the continuing adventures of Maddie, who is slickly taking revenge on the man who experimented on her. Wade and Logan may have worked out their garbage, but poor Maddie is left to sort it out for herself. Ironically, Logan and Wade at their most adult, may also be them at their least heroic.

One comment on “The End of Deadpool vs. Old Man Logan 5 Isn’t About Her”