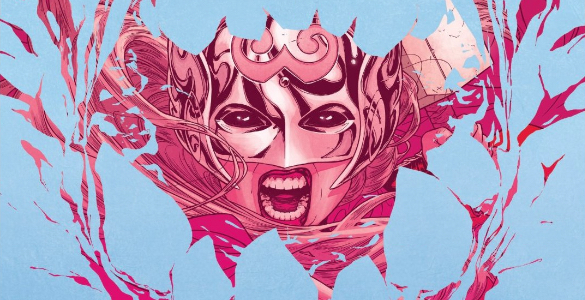 Heroes are predictable, at least in terms of the noble qualities that define heroism. That is, while a hero’s cunning plan or stroke of genius may surprise us, that they would try to save the day — even and especially at great risk to themselves — is kind of a foregone conclusion. And no hero represents that quality of self-sacrifice better than Jane Foster, whose daily choice to wield Mjolnir to protect others has slowly allowed her cancer to advance. So that she would take up the hammer once again, even with the knowledge that doing so would surely kill her, isn’t exactly a surprise Jason Aaron and Russell Dauterman could have hoped to withhold. So instead, they spend this issue detailing exactly what that decision means to her beyond self-sacrifice, getting at just what it is that makes Jane so selfless in the first place.

Split into three stories told in parallel, this issue chronicles both the destruction on Asgardia and Jane’s attempts to sit idly by while that destruction happens, but the most moving has to be the series of flashbacks that grapple with Jane’s own faith (or lack thereof). It starts with Jane’s mother, on her deathbed, lamenting that she had never introduced Jane to any religion that might bring her comfort, but also touches on the deaths of her father, ex-husband, and son. That last one is particularly impactful, as it happens after Jane has already befriended a literal god, suggesting that a relationship with (a) god may not bring the comfort her mother had hoped. 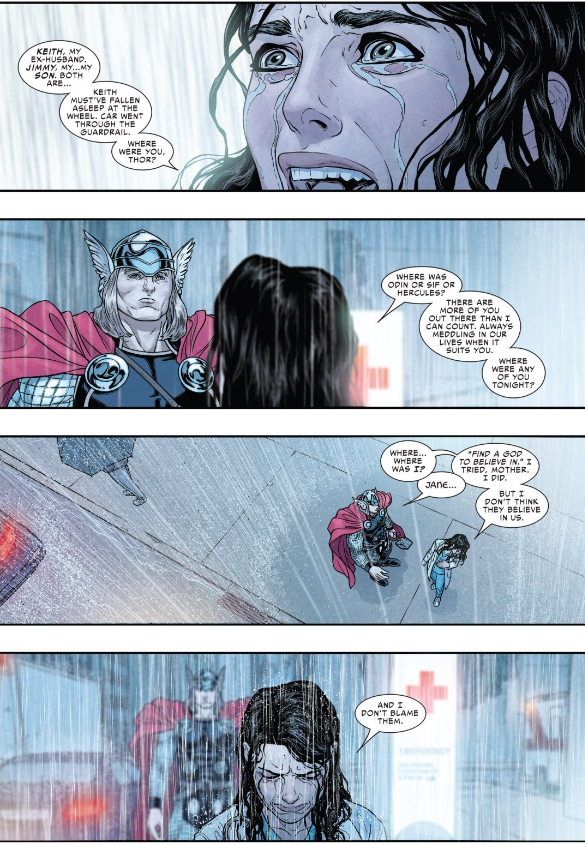 In that way, we might understand Jane’s self-sacrifice as a lack of faith — she doesn’t trust the gods or anyone else to save who needs saving, so she has no choice but to do it herself. It’s absolutely heartbreaking, but also challenges Mangog’s assertions that no god is compassionate and selfless enough to be above his scorn. Jane has to be more compassionate and selfless than the gods because she’s found them lacking so many times. That might just give her the edge over Mangog, but likely only because she’s doomed to actually follow through on that whole self-sacrifice thing. It’s a hel of a way to go, but Aaron and Dauterman perfectly justify it, helping us understand exactly how someone could come to make such a heroic gesture.