by Mark Mitchell and Patrick Ehlers 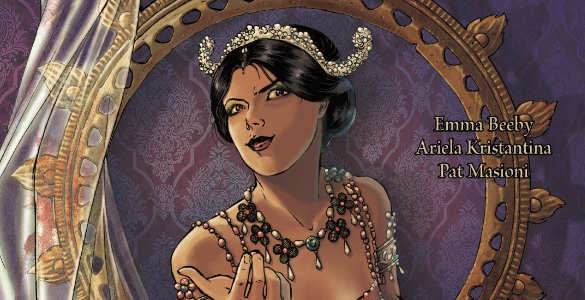 Mark: One of the corollaries to the Harvey Weinstein revelations and the #METOO and #TIMESUP movements is the healthy reexamination of other women in history who were victims, in one way or another, of systemic misogyny. Though they were produced before the movements began, last year’s Oscar nominated film I, Tonya makes the case for re-examining the way the media portrayed Tonya Harding — regardless of her guilt — and FX’s 2016 American Crime Story: The People vs OJ Simpson television series was a notably empathetic portrayal of lead prosecutor Marcia Clark. The point of these and other reexaminations isn’t to canonize these women, but to consider that the truth of their stories is more complicated than the convenient daytime talk show-like narratives that surround them.

Writer Emma Beeby calls out Harvey Weinstein by name in her author’s note at the end of Mata Hari 1, noting specifically that “now is the perfect moment to tell the story of what happens when women are without power.” Mata Hari is the stage name of Margaretha Zelle-MacLeod, a Dutch performer and accused spy who was put to death in the early 1900’s. We first meet Margaretha in a French prison for prostitutes at the end of her life; she’s putting her final affairs in order moments before her execution. What follows is a series of quick vignettes from different points in her life, all trying to help explain how she arrived at this end — her time on trial for espionage, as a model, a courtesan, a child in Holland — all passionately rendered by artist Ariela Kristantina and colorist Pat Masioni. Kristantina’s art does a lot of work in keeping the reader engaged through the disparate moments; it’s detailed and thoughtfully laid out in a way that allows multiple timelines to exist on a single page without descending into cacophony.

The idea of a five-part deep re-examination of an obscure historical player in a modern context is promising, but Mata Hari 1 is frustrating to discuss in isolation. The issue is a whirlwind overview of Margaretha’s life, but at no point do we get a sense of who Margaretha really is, or how she feels about anything outside of grief and confusion. My assumption is that since Mata Hari is not well known to most readers, Beeby has opted to give us the Rainbow Tour of her life as a hook, and that she plans to hit the brakes in future issues to allow for a look closer at Margaretha’s motivations. That’s my assumption, but it’s partly a leap of faith, given that Mata Hari 1 in isolation is interesting mostly only on a surface level. It’s engaging in the same way a Wikipedia article can be —  you learned something, but there’s no depth to the knowledge. The small insights into Margaretha we are given in the issue, such as her family’s loss of privilege when she was a child or a photograph of her daughter, practically have entries on TV Tropes at this point given how well-worn they are in the stories of fictional women characters (and what amount of this story is true and how much is Beeby’s invention is unclear).

But maybe that is in and of itself a superficial reading of the issue. All tropes have their genesis in something that was once original, and if Margaretha Zelle didn’t have the most breathtakingly Wes Anderson-esque existence, that doesn’t make it unworthy of examination.

The most effective moment for me in I, Tonya is a brief scene towards the end of the film when the media frenzy surrounding Harding is at its height where Harding warms up a microwave dinner in a cheap apartment while late night comics make easy jokes about her on the TV. Clearly, it’s more than likely that Tonya Harding was involved with the attack on Nancy Kerrigan at a criminal level, but it’s also easy to see how our perception of Harding as a human was colored by a specific narrative that society forces almost all groups that aren’t wealthy, straight, white, and male into. What’s interesting about Mata Hari 1 is that Margaretha Zelle maybe was a traitor and a German spy (we’ll have to wait and see if Beeby comes down on one side or the other), but that doesn’t mean she wasn’t also a victim of society’s attitudes towards women in the late 19th and early 20th centuries. Attempting to explore where those two lines intersect means Mata Hari is a book with a lot of potential.

Patrick: I think that conflict is really well identified, Mark. But I think there may be an inherent danger in hoping to see which side Beeby comes down on. To continue the comparison to I, Tonya, that film does present Harding as a victim, not only of society’s expectations of women (and fascination with a cat fight), but of a criminal conspiracy that erroneously places her at the center. The audience’s sympathies must be with Harding to make the punch of my favorite scene in the movie land: Harding stares at the camera and accuses the viewer of not giving her a fair shake. Beeby and Kristiana are perhaps being even bolder by never implying that Margaretha even deserved that fair shake. In that same letter at the end of the issue (which is great, by the way), Beeby describes the character as “often infuriating.” And I think that frustration with who is clearly a compelling character comes across clearly in this issue.

But, like, infuriating or not, Mata Hari is a damn compelling figure. Beeby and Kristiana make the size of her legend clear in the first couple pages by showing a portrait session in which Margaretha poses as Salome, complete with a the head of John the Baptist.

Obviously, Beeby and Kristiana are evoking some powerful-ass women from that sketchy place between history and myth, but it’s even more interesting to consider that Margaretha herself is evoking these same figures. The exchange “Do you want to see?” “I want everyone to see” is genius. It creates a sort of knowing bewilderment, like Margaretha’s only goal stay ahead of what everyone thinks of her.

That naturally extends to her memoirs, which she hands off to Bouchardon in the hopes that he will have her pages published. Of course, he doesn’t — he’s too well acquainted her her tactics to be taken in by such an obvious ploy to drum up sympathy. Instead, he lets the pages go off the side of a bridge, scattering them to the wind. Kristiana allows these pages to drift between the panels, transgressing both the panel dividers and the unity of time in the scene. A chyron at the top of the page identifies this action as taking place “Midday” which is, incidentally, the only time one of these boxes pops up with information that doesn’t reveal a specific date in history. The time of day is what’s on the creators’ minds here. Bouchardon throws the pages to the wind and look what happens:

The pages of her story flitter about from day until night. The sky has grown dark and the street lights are on — meaning that time has passed but her memoir is still stirring. The story has staying power, whether or not we can tie clear morality to any one player in it.

All of which says to me that Beeby has no intention of judging Mata Hari one way or the other. Telling her story is compulsory, and Kristian and Beeby make a strong case that being excited to read it is similarly beyond our control.