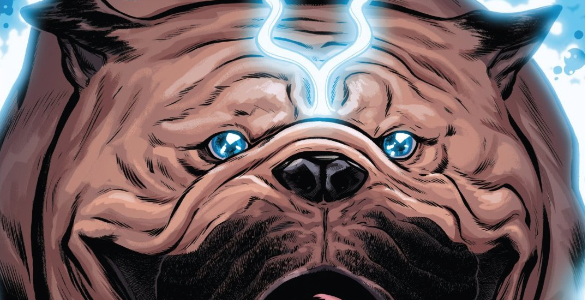 Taylor: Ancient wisdom states that you should never judge a book by it’s cover. We’re all familiar with this phrase and know that this metaphor extends far beyond assessing books by their cover art. Don’t judge people by the way they look and don’t assume a video game is good based on the franchise it hails from. Yet while I’m familiar with this sage advice, I often find it extremely hard to follow. Take Lockjaw 1, for example. It’s tempting to think this comic will be about its titular character, given his name splayed across the cover and the oversize likeness of this same dog. However, that’s not the case here, so how much you are inclined to judge a book by its cover might determine what you think of this issue.

I opened this book expecting to find some wacky adventures about Lockjaw, and at first the book doesn’t disappoint. In the opening pages, Lockjaw goes about arcane Inhuman dog business that no one, not even Black Bolt, understands or knows about. These pages deliver on exactly what the cover promises: a magic space-dog teleporting around the galaxy doing things that only make sense to him. In a way, this is wonderful. Even though humans often thrust human motivations and reasoning onto canines, the truth is that they’re still animals. In many ways, their motivations and logic will never be understood. This certainly seems to be the case with Lockjaw. No one knows what he’s about exactly, but that’s what makes the opening pages of this issue fun.

As fun as these pages are, however, there is something strange happening with Carlo Villas artwork. Lockjaw is a huge beast, yet in the first several scenes, it’s difficult to understand his size. Just look at the scene where Lockjaw visits the ever-cheery Karnak. 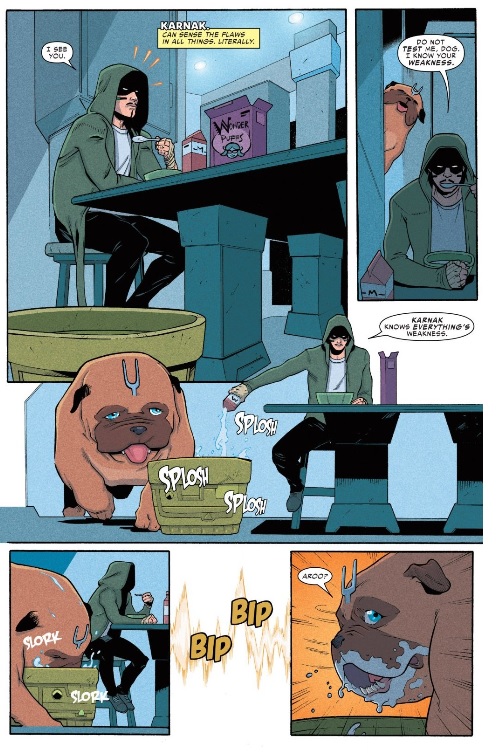 Showing something’s size in artwork is usually accomplished by positioning close to something recognizable. This helps us the viewer make a comparison to see how big or small the something in question is. Since Lockjaw is a dog, it’s easy to assume he is average dog size. That’s not the case, however, and Villas artwork here doesn’t successfully establish that. When Lockjaw first makes his appearance in this scene, he is in the background. Not knowing how long Karnak’s hallway is makes it impossible to see that Lockjaw is huge. The opposite things happens in the third panel. If you assume that Lockjaw is average dog size, it looks like he’s in the foreground of the panel. In reality he’s right next to Karnak. For whatever reason, though, that doesn’t necessarily translate in this or the next panel. Had Villas better established Lockjaw’s size, this scene would be much funnier because any time you can pair Karnak with a noticeably huge dog, things will work out for the better.

Getting back to the whole “don’t judge a book by its cover” thing, this issue takes a pretty big u-turn halfway through. At the beginning, the issue suggests that Lockjaw will be the main character in some sort of nutty, incomprehensible dog adventure. This all changes when Demolition Man, aka Dennis Dunphy, takes narrative control of the issue. 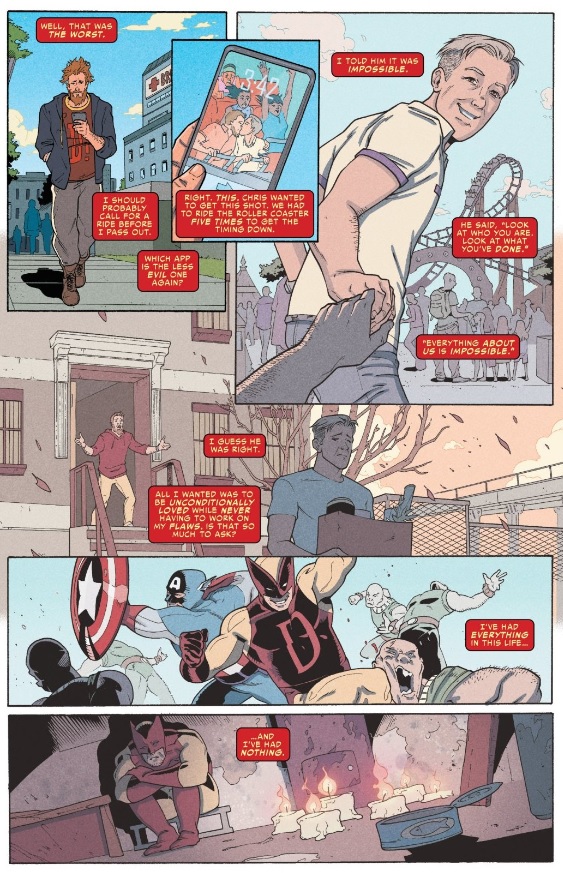 Starting with his intro a few pages before the one pictured here, the issue is narrated by, and follow the exploits of, “D-Man” as he navigates life as a washed up superhero down on his luck. While this part of the comic isn’t bad, per se, the transition to it does seems abrupt and unexpected. While I know to expect literally anything from a comic book, I didn’t see this coming and I’m still a little confused as to why it’s here and why now. The out-of-work hero thing has been done before (and done well) in Ant-Man, and for my money, I can’t see why this particular out-of-work hero is teaming up with Lockjaw. Maybe things will make a little more sense in later issues, and maybe it’s just a matter of taste, but I found this part of the issue out of place.

Patrick, I’m intrigued by the title and there are some good moments in this issue, but my overall reaction is the real-life version of a shrug emoji. Do you agree, or did you find this issue a little more entertaining? And do you have any idea what’s up with those killer space hamsters?

Patrick: “Killer Space Hamsters” sends a pretty clear message about what this series is. You’re reading a comedy. Which means I believe some of the confusion about shifts in tone (and character) are totally intentional, and feed into the strengths of the issue. For my money, the single funniest moment in the issue is when the narrative shifts its focus from Lockjaw to D-Man. LJ disappears into yet another self-made portal, following a spikey red waveform that’s been bip bip-ing across the page, and we get a totally-without-context narration box that reads “What is life?”

To this point, the dialogue in the issue has been terse and mysterious in a way that books featuring Karnak and Medusa can’t help but be. Karnak is mechanical, absolute in his belief he sees the weakness in all things. His rigidity is played for laughs on the first page Taylor posted (warped perspectives not withstanding). Yeah, bro, we know you can spot the weakness in everything, there’s a dog in your house who wants to drink a giant bowl of water like a good boy. Or how about Medusa, waxing poetic about the mysteries Lockjaw can experience? She’s elevating him, placing the inhuman dog on some kind of pedestal, while ol’ Lockjaw struggles to stratch himself behind the ear. “What is life?” is primed to be some overly serious musing by an overly serious stick in the mud.

But writer Daniel Kibblesmith gives us the exact opposite. On my first read, this panel made me laugh aloud twice. Twice.

“What is Life?” is D-Man playing along with Jeopardy. The clue is referring to Life Magazine, but the next contestant choses a category for which “What is Life” could very well also be correct answers. It’s a hard left turn early in the issue, but damn it all if Kibblesmith hasn’t used every tool in box to make this double punchline as surprising as possible.

What follows is a pretty intense exploration of who Dennis is outside of the context of his superhero persona. He’s a bachelor, living in relative squalor since his boyfriend left him. He’s got a sister in town, but he can’t find it in himself to be emotionally vulnerable with her. He’s angry about his life, but refuses to show his frustration to anyone close to him. He’s kind, but he’s also afraid of letting anyone get too close. There’s a lot of characterization here, and it’s amazing how quickly it all comes out, especially as we keep cutting over to see what that giant inhuman dog is up to.

D-Man’s misadventures (or non-adventures) have the tone set perfectly for humor, so when we re-join Lockjaw, we’re primed and ready to hear “heeuh gog.” The little-kid-isms are so fucking adorable, my heart melts every time this girl talks. What is Lockjaw doing at the Crawford Family Reunion? Per Taylor’s description above: “doing things that only make sense to him.”

But it’s important to note how differently Kibblesmith treats our subjects. We know everything about who D-Man is by the end of this issue, but we know very little about Lockjaw. Sure, sure, he teleports and can fight Killer Space Hamsters, but who is he and what does he value? We’re starting to see hints of threads that could flesh out the character of Lockjaw — he’s got doggie family, who knew? We learned a lot about Dennis by seeing him with his sister, perhaps we will learn more about LJ the same way.

Or maybe he’s a dog and all dogs are good boys and I’m projecting an arc on an animal. TOUGH TO SAY. What I can say with certainty is that I loved this issue. I’ll happily follow this magnificent beast where ever he fuuoomphs us.