When I was 15 my parents got a divorce, which, in so many words, sucked. I’m not going to bore you with all the details of my emotional state at that time, but one important and hard lesson I learned is that my parents aren’t perfect. The splitting up of a family is difficult and makes for ripe pickings for acknowledging the shortcomings of your loved ones. That being said, this lesson isn’t unique to me or other people whose parents have split. At some point, most children realize that their parents aren’t perfect and that they are indeed very flawed, just like we all are. This lesson is tough, but as Teenage Mutant Ninja Turtles 79 shows, acknowledging it is a key step in the maturation process.

The Triceraton’s assault on New York continues! Splinter has sided with the Earth Protection Force and is planning a sneak attack on the Tricertatons, much to the Turtles’ dismay. The foursome try to reason with Splinter but have no luck. However, after failing in appeals to their father, the Turtles try to convince Jennika, Splinter’s chunin, to help them. 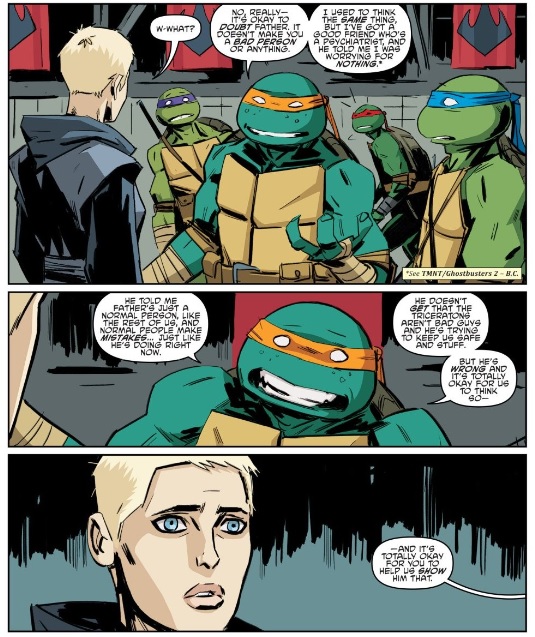 A chunin’s relationship with his or her master is much like the parent/child relationship, so in many ways Jennika is in the same boat as the Turtles when it comes to doubting Splinter, even if acknowledging that is difficult. But Mikey is there to assure her that it’s OK. As he learned from Peter Venkman, Mikey relays how it’s OK to doubt your parents. In fact, it’s good to do so because they are human and sometimes make mistakes just like everyone else. This connection allows the Turtles to persuade Jennika to help them as she too learns the hard lesson that parents and masters aren’t perfect.

It’s unsurprising that this lesson comes from Michelangelo. The writers of TMNT have done great job of rehabilitating Mikey’s “party dude” persona. Instead, they have shown that he’s a caring dude, who, while young, is advanced in his understanding of social-emotional matters. This is such a great development of this character. It’s taken him from being the butt end of jokes and made him perhaps the most important member of the Turtle Family. As is seen again and again, the turtles would be lost without Mikey, and he proves again and again that there are more powerful ways to wage battle than with your fists and nunchucks.