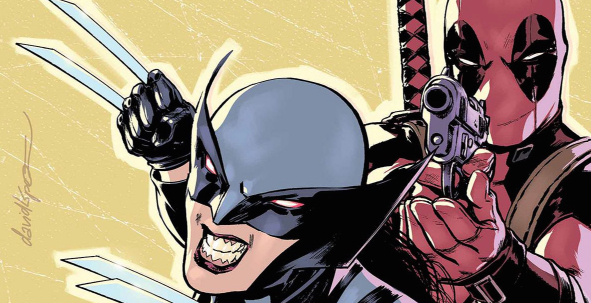 While reading All-New Wolverine 31, I realized that I have been measuring Deadpool team-ups by how good of a foil the other character is for the Merc with the Mouth. I like Deadpool with Captain America because their differences are obvious and legion. I like Deadpool with Logan, because while they’re both immortal murder machines, Logan sees the tragedy in his existence, while Wade somehow twists that into comedy. I like Deadpool with Spider-Man because there’s a sort of one-ups-manship there: “you think that’s goofy, Pete? WATCH THIS.” All-New Wolverine 31 presents a new kind of pairing: Deadpool and a character who is excited to learn from his example. Gabby’s not a foil, but their relationship is basically perfect.

And when I say “perfect,” I suppose I have to couch it in the admission that Deadpool is feeding into Gabby’s more impulsive, destructive tendencies. The issue starts with Gabby (and Jonathan) being punished for ruining a bird statue. Actually, this is something I had a question about: artist Marco Failla does not make the speaker in these first two panels totally clear, so I’m not able to read just how upset Laura is at the destruction on her dumb bird statue. 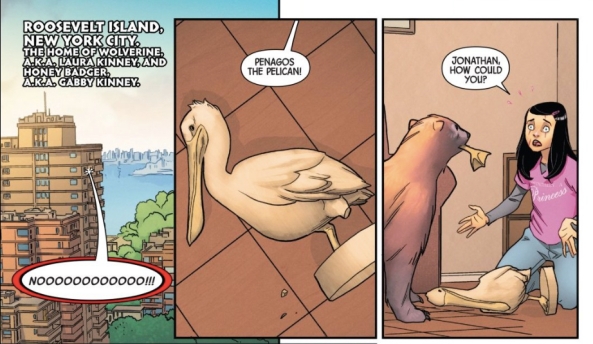 Is Gabby screaming NOOOOOOOOO!!! because she knows she’s going to be in trouble or is Laura screaming because she’s mad about Penagos? There’s no real way to know, and there may not be much of a difference. Either way, the link between non-destructive discipline and Laura is clear. So when Gabby encounters an opportunity to leverage some of her more violent tendencies for good, there’s only one person she can call for back-up.

Once Deadpool is on the scene, things get silly fast. Writer Tom Taylor makes hay of some routine chloroforming, delights in Jonathan’s intensely violent relationship with Wade, and ultimately turns the issue into a small-animals-are-zombies slaughterama. In short, this is a fun adventure, with no tough moral questions to quibble over. Of course, that kind of instant-righteousness that Gabby needs at this point in her journey.

In the final pages, our heroes set fire to the lab, and bask in the beauty of the destruction. Gabby says “Wow… catharsis is pretty,” but I’m not sure that’s totally complete. Gabby was fighting for a good cause, sure, but the scale of what she’s accomplished here is dwarfed by everything that’s come before in this series — I mean, just compare it to what we discussed in the previous issue. Maybe we’re marveling at the instant-catharsis of a satisfying smash-em-up with our chaotic friend Wade Wilson. Perfect team-up.