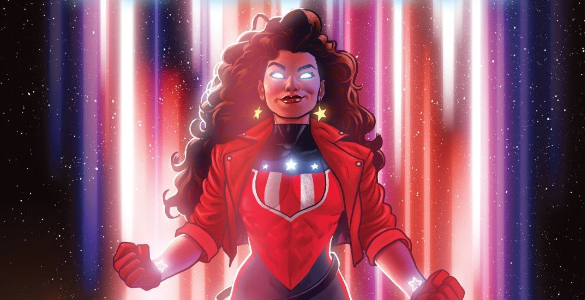 America opened with its title character ready to try something new, with the unfathomably strong, uber-competent hero deciding she had more to learn and heading off to school to learn it. America 12, the series’ grand finale, returns to this idea, with America saving the day by quite literally diving into the unknown and finding a way to fight her enemy that, for once, doesn’t involve her fists. It’s a beautiful sentiment, but one that works better in concept than in execution.

I suppose that’s been a problem with America as a whole, and it continues on through this final issue. In concept, America’s diving into the red cloud world of La Legion and learning to communicate with them, brokering peace instead of punching them to pieces, is a beautiful resolution to her character arc, her learning something new like she initially set out to do nearly a year ago. The execution falters, though, because America has almost no agency in this outcome. It isn’t her idea to explore the cloud, nor to communicate with La Legion — she’s simply following the orders of the Dues Ex Machina that is Uzam. If America has learned to embrace the unknown and try something new, it isn’t because of how she’s grown throughout this series, it’s because Uzam commanded her to, and that undercuts what should have been a strong character arc. I get what writer Gabby Rivera was going for here, she just missed the landing.

(Actually, a lot of this issue’s details don’t hold up under scrutiny. Why does Uzam activate after so long, and why does it only open up in this way to America? For that matter, why are La Legion so easily forgiven for an attempted genocide, and if they’re attacking Fuertona because their planet is dying, then how have they been able to keep attacking Fuertona for literal decades?)

That sentiment of diving into the unknown, though, does make for a rousing ending.

Artists Stacey Lee, Annie Wu, and Flaviano, and color artists Jordan Gibson and Chris O’Halloran knock this final page out of the park, emphasizing America’s power, personal growth, and the beauty of her flying off into the unknown. Rivera’s narration taps into the big ideas she seeded throughout America‘s 12 issue run and teases where they might have gone next, and these kind of big ideas and even bigger emotions have always been where America‘s excelled. This issue wasn’t as successful as it should have been, but at least it went out with a big, heart-swelling bang.