There are infinite possibilities occurring simultaneously, every second.

And with that, Jai Nitz and Wesley St. Claire lay out the case for more Fu Jitsu. Sure, they get more specific at the end of the issue, encouraging folks to spread the word about the series to help keep it alive, but the reason to keep it alive is revealed right there in Fu’s opening lines: this is a series built on infinite possibilities. Indeed, Nitz and St. Claire are so confident with that truth that they don’t need to bother explaining how future issues could even be possible. [SPOILERS aplenty after the break]

That Fu’s death (and Rachel’s) could be treated so offhandedly seems like it could rob that moment of stakes, but on the contrary, because the issue itself concludes without resolving anything, we’re left in this quantum world where they’re both alive and dead — taking death a good deal more seriously than most cliffhanger endings. Don’t get me wrong — Nitz and St. Claire are still very much having their cake and eating it too, but the fact that this very well may be the end of the series adds at least the potential for closure here that very few comic book deaths ever really have. 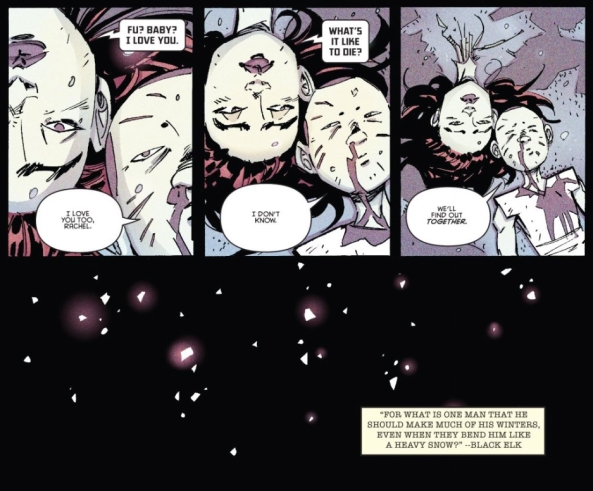 It’s a beautiful moment that exist paradoxically with our knowledge that they can never really die — they’re made of infinite possibilities. Maybe Fu can shift into another reality where they aren’t dying. Maybe we’ll get another time paradox where a time traveling Fu comes to save him so that he can live at least long enough to go back in time to save himself. Or maybe it has something to do with their son? There’s no way to guess the outcome of a series with infinite possibilities, which leaves us only to accept the outcome we’re presented: Fu and Rachel die defeating Wadlow, saving the world one last time. It doesn’t have to be the definitive ending to their story, but it’s not a bad one, all things considered.