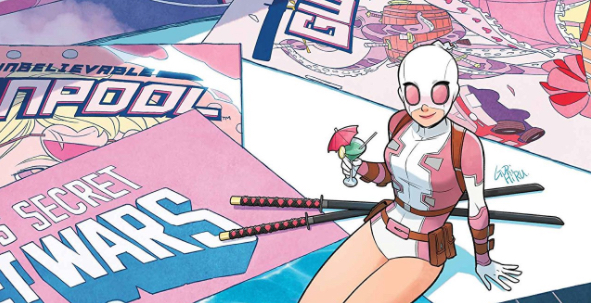 A couple months ago, I went to Disney Land for the first time. I’d been to Disney World in Orlando a bunch as a kid, but despite living in Southern California for the last seven years, I’d just not gotten around to visiting the Land. I went with my girlfriend, my best friend from back home and his wife. We had one day, but it was a nostalgia-fueled tornado of a good time. We were there until after the park closed, and in that last half hour or so, we got on more rides and ran around that park more than we had in the previous 5 hours. You do anything to make the most of those last precious minutes. As The Unbelievable Gwenpool comes to a close, Gwen finds herself doing very much the same.

Only comic books aren’t measured in minutes, are they? Early in this issue, Gwen is gifted a wristwatch that is counting down to… something. When she gets it, it’s displaying the number 15: since it’s pretty early in the issue, and the reader is well-tuned to Gwenpool’s meta-shenanigans, we’re able to figure out what the watch is counting down. Pages. To this point, the story has already been accelerated, with huge swaths of exposition and action left off the page. I love that, somehow, Doctors Strange and Doom are able to perceive it. 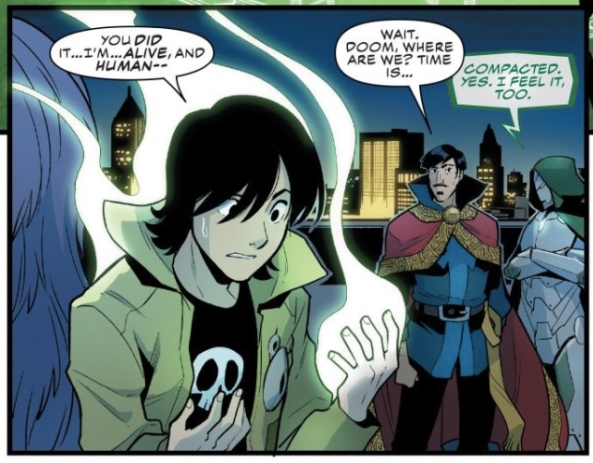 It’s a cute conceit, and something that we talk about a lot on this site: time is expressed through space in comic books. And that’s out of necessity. We tend to think about comics as existing for the sole moment we read them, with only a handful living on in the canon forever. But the truth is that there is no time in comics — any series could be considered on-going as long as someone can revisit it in the future. Time is exclusively experienced and controlled by the reader. Seeing Gwen’s countdown watch approach zero actually make me slow down my read because I knew the consequences of getting to the end. Or at least, I assumed I did. Writer Christopher Hastings, it turns out, had something different in mind.

That last page is so brilliant. It places the “gutter” scenes in time — after Gwen visits the deathbed of a woman who she saved as a little girl. That implies that 80-90 years have been collapsed into a few pages. But more importantly, Gwen stepping up off the page after the last incident of the issue sorta forces the reader back to page 2 of this issue, where Gwen starts chatting with the older version of herself. That draws a sort of narrative circle around this issue.

And in exploring that circle, Hastings and artists Gurihiru recall almost every plot point from the entire series. They bring back Gwen’s parents, return Cecil to a human body, they loop in Squirrel Girl, they even bring M.O.D.O.K. back from space. It’s a series of buttons on all my favorite Gwenpool stories, practically forcing a re-read. And that is precisely how this series never ends — because we’ve been given a reason to look back and read it all again.

One comment on “With Issue 25 The Unbelievable Gwenpool Never Ends”