Last time we wrote about X-Men Red, Spencer and Ryan saw the series as somewhat foundational — asserting the attributes that makes an X-Men comic and X-Men comic. That means both the soapy sci-fi details of the characters’ pasts and the political commentary were turned up to 10. The scale for both was just huge — I mean, Jean addresses the United Nations and was framed for murdering the UK ambassador for crying out loud. X-Men Red 2 continues to engage in the same kind of character- and political-work, while scaling back to considerably more personal levels, and the result is almost intimate. Writer Tom Taylor and artist Mahmud Asrar have such a strong handle on these characters’ voices, the moments don’t need to be huge to make them impactful.

And, y’know, for as much as I like the high-level intrigue of clearing Jean Grey’s name, I love grounding these characters with some political exile in Wakanda. The global political angle doesn’t disappear from this issue, but it is brought back down to more manageable level. Instead of seeing the goings-on of ambassadors and world leaders, we’re seeing pundits argue on TV, and crowds of protestors with torches that bear an uncanny resemblance to the Unite the Right-ers in Charlottesville. 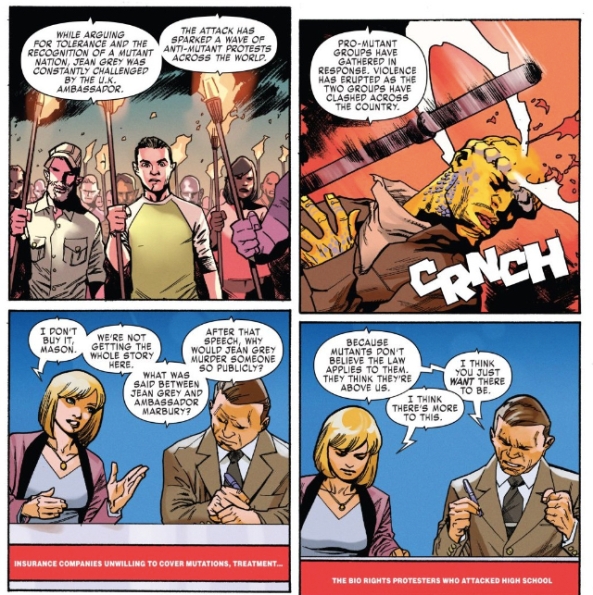 The slightly staggered vertical alignment of these panels emphasizes the sense of unrest already apparent in this scene. The world is an angry, messy place, and it’s good that our heroes are able to remove themselves from it to gather themselves.

Taylor’s secret weapon in all of this is Gabby, the Honey Badger. Sure, Jean Grey is the star of the show, but she’s almost too powerful and too self-assured to really relate to. She never goes into fully into unrelatable-mode, but I’m not totally sure I understand how. Asrar does manage to capture Jean’s humanity in just about every panel, and she’s always dressed in more ordinary clothes than her team mates. (While everyone else is dressed in tactical gear, Jean sports a yellow hoody.) And her interactions with Gabby go a long way towards grounding her as well. Look, we all love Gabby: she’s fun, she’s cute, she’s inquisitive, she likes being an X-man in a way that’s super dorky and/or obsessive. So when Gabby asks if she can poke someone in a telepathic stupor and Jean sorta shrugs?

This is just what I needed to get into this series. Operatic drama is great and all, but I appreciate the reminder that we’re dealing with characters and concepts that I actually like and relate to.