What would you say to your younger self if you had a chance? Would you try to change the future or just enjoy the literal stroll down memory lane? Peter Parker: The Spectacular Spider-Man 301 does a little bit of both, actually. J. Jonah Jameson and Peter have traveled back in time a little earlier than their target date and have some time to kill. Peter spends it thwipping webs with his younger counterpart while Jonah enlists his younger self to track down The Tinkerer.

Ever since Chip Zdarsky had Peter reveal his secret identity to Jonah, ‘ol flat top has been going through some self-reflection on his campaign against Spidey. The opening pages of the issue put Jonah face to face with teenaged Peter Parker, which really puts things into perspective for him.

Joe Quinones distinguishes between the two Peters by height and hairstyle, throwing in a couple of lines to indicate peach fuzz and/or acne. I’m not sure if this is intentional but young Peter screams Tom Holland to me.

Contrast that to Quinones’ rendering of the two Jonahs Jameson, which is nearly identical. Zdarsky establishes that this is an alternate timeline and they “can’t change our future.” Nevertheless both Jonah and Peter spend the issue trying to…change the future. I guess we shouldn’t worry too much about the continuity logistics but on the personal symbolism. Jonah tries to prepare himself for the introduction and inevitable death of his wife Marla and warns him about his vendetta against Spider-Man — even revealing his identity in the standout iamge of the issue. 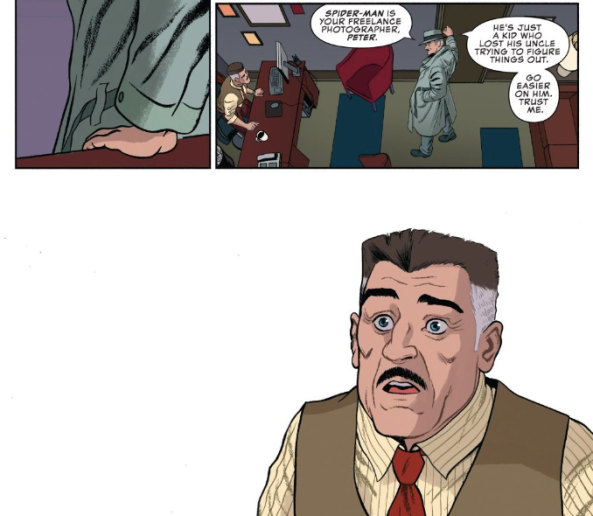 Peter on the other hand is a time travel veteran by now, so he does “change” somethings but it’s like replaying an old video game you’ve beaten with some cheat codes. Jonah and Peter’s approaches to time travel are both understandable, but I think most of us would go Jonah’s concerned route than Peter’s carefree one.