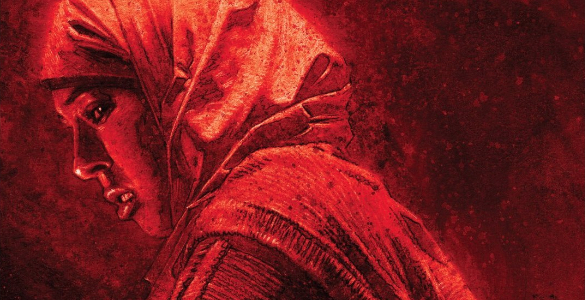 Drew: I’m not sure there’s anything we fear quite like the unknown. Whether it’s xenophobia or just things that go bump in the night, every fear is defined by the things we don’t (yet) understand. And while our society has legitimized the former (effectively forgetting that it’s as nonsensical as the latter) all fears spring from that same well of the unknown. Which is what makes Pornsak Pichetshote and Aaron Campbell’s Infidel so alluring; they’ve brought those fears back together, using supernatural elements to illustrate the more pressing real-world fears its characters live with.

We’re introduced to Aisha in what may or may not be a nightmare. That is, we’re not sure if it’s real — there’s really no doubt that Campbell’s images are truly nightmarish: 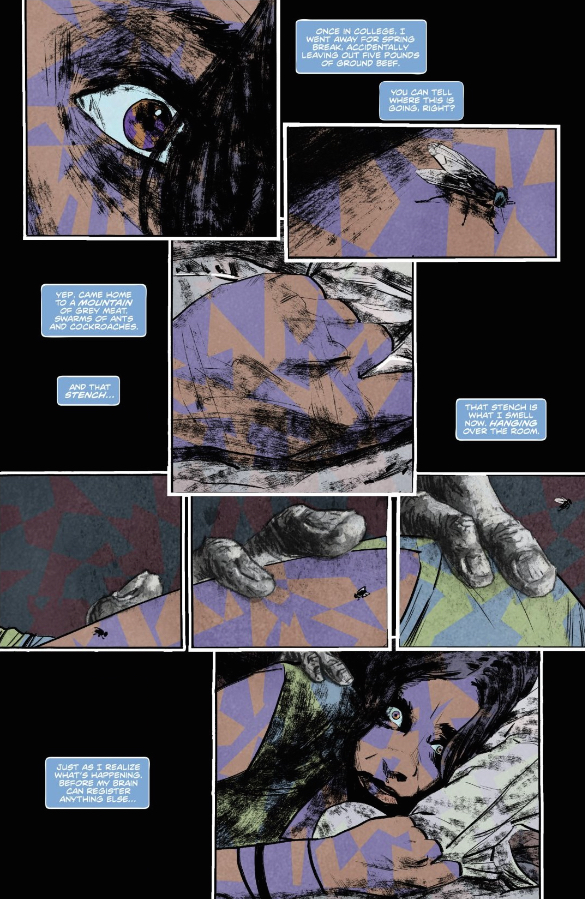 Pair that with Pichetshote’s chilling prose, and you have some of the best horror Vertigo never published. And I mean that as high praise — Pichetshote mentions both Vertigo and editor Karen Berger in this issue’s backmatter, and this issue would be right at home at Vertigo’s heyday.

But back to my point: what makes this sequence particularly unsettling is that question of whether or not it’s a dream — that it’s left unknown. Aisha dismisses it as a dream, albeit the worst yet in an escalating series of nightmares, but then again, she may have a habit of ignoring things that she genuinely should be afraid of. Her maybe-actually-happening nightmares are our first hint of that, but the more pressing seems to be her fiancee’s mother, Leslie, whose formerly overt Islamophobia is either clearing up or being driven underground. Once again, the exact nature of Aisha’s reality isn’t made clear, leaving us with yet another unknown to fear.

Those two unknowns make for a great parallel construction, but Pichetshote cleverly twists the knife further with another parallel — Aisha’s own mother also disapproves of her upcoming marriage because her fiancee isn’t Muslim. That is, if Aisha is too Muslim for Leslie, she’s not nearly Muslim enough for her own mother, leaving her in this impossible place with her own identity. And it’s a problem her fiancee, Tom, seems largely oblivious to. He’s quick to anger over his mother’s micro-aggressions, but his humanity isn’t called into question in the same way. Moreover, he doesn’t have a relationship with Aisha’s mother to be poisoned by their engagement. Aisha is on her own in this, which makes her inability to identify potential dangers a huge liability.

Which might just make her an ideal horror protagonist? Aisha isn’t afraid just yet, but maybe she should be. Though that fear isn’t of the unknown, but of fear itself (which the solicit suggests is empowering the ghouls that are terrorizing her). That’s a horror message I can get behind, and seems tailor-made for these fear-mongering days we live in. Years of ignoring those fears have desensitized Aisha to them, leaving her oblivious to just how dangerous they may have gotten — it’s Trumpian xenophobia on an individual scale, and it makes for some riveting horror.

Ryan, I feel like the last time you and I chatted about a horror comic, I was left wondering whether my boredom was with the genre itself, or just the comic at hand, but this issue has reassured me that I actually like horror just fine when it’s done well. And this really is done well. Campbell’s art is gritty and atmospheric, and his pacing utilizes just about every trick to full effect. There’s suspense and gore and jump-scares and psychological horror all rolled up in one tight little package that broadcasts a distinctly unsettling mood for this series — even when there are no ghosts to be seen.

Everything is still claustrophobic and tense and ugly. This series hasn’t yet laid out the specifics of the “ghosts feed on fear” premise, but you can already feel that this story is set in a world where folks’ worst fears are running rampant. It’s an aesthetic that doesn’t require a whole lot of suspension of disbelief, which makes the rest of the horrors only feel more real.

Ryan, I’m curious to hear your reactions to this issue. Did the more overt horror elements work for you? And how did you feel those elements fit with the more everyday horrors captured in this issue? Does this issue shine a light on those issues, or does putting them next to literal ghosts trivialize them in some way?

Ryan D: Gosh, Drew, I feel like the mixing of the every-day horrors with the supernatural being so seamless is exactly why this opening issue shines. In a lot of horror films, the scares are often held as separate from the rest of the film. The group of teenagers plays drinking games in one room while the horrors take place when someone goes out behind the cabin to get more firewood, or whatever. Here, though, everything seems to overlap in a big, fascinating Venn Diagram of tension.

No scene encapsulates this better than the climax of the issue. Aisha finds herself cornered by a spectre, and lashes out with a kitchen knife, only to strike her mother-in-law instead:

The big reveal is, of course, that we can see that dear ol’ mum might be the ghost, or possessed by its spirit, or something, but the beauty of this choice is that ambiguity and conflation which runs through the entire issue of whether this is a dream, or supernatural, or real-world horror.  Even when Aisha sees that crazy face in the hallway under construction, she proceeds to have an important conversation with her husband in the same exact space where that scare just took place. These ghosts infect every aspect of this woman’s life.

This story is, essentially, a haunted house story — one of the oldest, tried-and-true horror devices there is. That is by no means reductively saying that this story is simple; some of the best pieces of fiction start in that genre cliche and use it to tell an incredibly deep, complex narrative, with Toni Morrison’s Beloved for example, or Alien, which is essentially a haunted house in space. What this device allows is that idea of no space being safe in the protagonist’s life. Just look at where these spirits haunt Aisha: first in her bedroom, the hallway to her apartment, and in her kitchen. The larger statement here, since we are conflating the supernatural with the psychological impact of xenophobia on its victims, is that the many micro-aggressions suffered through the day come home with someone, do not let them rest at night, and infiltrate family spaces and dynamics. It’s really provocative, high-level commentary going on here.

Not only is this woman’s personal places of safety being challenged, but the ghosts attack her in very telling ways inherently linked to the struggle of women of minority. When we get our full-frontal reveal of an apparition, here’s what we see:

This ghost is not merely a physical danger to Aisha. It comes in the form of a naked man uttering words of hate and female derision as it attacks her. So much of the threat posed by these spirits comes across as inherently sexual, which matches with how a lot of the “fear of other” is handled by males in particular. I do not think it’s unfair of me to point out that many forms of overt bigotry manifest themselves as aggressive threats of sexual violence to women of the minority group. The fact that Leslie is also corrupted by these evil spirits also speaks to the woman on woman judgement of feminine ideals which Leslie projects onto her hijab-wearing daughter-in-law.

Thanks to all of this rich nuance and subtext, the horror remains pervasive throughout this title. I can’t help but draw a parallel to Kamala Khan from Ms. Marvel — both feature female protagonists who try to build a life while being held to two disparate cultural standards, and both utilize genre to thematically unify the narrative threats with the personal struggle. Infidel 1 is confident, consistent, beautiful, scary, and important, and while what’ll happen in issue two is unknown, I find that exciting, not scary.