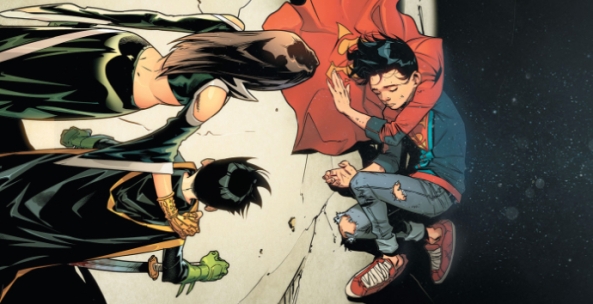 The battle between Damian Wayne and his mother, Talia al Ghul, is the centerpiece of Super Sons 14, but it’s a showdown I feel like I’ve seen before. I don’t mean the actual physical fight, which is well choreographed and which artist Carlo Barberi fills with hits that look like they really hurt; it’s their argument, the words and ideas they toss back and forth, which feels lifted from every other Damian/Talia story I’ve ever read. Thankfully, writer Peter Tomasi brings it all to an interesting conclusion; the idea that Damian is upset that, no matter what he does, he’ll never be able to please both of his parents is an affecting one, and is probably familiar to many children of divorce (at least the more contentious ones). It’s a great place to end the issue, even if it doesn’t do much to lift up the rest of the fighting that came before.

Thankfully, Jon Kent’s half of the issue shines where Damian’s doesn’t.

Damian is such a strong character that Jon sometimes feels less defined, like he’s just there to be Damian’s foil, but Tomasi and Barberi get a lot of mileage out of Jon’s optimism and child-like enthusiasm this month. It also helps that, in contrast to Damian’s deadly-serious half of the issue, Superboy’s plot is allowed to be funny.

Barberi’s work consistently impresses me throughout the issue; besides his smart fight layouts, there’s the cool semi-transparent shot of Superboy deflecting Talia’s bullet that really stands out. Here it’s Jon’s body language in the first panel that I love, his puffy cheeks and the smoke coming off his knees (from deflecting that bullet at superspeed) that makes me laugh. That woman screaming in the final panel is another great gag as well; I think I actually laughed out loud at that one.

I actually wouldn’t have minded a little more pathos out of Jon, as he almost seems too calm about his mother being targeted by an assassin, but the moments where Lois and Jon do interact are golden. I feel like this mother/son bond has been a bit neglected in favor of Jon/Superman, so it’s fun to get to see them spend time together, even if they do have to hide the fact that they know each other at all. Jon’s awkward attempts to hide his identity (and hide his mission from Lois) are adorable, but I love how Lois immediately knows that Jon’s hiding something from her and lets him know this in no uncertain terms. Yet, while Jon seems to think he’s grounded, I get the impression that Lois trusts that he’s doing the right thing and just wants him to know that he can’t hide anything from her. It’s a smart use of Lois as a character, a nice contrast to Damian and Talia’s far more screwed up dynamic, and a nice opportunity for Jon to stand on his own without Damian.