The density of prose, as well as the ample opportunities for dialogue and conversations, make novels a format that excels in rich, deep characterization; there’s just more room and opportunity to get into a character’s head than in most other mediums. It’s no surprise, then, that writer and novelist Rainbow Rowell would excel in this regard, but it is a pleasant surprise that she’s been able to translate those skills so perfectly to her comic book work on Runaways. This is a title where every character feels real and three dimensional, more than just archetypes or action stars but like actual kids with actual concerns, desires, deep-seated fears, and the ability to grow and change. Most importantly, Rowell makes us feel the effects of their history, of everything they’ve gone through since first being created 15 years ago.

Now before I get too far, let me say that artist Kris Anka shares just as much credit for how real these characters and their histories feel. Anka’s facial expressions, body language, and fashion choices do so much to tell us about these characters and their emotions before Rowell can even pen a single word. This is especially apparent in Runaways 7‘s diner scene featuring Karolina and Nico. 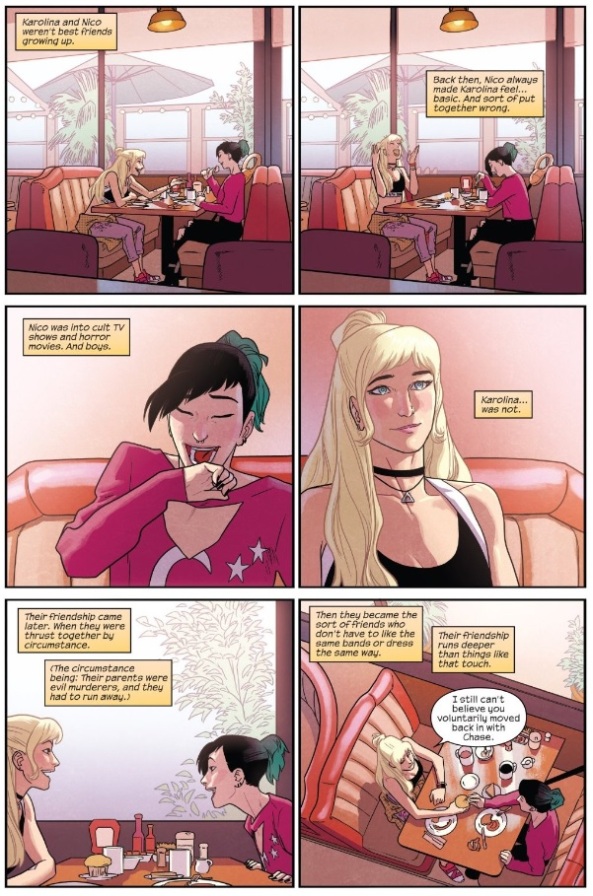 Rowell’s narration does a fantastic job of summing up their friendship and everything they’ve been through, how they’ve grown up together, but before you can even read a single word Anka makes it abundantly clear how fond they are of each other. Their chemistry — be it friendship, familial bonds, or something more — just leaps off the page and smacks the reader in the face. That’s a kind of magic that can’t be replicated easily. Both these creators are at the top of their game (as is master colorist Matthew Wilson), but together they’ve created this vivid world with its own weight and history, and it’s a sight to behold.

I could probably go into depth about almost every single page of this issue, but the other scene that really struck me was the one between Gert and Victor. Rowell digs deep into Gert here, dredging up insecurities about her weight and her body that many other writers probably wouldn’t think of, much less be able to articulate so clearly and devastatingly. What’s beautiful is how cleanly they tie into Victor’s own insecurities, which are born not only from his life as the “son” of Ultron, but from his experiences in King and Walta’s Vision as well. Rowell has a knack for using continuity, not as cheap Easter eggs, but as a tool for giving characters depth and history.

That makes “change” a powerful force in the world of Runaways. The kids are doing their best to handle change, even as they often buck against it (especially Gert). As the issue closes Molly’s best friend Abigail offers to be her best friend forever, in the most sinister way possible. I suspect that Abigail is some sort of immortal — her clothes are old fashioned, her parents ancient, and she calls Molly “the coolest 13-year-old [she’s] ever met” as if she’s met a lot of 13-year-olds — and that her offer could freeze these kids at this age, this point in their life, forever. It might be an enticing offer to the Runaways themselves, but certainly not the reader, because Rowell and Anka have shown us how change, growth, and history have helped to make this cast into phenomenally rich and nuanced characters with real weight behind them. I would never want to lose the opportunity for them to grow further.

One comment on “Growth, Chemistry, History, and Change in Runaways 7”