On the surface, grief and regret may not seem all that similar; one deals with an inescapable force of nature, the other is preoccupied with (potentially avoidable) personal failures. I might argue that regret is a kind of grief, albeit over the death of an idea or an opportunity, as opposed to a loved one, but there’s a more fundamental commonality between these two: how personal they feel. This can make both grief and regret feel very lonely, potentially driving us away from the friends and family who might want to support us through those difficult times. It’s a trap Ivy falls into, trying to go it alone in the face of her own grief and regrets, but Batman and Catwoman (and the entire creative team behind Batman 43) have a better way.

That better way, it turns out, hinges all on the one person Ivy couldn’t willingly turn into a slave (at least, not entirely): Harley Quinn. 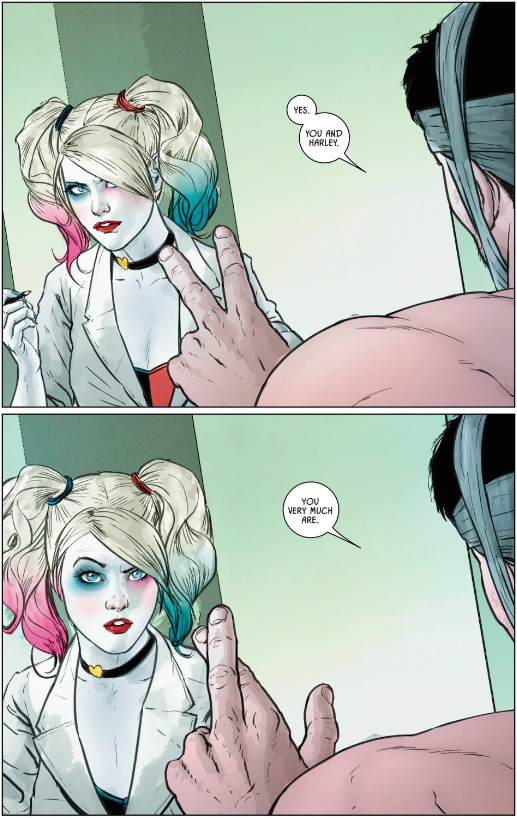 As clear as that may be to my ‘shipping little brain, this issue is actually pretty coy about whether Bruce is referring to a platonic friendship, a friendship that Ivy wishes was more, or an actual romantic relationship, but the result is the same: Harley is Ivy’s rock, the one person who might talk her down from shutting out the entire world.

It’s a credit to writer Tom King that “the entire world” is taken so literally here, both in terms of Ivy’s isolation, and the “Bruce and Selina vs. the World” premise of the arc. Bat and Cat can take on anything together, and Ivy’s resolution suggests that she can, too, so long as she doesn’t try to go it alone. Maybe that moral points towards Bruce and Selina impending nuptials more strongly if we read Harvey and Ivy as a couple, but I almost prefer it as a more general “have someone in your corner” moral. Ivy doesn’t need a romantic partner to be whole, but she definitely needs someone in her corner.

Or maybe I just like broadening the moral to teamwork because it makes for a nice segue to talking about the collaboration of this creative team. As usual, Mikel Janin’s figure work is breathtaking, but I’m increasingly impressed at the big, sprawling spreads filled with figures slowly crossing them.

Spreads like this can often feel empty or dead, but that’s very much the point here — and it’s not like Janin isn’t putting in the effort on those “empty” corners! But I’m also impressed at how seamlessly Hugo Petrus’s pages fit into the issue, thanks in no small part to June Chung’s gorgeous coloring tying everything together.

My point is, this issue is a testament to the power of teamwork, both on the page and off. I can’t be more than cautiously optimistic about Bruce and Selina’s relationship (it sure feels like Bruce is neglecting some of his other teammates in pursuit of this particular team-up), but they keep passing every test this creative team can throw at them. Or is it that the creative team is passing every test Bruce and Selina are concocting?