Spencer: Jane Foster is willing to do what must be done, no matter how hard or dangerous, no matter what the consequences might be, even when nobody else can or will. It’s what makes her a hero, what makes her worthy; it’s also what brings about her downfall. The Mighty Thor 705 is the swan song our beloved Jane deserves, a beautiful, action-packed, heartbreaking issue that highlights everything that made Jane’s Thor an inspiration, everything that made her important both in-universe and out.

The key tenant of Jane’s time as Thor is sacrifice. Every time she became Thor she was killing herself a little more, yet she continued to do so anyway. Why? There’s quite a few reasons, but early on in The Mighty Thor 705 writer Jason Aaron flashes back to the first time Jane lifted Mjolnir to answer that question in six succinct words.

Jane knows that the world, that each and every realm, needs a Thor, and if she’s capable of doing the job, is there any real excuse for her not to? Jane’s heroic for many reasons, including her compassion and courage, but the number one quality that makes her worthy to wield Mjolnir is her willingness to pick it up at all, no matter what it may mean for her in the long run.

Sacrifice is specifically built into Thor’s final battle in this issue, and not just because Jane walked into it knowing it would be her final transformation; she’s also willing to sacrifice Mjolnir itself to destroy the Mangog. That’s another quality that’s always made Jane such an effective hero: she’s not beholden to the same traditions and norms as the rest of Asgard, be it their macho bravado or their reverence for sacred traditions and artifacts.

The God-Hating Mangog specifically zeroes in on Jane’s mortality as making her more worthy than her godly brethren, but he means this in a disparaging sense, claiming that the gods deserve the destruction he brings and insisting that Jane admit this too. She refuses; even though she knows the gods have failed humanity more times than she can count, they’ve also saved them just as many times. Mangog refuses to see anything other than hate; Jane sees the best even in those who have failed her, and that allows her to both live and die full of love.

It’s a sentiment powerfully rendered here by Russell Dauterman and Matthew Wilson. Jane isn’t just willing to sacrifice herself because she thinks she has to, but because her sacrifice will save so many she’s loved as well. Love fuels her, drives her; in this case it quite literally makes her stronger, but throughout this run it’s been her strength metaphorically as well. Love stops her from condemning entire races like the Mangog, from seeing worlds as nothing but conquests or profits like Malekith or Dario Agger, from viewing herself as above others like the Shi’ar Gods.

Jane’s death leaves an aching, gaping hole in the hearts of readers and the Marvel universe alike, and it’s hard not to speculate on how her example will inspire others in her absence. Jane stood up for the gods of Asgard, and in doing so, set an example they could all stand to follow. It seems poised to most powerfully effect the Odinson, who lost his worthiness in the first place because he started to believe Gorr’s theory that all gods deserved to die. Jane life provided an example of divinity that lifts up and helps others; she was living proof that Gorr was wrong.

Of course, I worry a bit about Jane’s tenure as Thor becoming just a piece of Odinson’s story, and I’m also sad that Jane wasn’t able to stick around and resolve the major driving conflict of her entire run (the War of the Realms). Still, Aaron, Dauterman, and Wilson make this final issue of Jane’s story very much about her, about her strength, her love, her dignity in the face of death, and the effect she’s had on those closest to her. I can’t think of a better way to say goodbye to Jane Foster, the Mighty Thor.

As always, Dauterman and Wilson are responsible for so much of the power and emotion behind this issue. From tearful goodbyes and passionate kisses in front of a blazing sun to knock-down, drag-out brawls that quite literally shake the very pages, dislodging and shredding panels, every single page of this issue is jam-packed with talent, hard work, dedication, and love.

To me, though, one of the most impressive pages is one of the quieter ones. 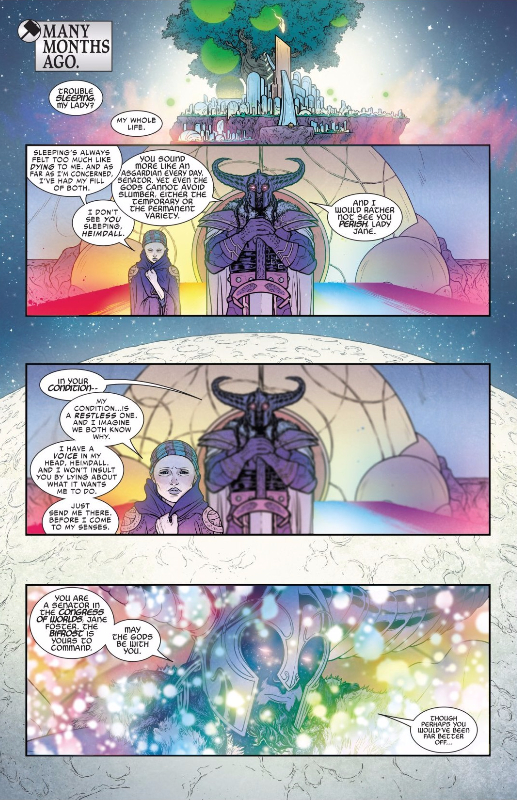 I’ll admit, I’m a sucker for any scene featuring Wilson’s rainbow bridge, and I love the way the focus changes as the scene follows Jane from panel 2 to 3, but what I love most here is how Dauterman transitions from one location to the next. We don’t see Jane actually arrive on the moon until the next page, but by slowly shifting from Asgardia to the moon in the gutters, Dauterman’s priming readers for the change in location. It’s subtle, smart, and classy, all qualities I’ve come to expect and admire from this creative team.

Ryan! How did this final battle of Jane’s hold up for you? Do you think sacrifice is what makes Jane a hero, or should she have found a way to keep on fighting? Do you have any favorite moments from that epic brawl between Thor and Mangog? Or hey, maybe this is just wishful thinking, but do you think Aaron’s got any tricks or twists up his sleeve for next month’s issue? We know Odinson will reclaim his former mantle and name, but with one more issue of Mighty coming down the pipeline, perhaps we haven’t seen the end of Jane’s story just yet?

Ryan M: While Aaron has left space for closure for the story, her death in this issue feels appropriately conclusive. The reader goes into the issue knowing that Jane has chosen to sacrifice her life in this fight. What’s striking in this issue is her conviction. She doesn’t waver for a moment, even as the battle is beyond overwhelming. Through the cacophony of battle, her sentiment is straightforward and her aim is true.

Therefore, the issue is not really about her arc. She is not evolving. Instead, we are bearing witness to her sacrifice. Just as Odinson can only ineffectually protest and then take his place for their final moments, we as readers are here to observe what is already fated.

Aaron uses Odinson as the most accessible point-of-view character in the issue. While Jane is unquestionably the Hero of the story, her behavior is so heroic that it transcends humanity. While Thor is in a fight the she will do anything to win, regardless of personal consequences, the Asgardians reveal their weaknesses. Odin has his eye on Mjolnir, Freya worries for her family and Odinson for Jane. They stand in contrast to Thor’s disposition in battle.

Even after Jane has flung away Mjolnir, she is still on her path. Her final moments with Odinson function as a goodbye, but she was already gone. Odinson may as well be talking to a ghost as he tries to get her to explain. He is moving through anger and bargaining, but Jane doesn’t have time for his stages of grief. Her idea of goodbye is way less verbal and far more epic.

Of course, the angsty romance of a farewell kiss was already likely to light up the shipper-receptors in my brain, but the scene wouldn’t function nearly as well without the excellent art from Dauterman. In the first panel, we have our two larger-than-life gods in a clinch, each covered in the wounds of a battle won. Then, a smaller panel, offering a quieter moment. That of a man and a women whose body is ravaged by disease. Finally, we have the obliteration of fire. Each stage of the page offers it’s own kind of romance, from the triumphant to the tragic to the nihilistic.

Her stillness feels like the only way for this story to end. We were told of her sacrifice and now we are seeing the results. The coloring is also evocative of an earlier splash page.

The greys, blue and reds of Jane’s first time as Thor have an electricity and power. Jane’s smile is perhaps her only moment of pleasure in the issue. The two images above can function as the end pages of her story: the rush of power and the lifeless body left behind. However, these moments can’t address the weight of her choice.

This issue is sacrifice-in-motion and is both inspiring and sad. While it hurts for her story to end, she is leaving the world better for having been a part of it.