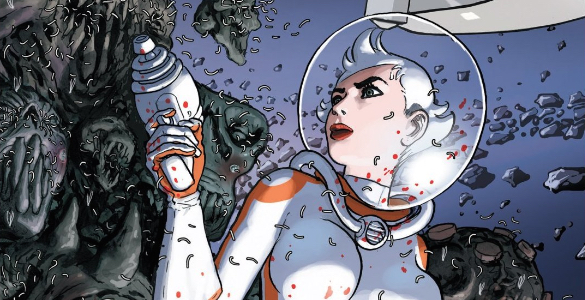 Are science fiction and heart mutually exclusive? One word: Cocoon.

Like any sci-fi fan, I love a good high-concept premise. Those premises give us something to latch onto in the uncertain settings of science fiction, but are ultimately just the hook that draws us into the narrative. For any story — sci-fi or otherwise — to work, it needs to meaningfully comment on the human condition (even if, you know, the characters are aliens or robots or whatever). The story needs to connect on some deeper human level in order to be anything other than a series of things that happen. Unfortunately, Infinity 8 1 is too invested in its own competing high-concept premises to ever make that kind of connection.

To be fair, this issue is saddled with a ton of set up to explain what amounts to an interlocking anthology series. The premise of a temporarily revisable timeline is an intriguing one, but is largely irrelevant to the pages here. Also irrelevant is Yoko Keren’s search for a genetically perfect sire for her young. Neither of these points motivate the plot in any way, but I think the bigger offense is that they undermine the stakes of what is actually going on. Keren’s flippancy about scanning every male she encounters suggests that her mission isn’t all that important or serious, and that’s without noting that it can all be undone, anyway. Even worse, Keren’s search for a mate doesn’t seem to matter all that much to her. Check out her explanation for wanting a kid: 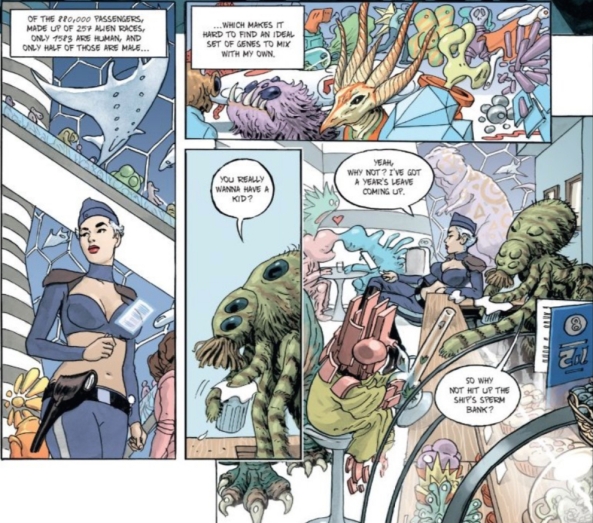 “Why not?” The defining characteristic of our protagonist isn’t that she wants genetically perfect kids so much as it is that she can’t think of anything better to do with her time. But also: her opening narration suggests that she can only mate with male humans, but she proceeds to scan every male alien she encounters, human or no. But only the males, as though sex is a harder genetic barrier to overcome than species. (It isn’t, by the way — scientists are already working on generating viable embryos from the DNA of single-sex couples, though there’s surprisingly little research out there on the viability of humans breeding with aliens). It’s a fucked-up reading of what sex and species are to suggest that women need a male to reproduce with more than they need a member of their own species. And sorry to dwell on this, but if Keren has access to the entire ship’s medical records, why the fuck is she scanning each man she happens to encounter, one at a time? There’s got to be a way to search that database for the characteristics she wants (or excluding the ones she doesn’t want). Shit makes no sense.

The point is, these superfluous details clutter the narrative, preventing it from actually getting anywhere meaningful. Does Keren’s comfort with nudity tell us anything about her character, or does she just take her top off for mild titillation? In either case, could that page have been used for something more pertinent to the story? This story is already impossibly shaggy, which feels like a bad trait for a series primed for 8 parallel timelines. Maybe Keren’s nipples will matter later? I won’t be sticking around to find out.