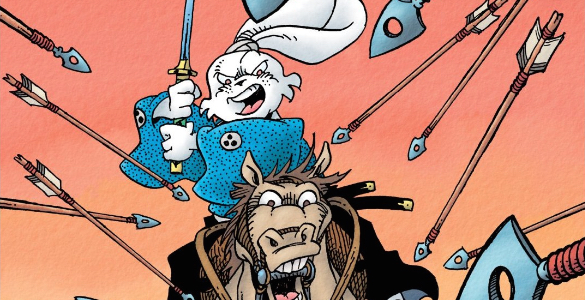 Patrick: I saw the new Wes Anderson movie, Isle of Dogs, this weekend. It’s cute, moody and starkly graphic — it fulfills the promise made by the phrase “Directed by Wes Anderson.” But the film also has a weird relationship with its setting: the Japanese language and and culture represent the alien in its own country. The dogs that we follow around, who are the heroes of this story, are all voiced, speaking English, by white American actors. A note tells us early on that barks and translated into English, but Japanese will remain untranslated (unless when done diegetically). For whatever argument you can make for Anderson’s reverence of the language and the culture (to say nothing of employing a bunch of Japanese actors and film folk), there’s no denying that the Japanese-ness of Isle of Dogs is meant to be novel and out of the ordinary. Usagi Yojimbo: The Hidden 1 takes the exact opposite route, making damn sure that the East is familiar and the West is exotic.

Writer and artist Stan Sakai introduces us to this story from a place of relative ambiguity. Two riders approach the city gates, and the guards hassle them for their papers before letting them through the door. They are pursued by small band of riders who reject the idea that they can even be hassled. There’s an incredibly exciting dynamic right from the beginning, steeped in mystery, but heavy in detail. Robbed of the context of why these riders are in such a hurry — a question that Sakai even puts in the mouths of the city guard — we are left to find meaning in the other details on the page. As is common practice for Sakai, those are the details that bring 16th century Japan to life. 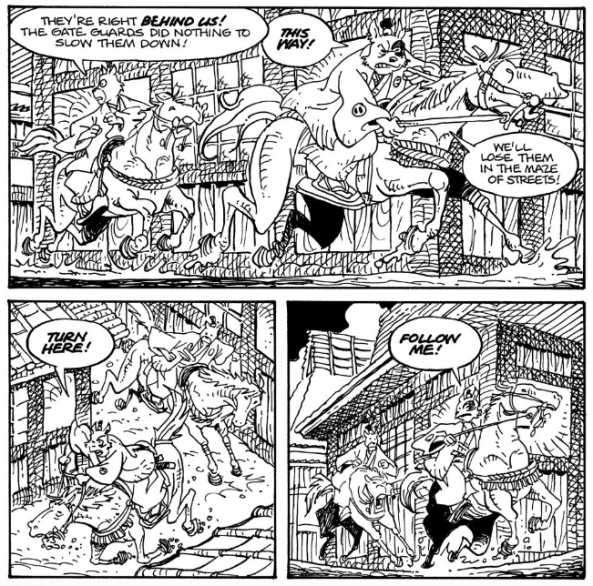 The setting here is so specific — a chase through the narrow streets and alleyways of an ancient Japanese city. Sakai keeps his camera close to his characters, never giving the reader an opportunity to get above the rooftops to try to divine a path through the streets themselves. For the reader and the characters, it is a dense, non-navigable labyrinth. It’s an anxiety-producing setting, made all the more stressful by the fact that both our samurai-hero characters end up dying trying to escape it.

That’s when Sakai finally introduces us to an expert — not an expert in what’s going on, but an expert in the setting. The thief character is at home both between and within the buildings that make up the city. While the samurai hoped to use the inherent confusion of the city to make their escape, the thief uses his actively knowledge to get away. And it’s not complicated: he stumbles into a fabric dyers workshop, and knocks down the supports that are hanging the flags, banners and tapestries out to dry. His pursuers end up thwarted by something very specific to that time and space. Cultural awareness is the best survival tool demonstrated in this issue.

Then, 17 pages into the first issue, we finally meet our actual hero: Usagi Yojimbo. I love seeing Usagi in this detective role, trying to piece together what went down in the first three-quarters of this issue. We learn about what motivated the riders at the same time Usagi does, though a western reader is likely to get ahead of our detective pretty quickly. 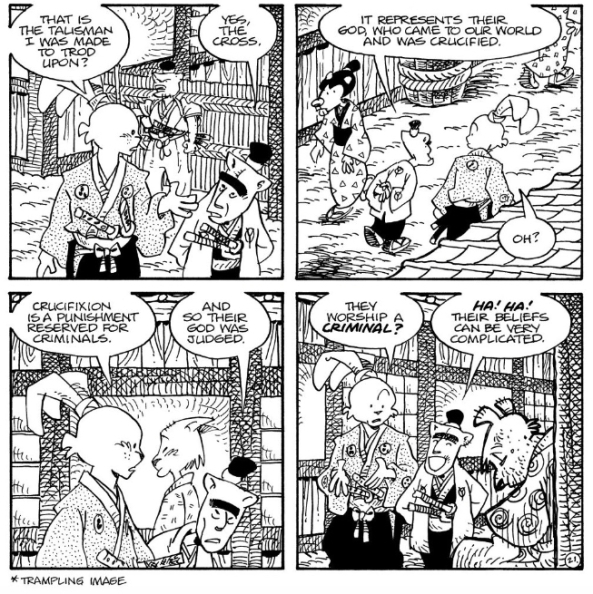 Usagi and Inspector Ishida are calling them “Kirishitans,” and their conversation pretty obviously reveals who they’re talking about while still holding Christians at arms-length. I love Ishida laughing off Usagi’s questions with a simple “their beliefs are very complicated.”

Which of course means that when a dead samurai is wearing a cross around his neck, this too is “very complicated.” At the end of the issue, the mystery narrows for the reader in the same moments it broadens for our heroes. On the very next page, Sakai’s letters column spells out the historical context, further placing us ahead of the inspector and his ronin friend.

Michael, how did you like this issue? I’m a big fan of Usagi Yojimbo, so any excuse to revisit the character or the world is going to be a slam dunk for me, but without knowing what to expect from this series, I could see where it’d be weird to not meet our main character for 17 pages. But I mean, come on, what’s cooler than meeting him like this?

Michael: One of the most famous opening shots in film is the tracking shot that begins Orson Welles’ A Touch of Evil. The film begins with a mysterious figure placing a bomb in the trunk of a car and running away. The perspective/focus shifts to the car’s passengers as it drives away, then to Charlton Heston and Janet Leigh, who are walking on the sidewalk. The tension builds and the worlds grows until eventually the bomb in that car’s trunk explodes. The slow build to the debut of Usagi Yojimbo is not unlike that opening scene from A Touch of Evil. 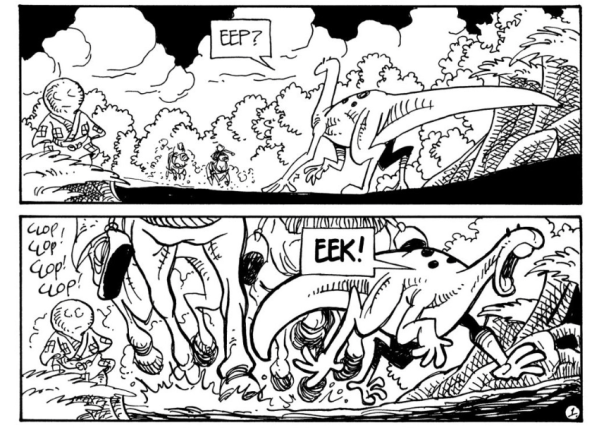 The perspective shifts from a lizard to the fleeing Christians to the door guards to the pursuers to the thief and eventually to Usagi and Inspector Ishida. I really like this kind of opening because it establishes the world that our characters live in without using a long-winded exposition to do so. The pace is incredibly quick — it is a chase after all — in a way that keeps the reader engaged. If you didn’t see the cover of Usagi Yojimbo: The Hidden, then you would be guessing as to what is going on and who the protagonist of the story actually is.

I’m a relative novice when it comes to Usagi Yojimbo outside of the world of Teenage Mutant Ninja Turtles. In fact, there was a three-episode arc focused on him in the final season of the most recent TMNT show — written by Usagi Yojimbo creator Stan Sakai himself.

Patrick’s quick evaluation of Isle of Dogs is the same of what I’ve seen from snippets of reviews thus far. Like The Darjeeling Limited before it, the location of Japan appears to be used as an exotic foreign land for “American” dogs and real-world American audiences. When you’re exploring new worlds or in the midst of a mystery in a story it helps to have a character who is as much of a novice as you. But there’s a better way to do it than having a token white American engaging in some indirect cultural appropriation.

Japan itself seems to be put to use in that context a lot in popular comics, actually. Frank Miller’s interest/fascination/fetish with Japanese culture led to the Canadian/American white man Wolverine becoming an honorary Ronin…for better or worse.

Likewise, Americans are too used to traveling to another country and having their lack of understanding accommodated. There are those who will condemn immigrants who can’t speak English, while those critics themselves aren’t likely to speak a lick of Spanish when they go vacationing in Cabo. Having a protagonist who is actually of that world and culture is a nice change of pace.

The addition of that history lesson in the letters page is a nice touch — I like it even better since it takes place at the end of this first issue and not before. Too often, we are spoon-fed backstory, as if writers aren’t skilled enough or we aren’t smart enough to read context clues within a story. With a couple of brief editor’s notes and some well-placed dialogue, Sakai gives us just enough info to work with. 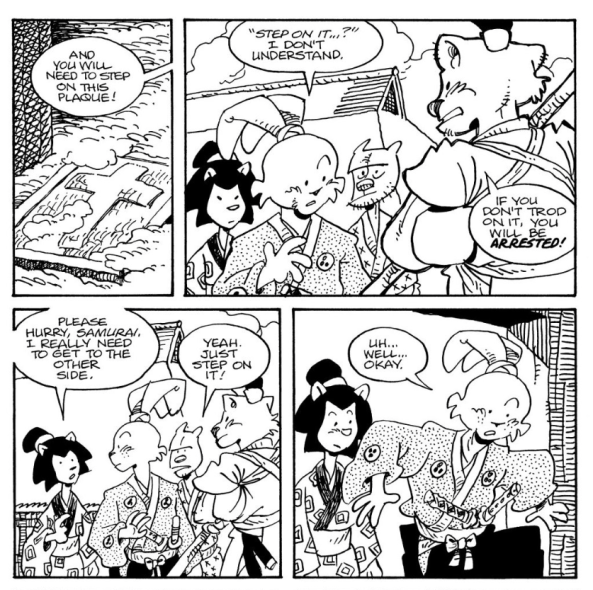 I’ll tell you what, I never expected a comic book about a rabbit samurai to feature the religious imagery and references that Usagi Yojimbo: The Hidden does. However, the expulsion of Christianity from Japan is actually pretty pertinent to our conversation about cultural appropriation. Think of it as if the pilgrims brought Christianity to “The Promised Land” only to have Native Americans eventually rebel against it and refuse to replace their own heritage and religious beliefs — that might make for a different America today.

We never discover what the object was that the pursuers wanted from the Christians, and I doubt it’s that cross seen on the final page. The letters columns page references “Kakure Kirishitan”, which means “Hidden Christians.” Given the title, I think we can assume that our boy Usagi is gonna be helping out some underground Christian refugees escape.