Of the many crimes The Man of Steel committed against Superman, its greatest was having him snap Zod’s neck at the end of the film. Superman is a hero who not only doesn’t kill, but who is always supposed to find another way, a better way, to deal with his problems. Forcing him into a situation where his only option is to kill not only shows a grave misunderstanding of the character, but a lack of imagination on the part of the writers. Teenage Mutant Ninja Turtles 80 places Splinter in the role of Man of Steel‘s Superman, the “hero” who believes he has no choice but to kill, but the Turtles have to believe they can find another way to deal with the Triceratons. Writers Kevin Eastman, Bobby Curnow, and Tom Waltz reveal their priorities to be in line with the Turtles’ when they unveil that better way.

The solution comes courtesy of April and Donnie, with a little help from Stockman and the Utroms. 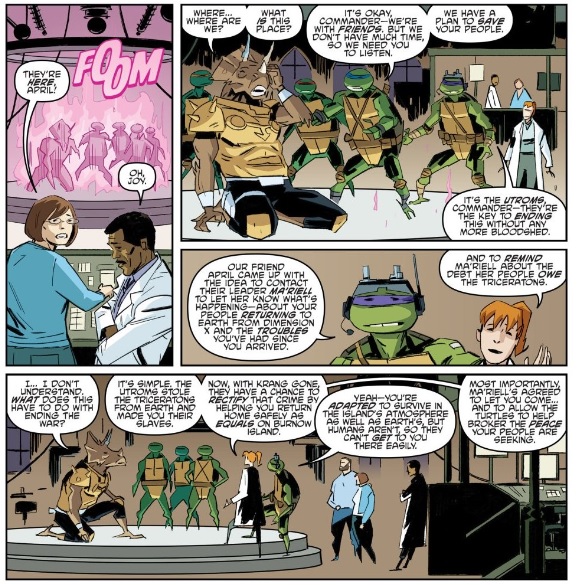 It’s a clever outcome, one that manages to satisfy nearly all involved parties (Bishop and the EPF are pissed, of course, but Splinter is quite proud of his sons’ ingenuity), and one which builds off previously established events and motives — April even manages to save her job by making sure that Stockman gets hailed as the hero of the conflict. As always, I’m impressed by the TMNT creative team’s long-term plotting, but I’m more impressed by the precedent this sets for the series moving forward.

This victory reaffirms the Turtles’ dedication to finding ways to win that don’t involve death, killing, and war, and it continues to put them in opposition to their father, Splinter, and the Foot Clan. Notably, Splinter took control of the Foot Clan in the first place by killing Shredder, a move that, at the time, seemed as unavoidable as Superman’s murdering Zod was meant to, but in retrospect, was clearly the start of Splinter’s fall from grace. This IDW run of TMNT has notably been more mature and complex than many previous incarnations, but I appreciate that this creative team doesn’t think that being mature means wholeheartedly embracing murder, violence and death. This series’ commitment to finding another way means that Splinter and the Turtles will likely remain in conflict for the foreseeable future, but it also leaves a lot of hope that, eventually, they’ll find a way to reconcile. It’s not a battle anyone, in-universe or out, wants to see end badly.