Taylor: Back in August, my wife and I packed up all of our worldly belongings and moved from Chicago to Denver. We’ve greatly enjoyed our new digs for the most part, but this doesn’t mean the transition was without its trials. I had lived in Chicago for nearly ten years, so moving to a new city meant saying goodbye to a lot of things and people I knew. I feel lucky to have undergone this momentous change with my wife, who has been a rock through it all. Point is, when you go through a big change, it’s always nice to have someone by your side, as Saga 50 illustrates.

Changes are coming to Alana and Marko’s ragtag crew. Prince Robot, Petrichor, and Squire are splitting with the main crew so they may have a chance at gaining new bodies to live in. This means that what little stability their presence afforded Hazel and her family are soon coming to an end. As Hazel points out, this is a difficult change because no one seems to recognize the importance of the event.

This statement essentially serves as the thesis of this issue. As everyone prepares to make their own plans, no one seems to recognize that the splitting of the crew is a big deal, most notably for Hazel herself. This feeling comes to a head when Petrichor tells Hazel that she won’t be joining her family in the future. For Hazel, this is a hard thing to accept.

Kids take change hard, especially when it means that a trusted adult will be leaving them. Poor Hazel doesn’t totally understand the reasons for Petrichor wanting a new body, and instead only sees someone she loves leaving her. For Hazel, this is an event that demands commemoration, but Petrichor basically refuses to allow that to happen. Instead, she just continues with their training.

What makes this change even harder for Hazel is that Squire will also be leaving. This means that the one person she could relate to based on age is abandoning her, too. This being the case, Hazel is left to face these impending changes to her life on her own. She has her parents, true, but as we all know, it’s difficult to entrust parents with being our confidants in addition to their regular duties. Further, the absence of any ceremony marking these changes means that Hazel will have to internalize them. How that will affect her in coming issues will be interesting to see.

These same changes that promise to affect Hazel don’t have nearly the same effect on other characters in the issue. Marko and Alana, for one, seems unfazed by what’s coming next. They are nonchalant in the face of the imminent departure of members of their party — and their own leaving, for that matter. There’s a lot of reasons why they might be acting this way, but perhaps the most convincing reason is that they know they can depend on each other when things begin to change.

As Marko says after they finish a bout of lovemaking, they aren’t working on their lives alone. They’re working together as a team. Inevitably, this means that dealing with change, or any other hardship is easier. When you know you aren’t going to be facing difficult things alone, it’s much easier to cope with them. Because of this, these two are facing the coming changes with a sense of ease and aren’t concerned with marking them with any sort of ceremony.

The theme of weathering hard times with a trusted partner is also apparent when Robot questions Doff and Upsher about their motivations in covering the war and putting themselves continually in danger.

Upsher says it’s because they were ready to die the day the war started, but it seems like there’s more to it than that. Given that he and Doff passionately kiss just a few panels later it seems clear why they aren’t afraid. They’ve had each other through all their trials and frankly that has made things easier for them. They don’t fear what Sir Robot has to say because they know that whatever dangers come next they’ll at least have each other to help mitigate them. Maybe that’s a bit romantic, but speaking from personal experience, having someone there with you always helps in a hard time.

Ryan, what did you think of the issue? Anything stick out to you, perhaps the cliffhanger at the end?

Ryan M: Seeing Billy in his new guise as “The Help” is a bit of a punch in the stomach. His lack of autonomy stands in contrast to the rest of the characters in the issue. Even Squire chooses to exercise a level of self-government with his choice to run away. Each of the characters in the scenes before the final one are proactive in their choices rather than reactive. Billy is reduced to begging; a caricature of his former self.

Taylor, I think you hit on something really interesting in your discussion of the effect of these changes on children. Staples and Vaughan illustrate how Hazel and Squire are dealing with the choices of the adults around them. Hazel is unhappy with Petrichor’s choice and response to questioning being a variation on “because I said so.” Hazel spits a spell with such venom that she destroys the target and seems to surprise Petrichor with her intensity.

Staples puts Hazel in the background of the panel above, but the child’s stance is clear: she is pissed. Her hands in fists, and her scowl visible even from the distance, its clear that Hazel’s mood has changed from her previous kicks accompanied by “KAPOW!” There are subtle moments in the scene. Hazel looks down at her bracelet just in time to miss Petrichor wipe a tear from her eye.

Squire also has a scene with the adult figure that will soon be lost to him, but the power dynamic is much different. Ghus is hesitant and unsure while Squire is spitting the party line about his duty to his father’s wishes and coldly assessing and giving his things away. He plays the role of stoic son right up until he is sure that he alone. Then, and this is the part that made me so sad for him, he pulls out Ponk Konk, which Hazel (rightly) accused him of stealing last issue. 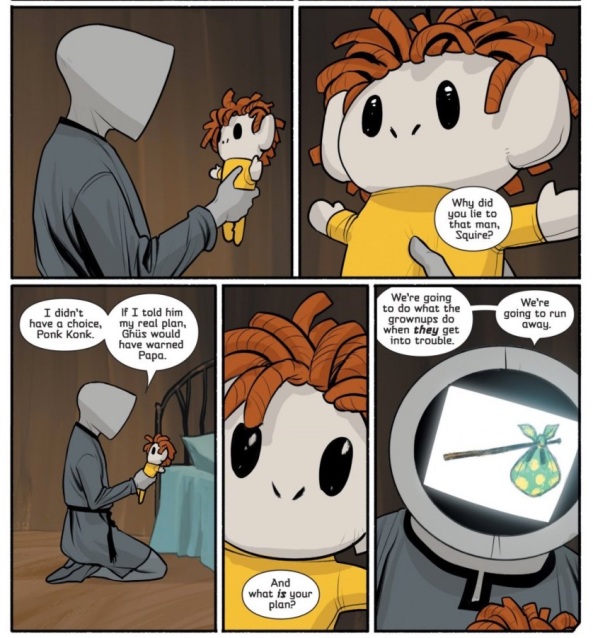 Now, Squire drops the artifice and begins acting like the child he is, having a dialogue with a trusted toy and making plans that are secret from the grown-ups. It’s a sweet sequence, made more so by the way Squire kneels holding Ponk Konk as if the doll is his only friend. Of course, its underscored by the thing that any adult reading this knows very well. This is not a good idea. Squire is still a boy and, while he may have seen in modeled in the adults around him, it’s not a strong policy for dealing with problems.

It is true that the adults are finding strength and security in their pairings, but they better keep an eye on the kiddos or something could go terribly wrong.