By Patrick Ehlers and Drew Baumgartner

Patrick: I listen to a lot of Slate’s Trumpcast. Y’know, because the president has me in a nearly constant state of low-key panic, and I feel utterly powerless to stop our democracy from crumbling, so like, might as well listen to a podcast about it. One of the things that comes up on the show pretty often is the idea that we need to let go of the idea that there is one smoking gun that will implicate the administration and the president himself in collusion with the Russian government. There is no evidence so ironclad that it would force impeachment. Further, impeachment and removal from office would not address the systemic problems with corruption, bigotry, and foreign interference. There’s no “one solution” because there is no “one problem.” Gerry Duggan and David O’Sullivan’s Analog 1 takes a very specific speculative high-concept pitch, and gradually reminds the reader of everything else that is intriguing and terrifying about their world — there is no “one problem.”

That concept is simple: the cloud burst, and everything that was once private on the internet is now public. If that sounds like a familiar slugline, it may be because Bryan K. Vaughan, Marcos Martin and Munsta Vicente published Private Eye five years ago, and the premise is more or less the same. We loved Private Eye, but it never really moved off the idea that privacy was a commodity. That’s a fascinating idea and the creators did a great job of marrying it to a sort of Neo-Noire Los Angeles, but whatever else was going on in the world was sort of a mystery to the reader. Analog takes this same concept, but remembers the rest of the world.

This immediately makes this series feel like more of a reflection of the real world than some kind of techno-fantasy-nightmare. Our hero, Jack McGinnis, mentions that flood insurance has become prohibitively expensive for the residents of Queens. Duggan is playing coy here, but the implication is obvious: Queens has flooded a couple times in the six years since 2018. So while we’re painfully aware of Jack’s job as a courier of secrets in a post-internet era, we are reminded that global warming is a problem. Jack laments driving through the midwest because everyone in the driverless cars are “eating, sleeping or jacking off.” Jack passes a couple fucking in a car and asking for the make of the vehicle because “one of [their] patrons want to know.” It’s a rich mosaic of natural disasters, isolation, and intense exhibitionism — essentially an exaggeration of the world we currently live in.

Duggan and O’Sullivan seem particularly interested in the isolation angle, and but I’m not entirely convinced they see physical distance as demonstrative of social distance. The issue starts with Jack in a stand-off with some bad dudes that want to steal his secrets. He warns his would-be-assassins that he is protected by a sniper, and O’Sullivan immediately swings to a wide perspective, suggesting that this shooter could be anywhere.

This is Oona’s perspective. Other than on the title page, we don’t actually get to meet this character — and even then, O’Sullivan keeps her face from us. Duggan also withholds all possible details about this character. She seems to live with Frank in New York, and he makes a point of mentioning that without her there, he’s “sleeping alone for a few days.” But anything else we know about her is a guess or an inference. They’re almost not in the same story, but their relationship must be important. Distance, and their shared isolation, doesn’t prevent them from interacting with each other and being meaningful in each other’s lives.

We are reminded of that every time O’Sullivan goes wide and shows us the whole of downtown St. Louis. It’s easy to draw a strong thematic line between this contradiction of intimacy and distance and social media. In a flashback to 2020, Frank meets  Allan Oppenheimer, the inventor of an unnamed social media platform that was exploited by the Russians to influence the 2018 Presidential Election. Both Frank and Duggan’s depiction of Oppenheimer seem pretty antagonistic toward the character. Naming the character “Oppenheimer” has obvious sinister implications about anything he introduces to the world. But we can criticize Facebook (dropping the pretense now for clarity) all we want, isn’t it only offering what we see Frank and Oona demonstrating in the first couple pages of this issue?

Drew, what’d you think here? I do think it’s interesting that for as much as Duggan does play prophet in this issue (especially considering that this issue would have been in progress before the news about Cambridge Analytica broke a few weeks back), he’s careful not to throw around real names of people or companies. Zuckerberg, Facebook, Trump, Putin, all absent. Even the car the Patreon fuckers are boinking in has a made-up name. What do you think that non-naming accomplishes? Also, I agree with Frank: there’s no good reason to go to St. Louis in January.

Drew: Actually, that it’s snowing in St. Louis at all might be another sign of global warming. Some quick googling suggests that St. Louis gets about half of the snowfall of “The Average US City,” and that it typically only snows an average of 14 days per year. This scene could obviously be set in a still-rare snowfall in St. Louis, but the rules of narrative efficiency would suggest that this is may be typical of St. Louis in 2024.

Speaking of narrative efficiency, I absolutely love that we meet Jack halfway through this job. We don’t know anything about him when the story picks up, and his introduction doesn’t give us much to go on:

We know that somebody always tries to kill him in St. Louis before we see him. We see that he’s gravely injured before we know his name. We don’t know what the company is, but we know that he’s maybe killed two goons already. These are smart storytelling choices by Duggan to keep us wanting more information, but I’m particularly impressed by O’Sullivan and Bellaire’s insistence on the severity of Jack’s wounds. From the pool of blood he’s already sitting in to that drip-dripping of it off of the bench in the fourth panel, we’re constantly reminded that he’s losing a lot of blood, adding urgency to the scene before we fully understand who the players are.

But then Jack’s confidence takes over. He lays out exactly how the rest of the scene is going to go, and it unfolds exactly like he says. It’s a fun bit of action, but wouldn’t mean a whole lot to us if we didn’t already know that he has a rifleman posted up somewhere else, and that he and that shooter would be racing to kill the guy in the middle. It’s vital context that fills what might otherwise feel like a perfunctory page or two of action with meaningful character beats. 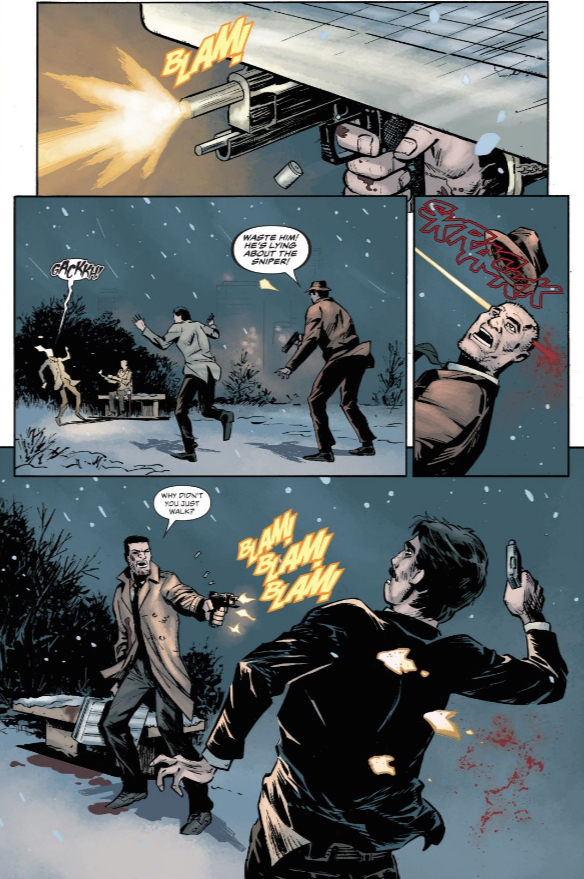 Also, I love how timeless this opening feels. Between the trench-coats and lack of technology, this scene could reasonably take place any time within the past 60 years. By the time Duggan and O’Sullivan finally reveal the near-future setting of the series, we’re already hooked by Jack’s prowess (and sense of humor).

And that’s not to say this issue is without its exposition. There’s plenty of text catching us up on how the world works (and why), but by delaying it to after this bravura cold open, Duggan gives us a reason to sit through it all. The action-y hook followed by exposition followed by a cliffhanger is comics storytelling 101, and its success here really demonstrates why that became the formula in the first place.

Speaking of that cliffhanger, I’m not sure we have enough context to guess who is after Jack’s dad, or for what reason, but we’re given enough of the story to send my mind spinning with theories. For my money, that’s maybe the best kind of cliffhanger — it’s not the suits waiting to kick the door in that have me excited, it’s finding out why. Maybe this has to do with Jack, maybe it’s whatever data was released about his dad when the cloud came down, maybe it’s something totally different. We’ve only started to explore this world, so there are plenty of surprises left to be had.

All of which makes this a tight little first issue. Each beat does exactly what it needs to — and more importantly, feels fresh. From clever action to eerily prescient world-building, Analog is a series to watch.