Patrick: Where does power come from? I’ve been seriously grappling with this one since Trump was elected to the White House, but this question obviously extends waaaay beyond that fucking monster. Does power ultimately come from money? From social connections? From one’s willingness to sacrifice their friendships? From violence? From non-violence? As the battle between Wilson Fisk and Daredevil reaches a fever pitch, questions of where either of them gets their power are posed right alongside the question of where Daredevil 600 gets its power. This is a six-hundredth issue, after all — so what makes this one special?

Let’s start by turning the first question on Fisk himself. This is something a lot of us wrestle with — how does the evil shit elected to office continue to hold the power of that office? Fisk is posing himself as a Rule of Law Mayor, staging a sting that brings in the city’s nastiest crime bosses (himself excluded), and the heroes of Hell’s Kitchen. This is Fisk spending the capital he’s built up elsewhere in his life. The only reason he’s able to assemble Owl, Black Cat, Diamondback and Hammerhead in one place is because they all ostensibly trust him. 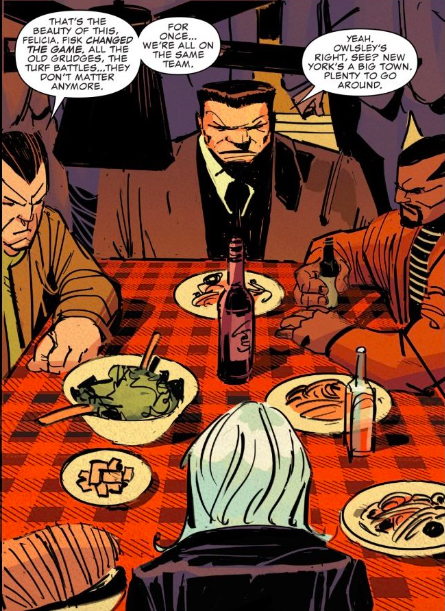 Look at these suckers — they don’t suspect a thing. I love the dinner details here — Artist Ron Garney doesn’t spend a lot of time rendering the food, but just enough to show that they’re having a nice relaxing Italian family-style meal. It implies comfort — family. Charles Soule has written a cast of villains that can believe that Fisk is simultaneously the crime boss they remember and the Mayor of New York City. Their assumption is that he will use his power to benefit the criminal class, of which he is a part. But Fisk proves himself to be looking out for number one, capturing all four to his own political gain.

But the other way Fisk is leveraging his past against his present is in his encounter with Daredevil. He has a history of getting the shit kicked out of him by the Man Without Fear, so he welcomes any bruises and broken bones as evidence that he needs to take the vigilantes off the street. Fisk is trying to use peace to play off an expectation of violence, and this is one place where Matt is one step ahead of him… sort of…

Daredevil actually seems all over the place in this issue. He doesn’t have a single clear line to power in this issue, because that’s generally not how virtuous people operate. Oh, he tries a bunch of things, but nothing seems to work. He tries going in with a full team of superhero friends (including Spider-Man), and he tries going in solo. Both missions end badly. He tries fighting, he tries not fighting, either way he ends up in cuffs. That decision to make between fighting and not fighting is echoed in Blindspot’s fight with The Muse. Ultimately, the demonic force within Blindspot wins out, revealing the one true thing about power: you do have to pay for it eventually. 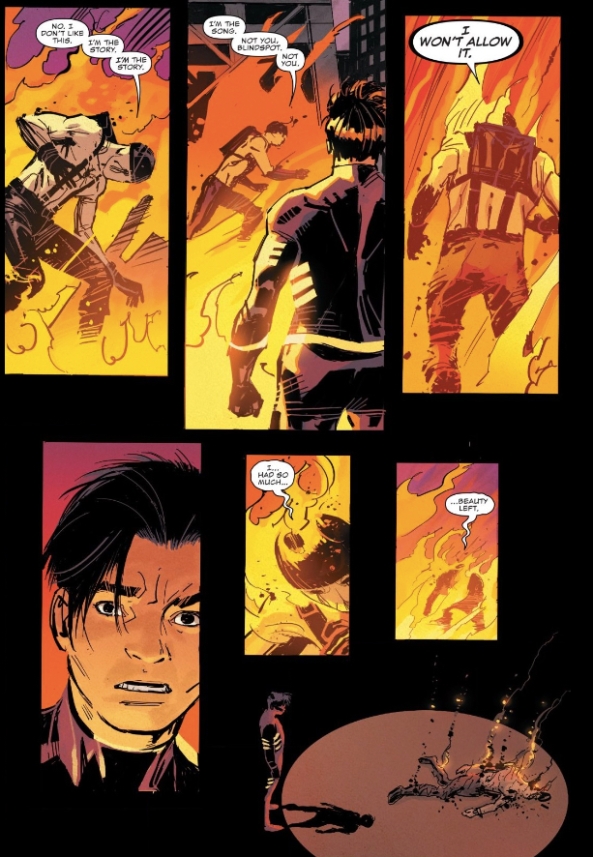 Garney doesn’t spare us the grisly details as Muse crumbles into a smoldering heap on the ground. Blindspot has been exercising this power for a while now, and his number is up — time to face the consequences of cashing in that supernatural capital.

The issue itself is also reaching for a kind of power. We’re talking about a 600th issue blowout here, clocking in at over 40 pages and costing the comic fan a few extra bucks. It’s interesting to see what the creative teams does to make the issue special. Where does the power of a long-running comic come from? More importantly, where does the power of a Daredevil comic in 2018 come from? Soule and Garney are trying literally all of it. From the very first page, we can see the team leveraging the popularity of the Netflix series to excite their readers. I mean, what other reason would any creator have for putting Spidey so far back in the mix?

There’s an accessibility on display here, with the four titular characters of the Defenders television series front and center. But the “friendly to newcomers” card isn’t the only trick in the deck. Soule is also playing the zeitgeist card, as evidenced by my now-probably-too-common mentioning Donald Trump in the intro paragraph. This comic is the result of both the television landscape and the political landscape of this exact moment in time.

This last ingredient may be the one that makes this issue so successful. Soule and Garney are perhaps foremost drawing power from the comic itself. They are decidedly telling a story that they have been working on since June of 2015. That’s the story of the source of Blindspot’s power. Newbie-friendly, topical, part of a story in the works for the last three years. Plus, if we want to toss the last three years out and just enjoy Daredevil in the abstract, Christos Gage and Mike Perkins follow up the main story with a Foggy Nelson feature. “They Also Serve” shows the sum total of 50 years of Daredevil comics as gruelingly experienced by Matt’s perpetual sidekick. There’s not much story here… er… there’s a ton of story, but it’s all been told before. But through a montage of Foggy’s friendship and service, we are whisked back through the entirety of Daredevil’s history.

That feels like one totally holistic approach to expressing the appeal of Daredevil, without resorting to a ton of one-off stories from old creators. Ryan, how would you describe your relationship to Daredevil? And did any of the approaches here tickle your fancy more than the others? Also, the issue ends with Matt Murdock (while still in cuffs as Daredevil) becoming Acting Mayor of New York — how’s that for some classic Daredevil stumbling into fortune? Or WAS THAT THE PLAN ALL ALONG?

Ryan D: For me, Patrick, Daredevil took a prominent place in my list of favorites during the Bendis/Maleev run of the mid-2000’s, so I’ve often held the title to very high standards. Because of that, I’ve had mixed feelings regarding Soule/Garney’s run, particularly with the art direction and nebulous qualities of the story towards the beginning. Recently, however, with the induction of Fisk to his new political position coupled with Garney slightly augmenting his pencils for cleaner, sharper lineation, the series attains a level of captivating clarity.

Perhaps the most alluring part of this arc and this issue must be, for me, the fact that I’ve seldom seen Matt Murdock so blinded (sorry) by his own personal biases and his vendetta against Fisk. Murdock gives neither Fisk nor any of the Mayor’s decisions any quarter, assuming foul play on any decision Fisk makes which runs contrary to Murdock’s opinions. However, the audience and Murdock still have precious little evidence proving that the former Kingpin acts out of evil intent. Can we accuse Fisk of opportunistic tendencies and utilizing political power for personal gain? Absolutely. But most — if not all — of the Mayor’s decisions in this arc have been made with the betterment of New York City, or at least Fisk’s ideal of NYC, in mind. 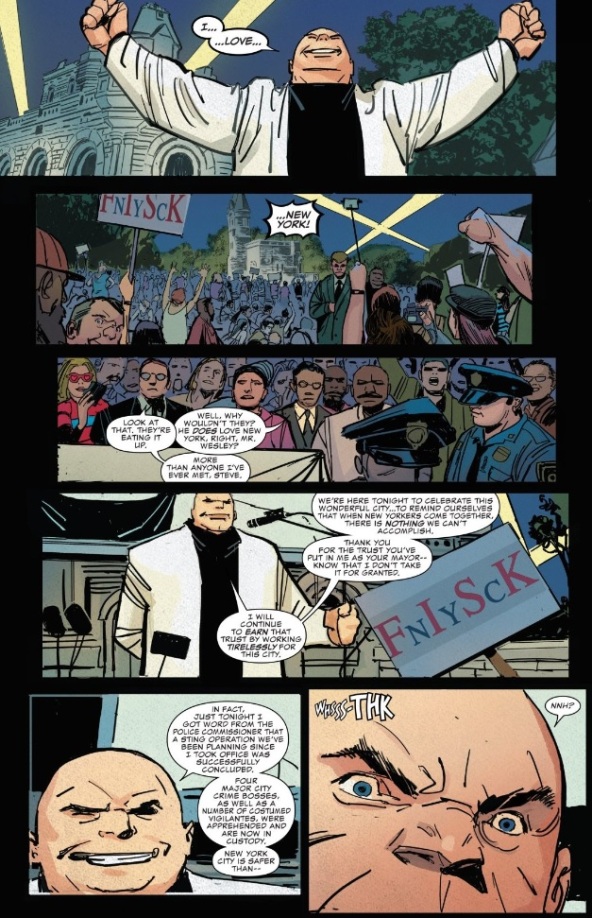 Do you not believe Wilson when he shouts his love for this town? If he’s lying, than I believe that he’s not only fooling me and himself, but also the 200,000 New Yorkers who attend this rally of their free will to support their divisive mayor while the city is in fear.

It reminds me of good (bad?) ol’ Vincent “Buddy” Cianci. During Buddy’s second run as Providence, Rhode Island’s mayor (his resignation during his first being forced by assault charges levied against him), Cianci helped orchestrate what is now known as the “Providence Renaissance,” during which the city redefined itself into an incredibly arts-centric and tourist-friendly destination attracting technology firms, artists, and the further development of small businesses in a model copied by the likes of Baltimore, MD. In 2001, however, Cianci was indicted “on federal criminal charges of racketeering, conspiracy, extortion, witness tampering, and mail fraud.” (Wikipedia) Essentially, he was a mob guy. But here’s the real kicker: after serving his mandated five years in federal prison, and with sexual assault allegations from 1966 against him being brought into the argument, Cianci almost became mayor AGAIN in 2014, losing in a narrow 52-45% decision. My point being that a politician who is corrupt as the day is long can still be beloved for the positive changes they bring. New York City is no stranger to this after seminal politicians like the infamous William “Boss” Tweed. A 2009 New York Post article laments the departure of the departed, corrupt-yet-efficient politician in the contemporary landscape by bewailing, “Now we have the theft without the services, crushing taxes without representation…We get neither great theater nor mere competence. Bring back Boss Tweed!”

I’m not here to offer a philosophical argument about the nature of a “good” politician, but who is Matt Murdock to be such a hypocrite? Last issue, he gave Blindspot the high-ground speech about how going after someone in the name of vengeance leads to no good when Blindspot decides to provoke and pursue Muse, but this entire arc revolves around Daredevil trying to spite Fisk, whether justification presents itself or not. Even when the first plan at the Italian eatery goes pear-shaped and Spider-Man implores DD that “Murdock’s our only shot,” Matt still confronts Fisk as his costumed, horn-headed alter-ego on a rooftop — a move which carries inherent confrontational connotations. So he falls to Fisk. Like you said, Patrick, there’s no line of power for Daredevil here, and I think that must be a result of him operating from one of his least morally-tenable positions. This isn’t the fault of excessive Irish-Catholic guilt or an overactive imperative for self-sacrifice and carrying burdens for others, and this lack of nobility on Murdock’s part spells his failure.

So maybe I found the deus-ex-ninja ending to this issue to be a bit hollow and out of left field. Instead of some morality tale decrying Matt’s current fallible efforts, he’s awarded the position of mayor in what is certainly some of that Daredevil fortune-stumbling. Ultimately, this offers some incredibly interesting narrative potential, but the Matt Murdock presented of late who struggles to find the balance between his life as a vigilante and a public servant might end up an even worse mayoral candidate than J. Jonah Jameson. Maybe now we’ll see whether the power here comes from the title of elected official, or a united clarity of vision between lead character and the creative team.