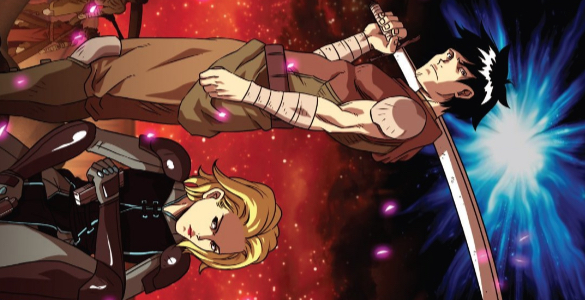 Last month, Mark likened Betrothed to a manga series, citing a number aesthetic and thematic similarities. That observation is astute, but perhaps incomplete. Writer Sean Lewis and artist Steve Uy aren’t just playing the greatest hits of the manga medium, they’ve got the sheet music for The Hero’s Journey on the stand in front of them, and are dutifully playing every note Maestro Campbell wrote. The second step on this journey is the Refusal of the Call to Adventure, so that is precisely what Kieron and Tamara do in the second issue of Betrothed.

Unfortunately, it means that their motivations for are based in increasingly broad tropes about teenagers. There’s an artificiality to just about every decision our heroes make. Tamara and Kieron are faced with the following challenge: either kill or wed the other. Those are huge life decisions. Like, this is the kind of thing that would stress anyone out. Our heroes could have any number of complex or unique reasons for refusing to participate in such a life-altering adventure. But Lewis decides to focus Tamara’s anxiety around one particular aspect of her character: she is a virgin. 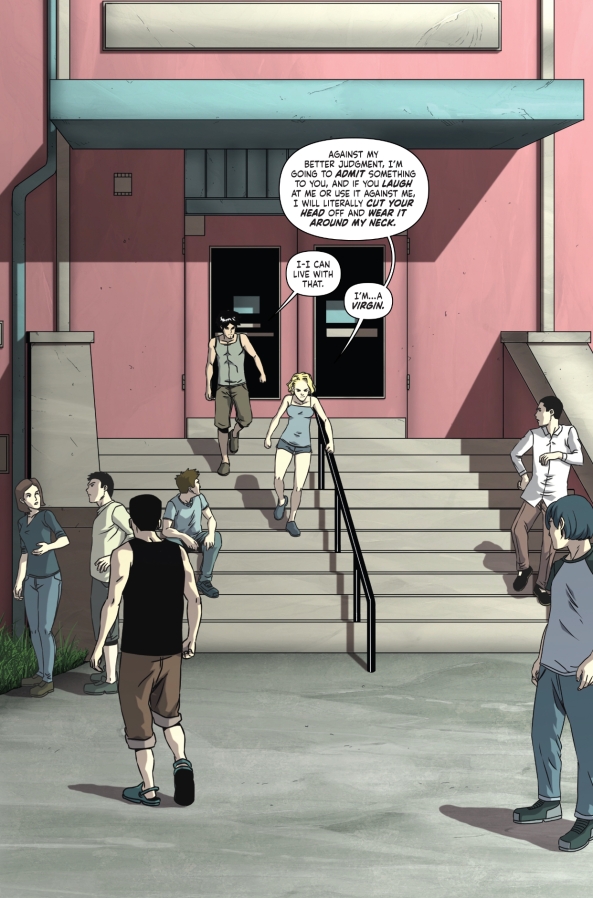 That’s a splash page, right there. Uy and Lewis are using the visual language of comics to insist on gravity of Tamara’s statement. This is the kind of move usually reserved for Spider-Man standing defiantly against the Green Goblin or Superman punching Bizarro’s teeth out.

Both the page, and the moment, stand out for other reasons. First of all, look how small our heroes are on this page. Tamara is confessing something in this scene, and whatever we may feel about sexuality or chastity, she makes her values clear when she threatens to kick Kieron’s ass if he ever tells anyone. Uy’s wide camera suggests that Tamara’s values are perhaps less driven by her character and more driven by her setting. High school.

Uy fills out the rest of that page with dudes all sorta leering at Tamara and Kieron. Off to the side, we can see a young man and a young woman having some kind discussion where the woman has turned her back to the man. There are gender and power dynamics whirling around this page, and at the center of this vortex is Tamara and the word “virgin.” For me, it strains credulity that the character would just say that — especially in this moment when she sure-as-shit doesn’t feel safe. It’s one of those artificial moments, ripped not from the Hero’s Journey, but from Teen Dramas.

So while the pastiche broadens to include more genres than the manga-fueled first issue, the series has yet to break through to express any of its own values.